March has a lot of signifiers. For some, it heralds the start of baseball season. For others, college basketball’s March Madness is the focus. March is “Music in Our Schools” month, and March is when town meetings convene. For me, March has always been about the Maine Principals’ Association One-Act Festival.

I’ve been attending the festival, with the exception of my years in college and grad school, since 1995, as a freshman at Mt. Blue High School in Farmington. Sometimes I performed in the play and sometimes I went as a makeup or costume assistant, just for the sake of watching other students perform and making friends.

In 1998, North Haven Community School was mysteriously districted into the same regional festival as Mt. Blue, and I saw its incredible production of the play-within-a-play from “A Midsummer Night’s Dream,” under John Wulp’s direction. It won first place, and took the state title as well.

It was my introduction to the island that I now call home. I became friends with the cast, and came out to the island to see it perform “Red Eye of Love” that June. Seven years later, when I got the call from Tom Marx inviting me to apply for the job of theater teacher on North Haven, I already knew the quality of production islanders were accustomed to.

We rehearse the show in January and February, wedging it in among basketball practice and homework. It’s been an extracurricular show, and lately an elective course during the school day, which allows the basketball team—most of the high school—to participate.

In the 11 years I’ve spent on North Haven, we’ve only missed the festival twice: once due to a flu outbreak and once because we just weren’t ready. We’ve brought ancient Roman comedies, and modern humor by Steve Martin, David Ives and Wendy Wasserstein. We’ve brought David Mamet and turn-of-the-century psychodrama. We’ve brought original shows by students and community members, and we went that route this year, with a show written by senior Adam Murphy.

Getting to the festival is a feat in itself. Until last year, we were the only island school to compete. Getting scenery on the boat imposes size and volume restrictions in a festival where it sometimes seems that more is more. Hotel costs comprise a majority of my show budget, where most other schools commute back and forth from their homes, even after the late-night awards ceremony. And we have yet to replicate the success of 1998. There were a few second-place finishes before my time, but since 2006 we haven’t broken third place.

As March approaches, I ask myself why we go. The answer is always the same: We go because the students want to. For them, the one-act festival represents a rare opportunity to see other plays, with other directors and designers. It can mean a chance to make new friends, or to visit friends from other area schools whom they might only encounter on the basketball court. They get to perform in a theater several times the size of our little proscenium space at Waterman’s Community Center, in front of an audience with more people in it than live on North Haven.

This year, we barely fit our set in the school bus, overflowing into a truck with a willing driver in the ferry line. Hotels were jam packed for the Fishermen’s Forum, which is held on the same weekend in Rockland, but we squeezed eight students and two chaperones into three rooms at the Old Granite Inn. The cast performed Adam’s hilarious Western farce exactly as rehearsed, each beat yielding more laughter from the audience. Lights and sound happened exactly on cue, and our set managed to fill the stage at Oceanside High School. The thoughtful panel of judges gave accolades for the original script, and constructive feedback on how to improve the production. We placed fourth by a whisker.

For many of the actors, it was their senior year, a final chance at a trophy with comedy and tragedy masks in gold at the top. “I just wish they could see where we come from,” one of them said as we loaded the set back into the bus at the end of a long night. It’s tempting to use our geographic and demographic challenges as an excuse, but they’re better served as an incentive to prove what island schools can accomplish on stage, on the basketball court, and as we send our students out into higher education and careers.

Each year without a trophy is a chance to grow, and each year’s return to the festival is a testament to the resilience of island students, and their willingness to seize an opportunity to enrich themselves and try again. 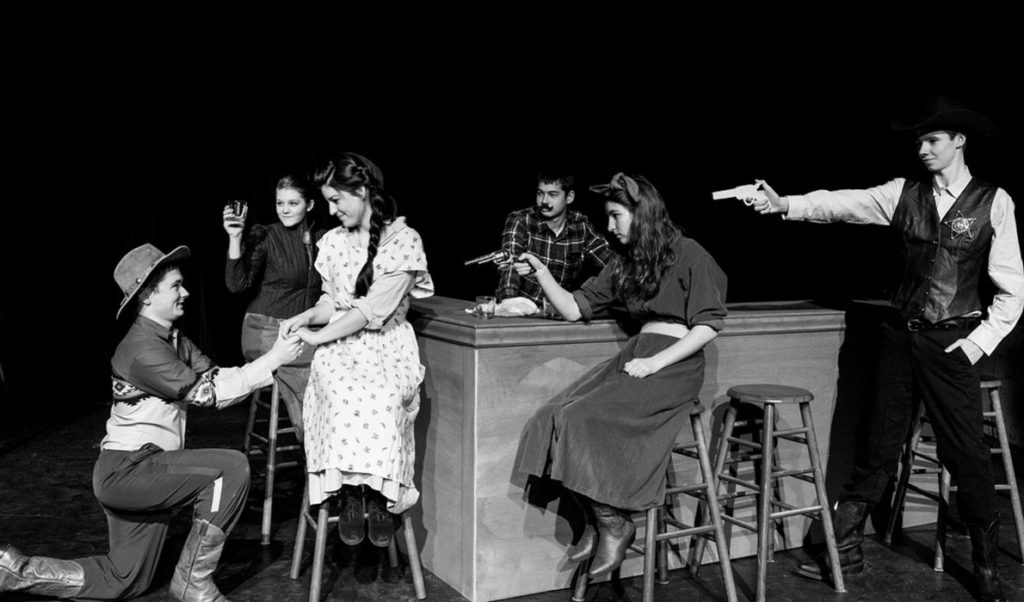