Rising sea levels and their impact on flood insurance rates are becoming a contentious and anxiety-provoking issue for Maine coastal towns. Flood maps drafted by the Federal Emergency Management Agency (FEMA) reflecting the predicted higher seas have been disputed by coastal communities in York and Cumberland counties for 16 years. And there is no resolution in sight.

Sue Baker, state coordinator for the federal flood insurance program, said it is unlikely new flood maps will be implemented in these counties in 2020. Two of the nine communities which appealed FEMA’s rejection of their maps—Old Orchard Beach and South Portland—are asking that a scientific resolution panel examine FEMA’s findings.

“We are the furthest we have ever been” from resolution, Baker said from her office in the Maine Department of Agriculture, Conservation and Forestry. “It’s a double-edged sword. The coastal communities are unhappy because flood elevation estimates (from FEMA) have gone up. For interior communities, these are the best maps they have ever had, but they are bound by older maps until the new maps become effective.”

Sens. Angus King and Susan Collins and Rep. Chellie Pingree wrote FEMA on Oct. 21 arguing the agency rejected alternate maps drafted by Ransom Environmental Consultants in Portland because of technical errors in the supporting data, but did not provide an opportunity for Ransom to address the errors. The communities should be allowed to seek revisions to the final flood insurance rate maps, they asserted, to “ensure that properties in these communities are not subject to dramatic changes in flood insurance premiums while the flood maps are being finalized.”

Baker, however, said Ransom submitted its proposed revisions in the final three days of the 90-day appeal period, which did not allow FEMA enough time to properly respond.

Scarborough Town Manager Thomas Hall said he has been dealing with the issue for ten years.

“There is huge uncertainty,” he said. “The ebb and flow of this process has been remarkable and just unbelievable to me. FEMA has a process in the Federal Register but they don’t adhere to their own processes. We have not been afforded the opportunity of any collaboration.”

Other counties, such as Knox, have used the same arguments and methodologies in questioning their flood maps and those changes were accepted by FEMA, Hall said. Scarborough, in Cumberland County, has a 3,500-acre marsh area that doesn’t fit FEMA’s traditional models for the Maine coast.

“They don’t translate well to the unique and natural phenomenon of the Scarborough Marsh,” he said. “Their model still suggests the waves will continue and go right through the marsh. We simply asked them to be receptive to different methodologies and scientific approaches to assess the risk. About 400 properties would be significantly affected and most are in the marsh area.”

The town has decided against going through the scientific resolution panel process, Hall said, since the findings are not binding on FEMA. Instead, the town will allow the new maps to go into effect and then seek a letter of map revision.

“We think our chance of success is better through that route,” Hall said.

The town of Old Orchard Beach in York County has opted to go through the scientific resolution panel process. Jeffrey Hinderliter, the town’s planning and code officer, said Old Orchard also is asking FEMA to explain why it did not follow its guidelines that allow a conversation with the towns.

“We feel that if they consulted the town, the town could have corrected their primary concerns, which would have quite possibly changed FEMA’s appeal determination,” Hinderliter said.

“About 48 percent of the town’s properties are in some way impacted by the changes,” he added, “and most of the impact would be detrimental.”

Nathan Dill, project manager engineer for Ransom, said his firm has prepared appeals for other counties and communities and filed it near the end of the appeal period without a problem.

“FEMA responded just about every time and requested additional information,” he said. “It is very rare that they fully agree and accept everything that was submitted without any question. They might question the methodology, data, say there is an error in analysis and send an official letter with a request for additional data. Then we would respond and this starts a back and forth. That didn’t happen here.”

Baker said she doubts much will come of the scientific resolution panel review.

“Even if they get a decision in their favor, there is nothing to be gained,” she said. “It is the process they are questioning, not the methodology.” 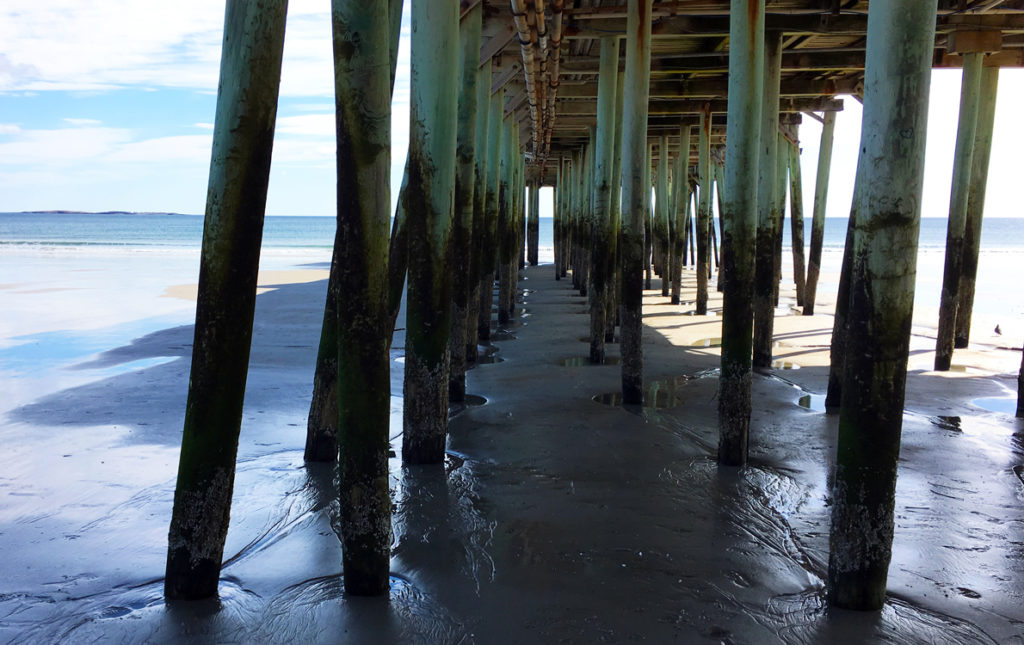 The pier at Old Orchard Beach.