A concern that we sometimes have as educators on a fairly isolated island in Penobscot Bay is how our students will react and behave when suddenly confronted with a new group of people. This could be a group of people from as nearby as Vinalhaven or Rockland—our students are sometimes without contact for months at a time, barring cross-island sports participation or family. Feeling insular can be comfortable.

It was with a little trepidation, therefore, that I anticipated the arrival of the touring musicians with Folk Arts Rajasthan. On a visit sponsored by Waterman’s Community Center, the group was comprised of five men from the Merasi, or storyteller, Indian caste.

They visited North Haven in 2008, and their saffron orange and scarlet red regalia and spirited performance were memorable. Their story is even more so: regarded as “untouchable” by other castes, their lack of rights and freedoms is reminiscent of the Jim Crow South.

On Sept. 28 the group returned; five Merasi musicians and two American women, one the founder of Folk Arts Rajasthan, disembarked the morning ferry. In orange and red turbans, vests and shirts, they were a smiling and colorful deviation from the ordinary morning scene. A colleague who met the boat reported some stares and confusion.

Their first appointment was at our middle school. Our nearly 20, fifth- through eighth-grade students packed into my classroom, initially hugging the wall opposite the musicians, who sat on a rug on the floor. As their joyful music burst forth, however, the students became enraptured by the rhythms and bounced their heads, tapped their fingers and grinned ear to ear.

The Merasi demonstrated their instruments, some thousands of years old, and Karen Lukas, the founder of Folk Arts Rajasthan, told their story. The middle school students crept forward, and at the end of the presentation, seized the opportunity to try the deceptively simple appearing flat castanets known as khartals. The ice was broken.

The connection carried over into lunch. Merasi are not permitted to eat with members of other castes, but here they shared a lunch table with me and a few students. Two members of the middle school band, a trombone player and a saxophone player, brought their instruments to the table and serenaded the Merasi with “Hot Cross Buns.”

When they finished eating their veggie burgers and spaghetti with red sauce, the Merasi returned the favor, eagerly trying the students’ band instruments and entertaining everyone in the process. It culminated in a drum set solo in the school commons. Everyone on both sides was delighted with the cultural exchange.

The Merasi presented to the elementary and high school students as well, and gave an ecstatic community concert in the evening. Two preschool students danced wildly in front of their seats. My own two-year-old daughter sat, sometimes on my lap, sometimes in the seat next to me, transfixed for the whole hour.

Although we’re sometimes short on worldliness on North Haven, I’d briefly lost faith in how long we are on hospitality. Our students, though initially shy, approached these visitors, seemingly different in every observable way, with openness and candor, ready to share their one commonality, music.

During a break, Karen intimated that the Merasi said they felt, as they approached North Haven, as though they were visiting a village in their home state of Rajasthan. Over plates of spaghetti and Turner Farm salad greens, the small worlds of both the Merasi and our students got a little bigger, more brightly colored, and a lot more musical. 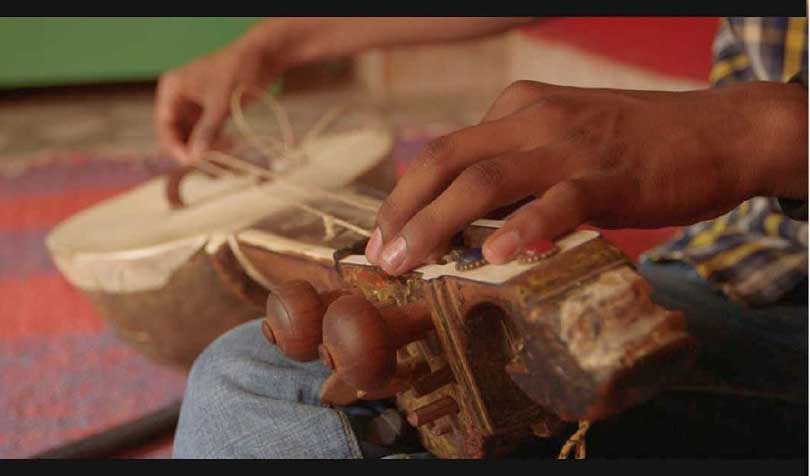