The cruise ship industry’s growing interest in visiting Maine’s harbor towns is being hailed as opportunity by some, and branded as threat by others. While communities like Bar Harbor and Rockland are debating the relative merits of this part of the tourism economy, there’s no denying its size and impact.

Sarah Flink, director of CruiseMaine, which she describes as a coalition of stakeholders advocating for Maine harbor towns in marketing for and managing cruise ship traffic, says 400,000 visit Maine via cruise ships. That’s about 2 percent of tourist visitation statewide.

Flink is working with ten Maine communities to evaluate both potential and impact. Those communities are now seeing or hope to see cruise ship traffic, and, according Flink, “The vast majority would love to see more.”
The ten communities now being evaluated are Eastport, Bar Harbor, Castine, Bucksport, Searsport, Belfast, Camden and Rockland, Boothbay Harbor, Bath, and the greater Portland area, which includes harbors from Freeport to Kennebunkport.

Though interest in growing this economic sector is strong among most, no community wants to “open the flood gates,” she explains, and instead want marketing and planning “done thoughtfully, sustainably.”

Each community has different needs and goals.

Searsport, for example, does not currently see ships visiting, and is considering how to link its public landing with the downtown. Boothbay Harbor sees a couple of ships each week in season—the smaller, American Cruise Line vessels, whose passengers prefer small towns.

“They’d be happy to see one a day,” Flink said.

Bar Harbor, on the other hand, may be hoping to see its cruise ship calls to hold steady.

Earlier this year, Eastport hosted the Norwegian line Hurtigruten’s MS Fram, with its 124 cabins. The community’s enthusiasm was unequivocal, she said, as 25 volunteers wearing blue Eastport Port Authority vests greeted passengers. Bags with local product samples were given to visitors, the library and historical society offered information about the town, and a local excursion boat moved up its start date to accommodate the visitors.

“It was almost like they had a private town to go to,” Flink said of the passengers.

Eastport has a lot of potential to market itself to more visits, she added, especially given the proximity to Campobello Island and the Franklin Roosevelt house.

CruiseMaine had been solely focused on marketing, but Flink now plans to offer workshops for communities seeking ways to manage cruise ship visits. One way to give port towns more control is for them to draft what is known as a tariff, a document that lists fees, security measures, trash and waste removal, and logistics for anchoring and shuttling passengers to shore.

CruiseMaine’s work comes through a contract from the Maine Office of Tourism and state Department of Transportation with the firm Soli DG. Soli DG is a Portland-based firm founded and owned by Patrick Arnold which focuses on economic development, “most of which connects to the waterfront,” Flink said.

Soli DG does marketing and operational work “driving 21st century waterfront economic development while integrating those cultural elements that make this a great place to live,” she said.

CruiseMaine had been under the auspices of the Maine Port Authority, but its work is now overseen by both the Maine Office of Tourism and DOT.

Eight percent of cruise ship passengers hail from New England, Flink said. A survey of those visiting New England ports found that the median age was 55-plus, had household incomes of $90,000-plus, had at least a four-year college degree, and had traveled extensively. 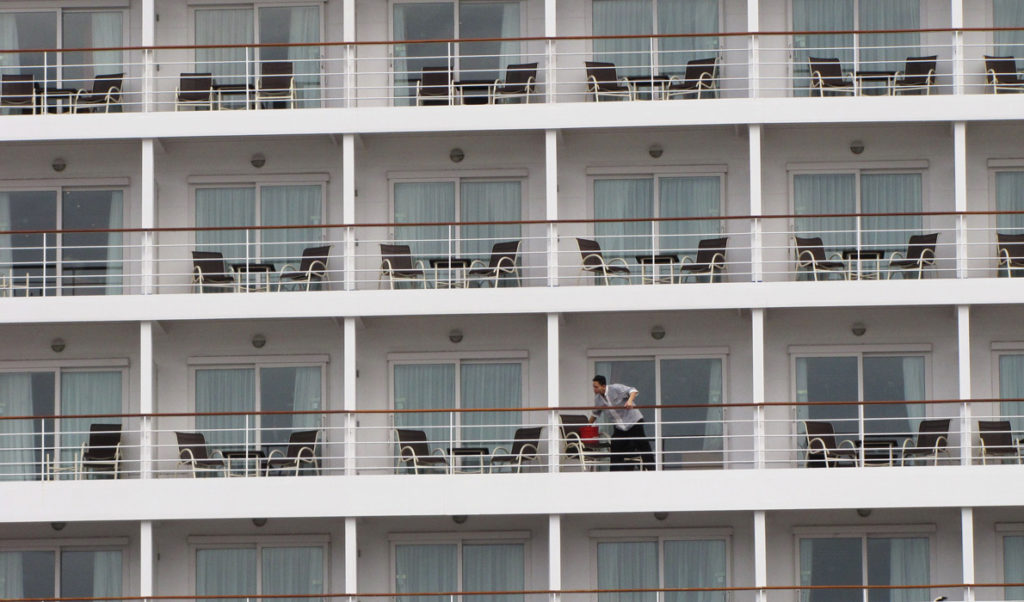 A crew member cleans balconies on a cruise ship docked at Portland’s Ocean Gateway in 2014.