The global, seven-seas cruise ship industry has run aground.

The curious role cruise ships have played as global infection vectors for the COVID-19 pandemic has resuscitated the pejorative description of cruise ships as “floating Petri dishes” for disease incubation.

“I think we’ve reached the point where we recognize that everything out there is a floating Petri dish,” Chris Gardner, who oversees Eastport’s Port Authority, said on April 9. “Walmart and the local grocery stores are floating Petri dishes.”

Eastport was expecting 11 landings in 2020 involving small cruise ships with hundreds—not thousands—of passengers and crew, a revenue source it has been cultivating for years.

Just months ago, Bar Harbor’s tourism cheerleaders were crowing about having scheduled 198 cruise ship visits in 2020. Bar Harbor’s anticipated landings were twice the number Portland was projecting for its upcoming tourist season. That’s all changed and continues to change as public health events unfold worldwide, day by day, hour by hour. Bar Harbor recently banned cruise ship visits through June, as have Canadian ports of call.

As of April 9, this was the official stance of Maine’s Department of Economic and Community Development, which oversees the Maine Office of Tourism and its CruiseMaine marketing efforts: “The primary concern of CruiseMaine and all its member ports is for the health and safety of residents and visitors to our port communities. As it stands right now, there are no ships scheduled in any Maine ports until mid-May, and the town of Bar Harbor has suspended any cruise visitation through the end of June.”

CruiseMaine canceled its long-planned, three-day Cruise Canada New England symposium scheduled for Portland in early June. It’s been rescheduled for next year. CruiseMaine Executive Director Sarah Flink says the day-to-day reality of her job has proven to be a “tsunami of change.”

Anyone who tries to find lunch in Bar Harbor any day between July and October likely regrets it. Over those four months, well over 100 cruise ships are in port. Think 200,000-plus passengers and crew flooding the town center’s restaurants, shops, and parks during those four months. Bar Harbor’s downtown merchants, restauranteurs, and gallery owners love it. Year-round residents (population: 5,400), not so much.

“On any cruise ship day, you are not getting six feet of separation from anyone,” says Jill Goldthwait, a Bar Harbor city councilor and a retired registered nurse who honed her health care skills and insights over 25 years at Bar Harbor’s community hospital. “The minute you lift restrictions, it will create a surge. When that happens, we cannot do social distancing. There’s not a foot between people, much less six feet.”

Bar Harbor is awaiting guidance from Augusta, specifically the Governor’s Task Force on Corona Virus, Goldthwait said. “I’m immersed in this, and I’m seeing increasing pressure from those worried about the community and those who are scared to death.”

The Mount Desert Island Hospital is a mile from the Bar Harbor waterfront. It has 25 beds, three intensive care beds, and at last count five ventilators. The next nearest hospital is the 64-bed Northern Light Maine Coast Hospital in Ellsworth, 20 miles down the road.

“While Bar Harbor has asked the opinion of our infectious disease specialist, MDI Hospital is not offering cruise ship advice,” said Oka Hutchins, the hospital’s spokesperson.

While the Eastport Port Authority may not see as many as 11 small cruise ships as planned for this year, there is a Plan B.

“We’re following the direction of the Coast Guard and taking a wait-and-see approach,” Chris Gardner, who runs Eastport’s Port Authority, said. “Our cruise ship schedule is bifurcated. In May we see a few early ships, but most come after the Fourth of July. Those ships have not cancelled.”

Not yet. Gardner said Plan B may be a response to there being little to no cruise ship traffic in Eastport this year. Think of it as “long term parking.”

“Whatever happens, Eastport is still trying to be helpful to the (small) cruise industry,” he said. “We have the footage (two deep-water piers, 1,700 feet of footage). If they have ships that need to lay up for a while, we have the deep-water footage, and it would put our infrastructure back to work.”

Given what little cargo now goes in and out of Eastport, Gardner thinks the strategy of parking mothballed cruise ships would be only a small inconvenience and a revenue generator.

“They might have to move off once or twice a month to accommodate cargo shipments,” he said.

The New York Times’ Lisa Collins recently reported on the extent to which cruise ships pollute the ports where they dock. To wit: “A single cruise ship docked one day can emit as much diesel exhaust as 34,400 idling tractor-trailers, according to an independent analysis verified by the Environmental Protection Agency.”

One solution seems to be “plug ins” that allow even the largest cruise ship to use shore power instead of their own onboard generators. New York City spent $21 million to build a plug-in station. The problem is ships are not required to use the system, and most don’t. The use of plug-ins is required in California, Seattle, and a few other U.S. cruise ship destinations and in other international, including London, Sydney and some ports in China.

How much pollution are Maine’s ports of call being exposed to? Who knows, given that the fuel oil used in cruise ships contains an abundance of heavy metals. The marine fuel burned contains vanadium, a toxic metal that can cause lung damage. It was concentrations of vanadium discovered near cruise ship terminals at Brooklyn and Manhattan that prompted the $21 million effort by New York to address the issue. 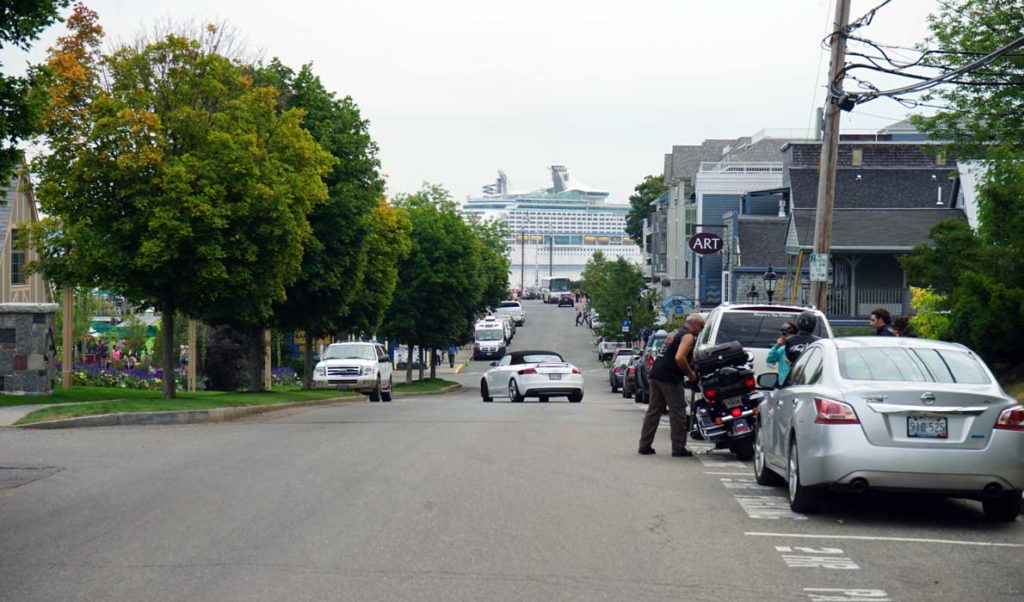 A cruise ship looms over a view of West Street