Thirty years ago, any cruise ship visiting Maine made headlines in newspapers and prompted live remote shots by TV stations. Then, for towns like Bar Harbor and Portland, cruise ships became a routine and anticipated part of the tourism season.

It’s been a boon to these coastal towns, as passengers eager to soak up the authentic and colorful nature of Maine stroll about and buy art and crafts, maybe a lobster roll, and, often, check out a bed-and-breakfast or hotel for a planned return trip. Less than 24 hours later, they’re gone.

But cruise ships have their impact.

Along with keeping harbormasters and dock attendants hopping, cruise ships sometimes rely on local services to handle trash and even septic holding tanks. But what we don’t expect—nor should we tolerate—is cruise ships breaking the law by intentionally dumping oil-fouled water along our coast.

And that’s just what a ship from the Princess Cruise Lines Ltd., owned by Carnival Corporation, did between 2005 to 2013. Details about where and when are not available, but as Craig Idlebrook’s story in this issue reports, the offending ship regularly visited Maine.

The company will pay a $40 million fine and eight of its ships will be monitored over the next five years to ensure compliance.

There is no indication that other companies have done anything of this nature, but in the early 2000s, the state legislature considered stricter rules on the discharge of wastewater within the three-mile state waters limit.

The industry balked, and veiled threats were made about no longer visiting Maine ports. But in 2006 the state enacted a revised version, described at the time as the highest standard among U.S. coastal states.

Cruise ships dumping “sewage and gray water within three miles of the state’s coast will have to meet the same standards as land-based municipal wastewater systems,” the Portland Press Herald wrote at the time. “The cruise ship industry is not complaining… According to the International Council of Cruise Lines, more than 90 percent of ships operating in America’s waters voluntarily refrain from dumping wastewater near shore already. The discharge rules will not place a significant burden on them, they said.”

The cruise ship business is more than a cherry on top of the tourism sundae. In 2016, 378 visits to Maine ports were scheduled bringing an estimated 283,000 passengers to our towns. The most recent economic impact study, for 2013, showed the industry responsible for $45 million in direct spending in Maine.

But just as our police officers don’t look the other way when tourists drive under the influence, Maine and U.S. regulators must firmly and consistently enforce our environmental laws for this important economic sector. 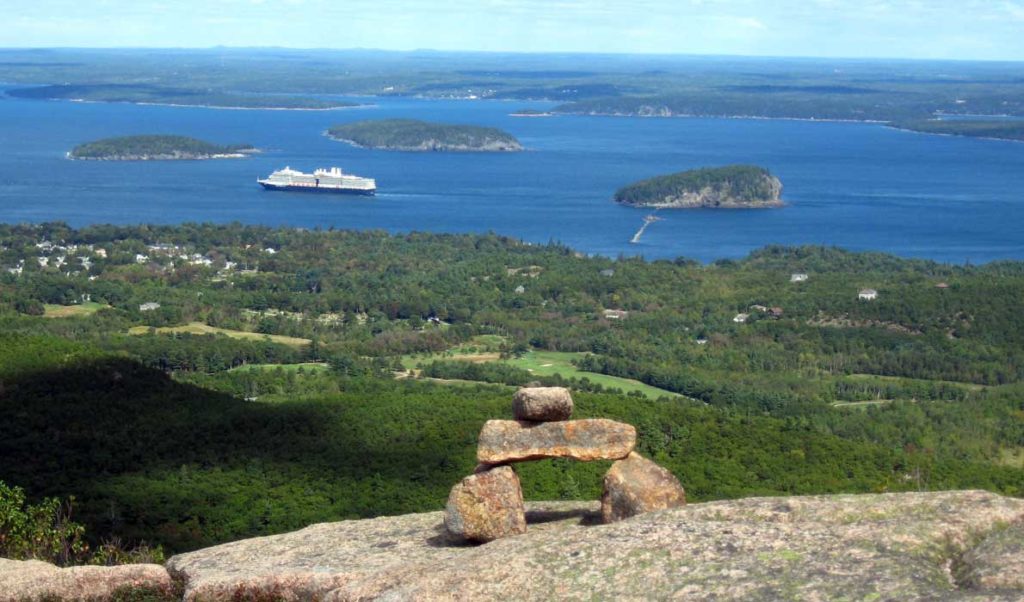 A cruise ship seen from the North Ridge Trail on Cadillac Mountain.