The Cranberry Isles learned this month it has won a $1.3 million USDA grant to pay for the construction of its broadband network. The work is complete on Islesford (Little Cranberry Island), one of three islands in the five-island Hancock municipality that will have access to the network.

At a town meeting in March 2017, Cranberry Isles voters overwhelmingly supported securing a bond to fund construction of the fiber-based broadband network, but a town committee leading the charge was hopeful it would land a grant from the U.S. Department of Agriculture’s Rural Development Community Connect program to cover most of the cost.

Earlier this year, the town learned it had not won the grant. But after more money became available this month, the Cranberry Isles learned that it had secured the funding, which will cover most of the cost of the project on Islesford and Great Cranberry Island, as well as for seasonal homes on Sutton Island.

The town had contracted with Axiom Technologies of Machias to build the network. Access is now available to all Islesford’s year-round residents. Work on on Great Cranberry and Sutton islands is expected to be complete by mid-June.

The download and upload speeds of 100 megabits per second (mbps) not only greatly exceeds what islanders had before the upgrade, but this level of service is unprecedented in most of the state.

“The Cranberry Isles will now have the same quality internet as New York City,” Mark Ouellette of Axiom said.

Along with the entertainment options it offers with Netflix and other streaming services, the many self-employed people living on islands and in rural towns rely on the service to communicate with customers and colleagues. Summer residents are more likely to stay on an island an extra week or more if they can telecommute to their jobs, thereby making more contributions to the local economy.

At a March 26 press conference in Belfast hosted by the Island Institute (publisher of The Working Waterfront), community development officer Briana Warner said islands and coastal towns have lagged behind others in the bid to stay connected. By some measures, Maine is 49th among the 50 states in internet speeds, she said.

Warner gave two examples of how slow internet speeds hamper economic activity—an island artist who must travel to the mainland to upload high-resolution photos of her work, and an island brewery that can’t process credit-card sales.

She also cited those year-round islanders who telecommute to off-island jobs, the increasing use of telemedicine for islanders—video conferencing with mainland doctors and addiction and other counseling services—and educational opportunities provided by high-speed internet.

Recalling then-Gov. Angus King’s initiative to provide Maine school children with laptops in the 1990s, Warner said the lack of broadband was like “giving our kids virtual typewriters.”

The Institute is working with 38 coastal and island communities seeking to get broadband internet.

Malcolm Fernald, a Cranberry Isles selectman and a member of the town’s broadband committee, said for the past decade, internet on Islesford “was better than dial-up, but not much.” A private residence that served as a tower to link to the mainland had been put on the market, and the seller wanted to remove the equipment, which hastened the town’s bid to find an alternative.

“By June or July, everyone who wants (broadband) will get it,” he said.

Ingrid Gaither of Great Cranberry Island, who works at the school, library, and general store, said the image of high school students in their pajamas and slippers, “sitting cross-legged in the backyard” of the library where they could get better service to do their homework, spoke of the importance of the initiative.

Building support for approving the bond—which is no longer needed, after the grant was won—meant “a lot of conversations on the street, a lot of conversations over coffee,” she recalled.
Gaither also noted that her brother, while visiting the island, was able to continue working, and that others might relocate there if the internet speeds are sufficient.

Fernald, in answering a question during the press conference, encouraged other communities to pursue build their own broadband networks.
“It doesn’t take expertise at the start,” he said. “You learn as you do it.”

“I know it’s hard. I know it’s a tremendous amount of work,” he said, but supporting community leaders in these efforts pays off, and serves as an example to others.

“Islands will remain at the forefront of sustainability,” he said. 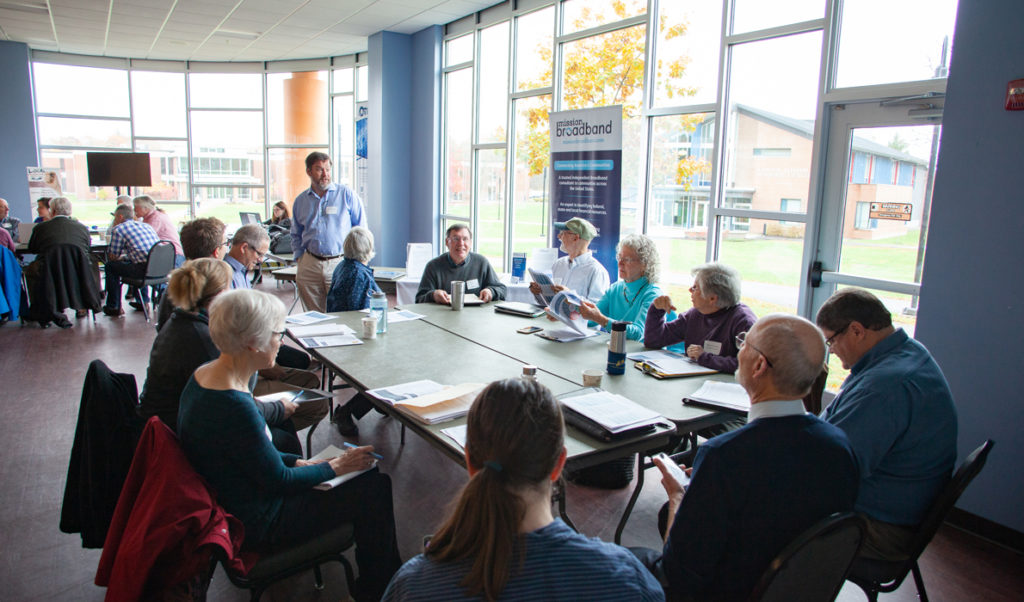 The Island Institute's press conference on the Cranberry Isles getting a USDA grant.