It wasn’t interest in the workings of local government that drew nearly a hundred Chebeague islanders to a select board meeting. It was interest in the newest island inhabitant, the non-native Eastern coyote

The meeting featured a presentation by Scott Lindsay, regional wildlife biologist for the Maine Department of Inland Fisheries and Wildlife. Comments from residents ranged from expressions of mild interest to fear.

While coyotes are known swimmers, some islanders believe the coyotes came to the island on the ice during a frigid spell in either January 2014 or January 2015. The average low temperature for a two-week period both years was about 2 degrees Fahrenheit and created an ice bridge over parts of Casco Bay. Resident Dustin Vining provided the first proof that at least one coyote was on the island when he posted a game camera video on Facebook on Jan. 21, 2015.

The introduction of a predator at the top of the food chain has had impact on this geographically isolated island community.

Occasionally, folks heard the howling of the coyotes deep in the woods at night. Over time, the coyotes came closer and were caught on cameras outside chicken houses and animal pens. Then cats started to disappear, at least five in August alone.

That same month, a dog had been killed. The next day, Chebeague.org posted a message from Ann and John Thaxter: “Our beloved dog Vannah, was attacked and killed by wild animals early Sunday morning only yards from our home. Please keep your animals safe and sound and know where they are at all times. We learned this too late.”

The select board requested that Stratton set up a workshop with Lindsay, whose presentation prompted more than 30 people to ask questions or share information. While Lindsay downplayed the possibility of interaction of coyotes with humans, he did advise people to carry pepper spray if they took their animals out at night or spent time in the woods.

The warning prompted Jane Frizzell to change her view from thinking “Coyotes don’t mess with humans,” she said. “Now I am concerned and I want them gone. I think that is why people are here.” Her comment drew applause.

Lindsay described methods of coyote control, such as hunting and trapping. Sharpshooters are effective culling coyotes by focusing on deer wintering areas, and trapping could be effective combined with local knowledge, although total eradication could be difficult, he noted.

Lindsay said a decrease in the fur market in the United States has caused the price of coyote pelts to drop. Today, the primary pelt market is in Canada.

The select board followed up on the matter at its Sept. 25 meeting, and considered researching the cost of hiring a trapper or a sharpshooter. But some board members questioned whether wildlife management was a town responsibility.

The board ultimately voted to direct Stratton to research the costs of hiring a sharpshooter or trapper to control the coyote population, but board chairman Herb Maine, who voted for the motion, said he didn’t believe wildlife management was the town’s responsibility.

“We live in a rural area,” he said. “Wild animals live here.”

On Oct. 3, a parent spotted two coyotes near the baseball field, within sight of the Chebeague Island School. The school emailed parents, urging them to “be aware of the recent sighting when considering having your child walk or bike to school in the future.”

Discussion of the coyote issue by town officials is expected to continue.

Donna Miller Damon is a member of the Chebeague Select Board, but she notes that reporting on the issue is meant to inform a wider audience of the matter, and does not represent the official position of the town. 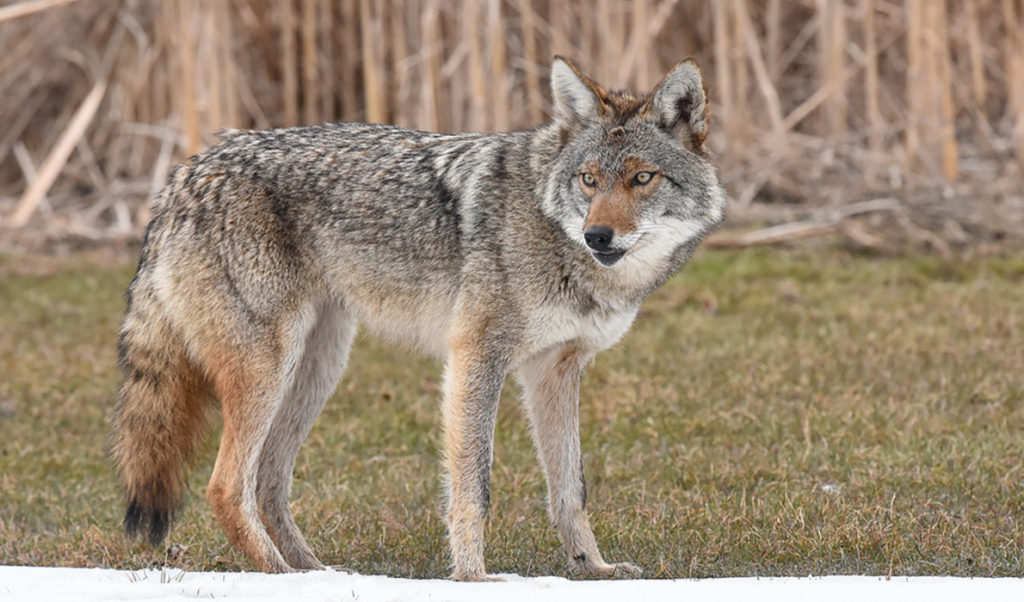