Young, soft-shelled green crabs are harvested in Venice soon after shedding their hard, outer shell. The creatures are dipped in milk or egg, floured, and fried in boiling oil, then served in groups of six or eight for about $25 U.S. in upscale Venetian restaurants. They’re also sold in fish markets for consumption in private homes, and are considered a delicacy.

Green crabs (carcinus maenas) are an invasive species in the U.S. which have contributed to the decline not only of soft-shell clams but also eelgrass. They compete with native Maine crabs and possibly lobsters. Attempts to mitigate the harmful effects of green crabs have included bounty programs rewarding fishermen by the weight of the green crabs removed from the water and fencing projects designed to protect the vulnerable soft-shell clam population. More recently, researchers like McMahan and crew have begun investigating the possibility that invasive green crabs overtaking Maine waters could be used for profitable culinary purposes.

McMahan, of Phippsburg, comes from a long line of fishermen. She grew up in Georgetown and spent much of her life working on lobster boats. She’s currently finishing her PhD in marine science at Northeastern University. Her green crab work began last year after her friend Jonathan Taggart told her about soft-shell green crabs he’d eaten while on a business trip in Venice. 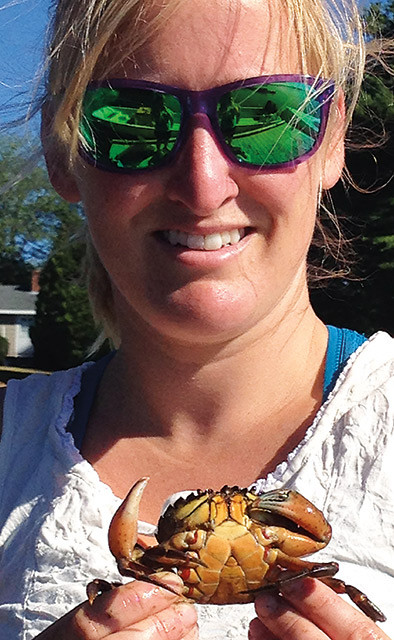 Marissa Mcmahon with a green crab.

“We began to do some research, and realized it might be possible to create a similar fishery in Maine,” said McMahan. “We relied heavily on work that had already been done by Dr. Sophie St-Hilaire and Dr. Luke Poirier at the University of PEI. They have been working on soft-shell  green crabs for several years.”

Last spring, McMahan applied for funding from Maine Sea Grant to monitor pre-molt crab populations. Then Taggart returned to Venice to study techniques used by Venetian crabbers. One of those crabbers, Paolo Tagliapietra, became so interested in the Maine project that he traveled to the state last August. He spent two weeks teaching a group of  lobstermen the tricks of the trade, hoping to preserve this centuries-old Italian tradition which is beginning to fade in Italy.

In the meantime, McMahan said that she and her colleagues began collaborating with Massachusetts journalist and environmental activist Roger Warner who was researching the culinary potential of green crabs. He was featured in the Boston Globe for green crab stock that he developed. Warner, Taggart, McMahan, and PEI researchers combined forces last fall to form the Green Crab R&D Project (greencrab.org).

More recently, McMahan said they’ve been joined by numerous volunteer fishermen and citizen scientists, including researchers at New Hampshire Sea Grant, the Massachusetts-based science nonprofit Manomet, food bloggers, and Red’s Best Seafood in Boston. McMahan plans to transition from her PhD program at Northeastern to employment as a scientist at Manomet this fall, where she will continue to work on developing a soft-shell green crab industry.

The entire fishery is dependent upon the ability to detect when the crab is about to molt. McMahan and Jamison spent two weeks earlier this year in Venice sorting thousands of pounds of green crabs to learn how to identify pre-molting crabs.

“We sorted through roughly 800 pounds of green crabs each day, gaining an immense amount of experience,” said McMahan. “The Venetians were producing about 50 pounds of soft-shell crab per day when we were there.”

McMahan and colleagues have been trapping green crabs in Georgetown since June, attempting to determine local abundance, distribution, and molting patterns. They’ve also started trapping at the mouth of the Kennebec River.

“We have found that green crab populations differ drastically, even across distances spanning less than a mile,” McMahan reported in a Maine Sea Grant blog.  “Most importantly, we harvested, cooked, and ate a small  batch of soft-shell crabs in late June, and they were delicious! Tender and juicy on the inside, crunchy on the outside… It’s no wonder this is considered a delicacy!” 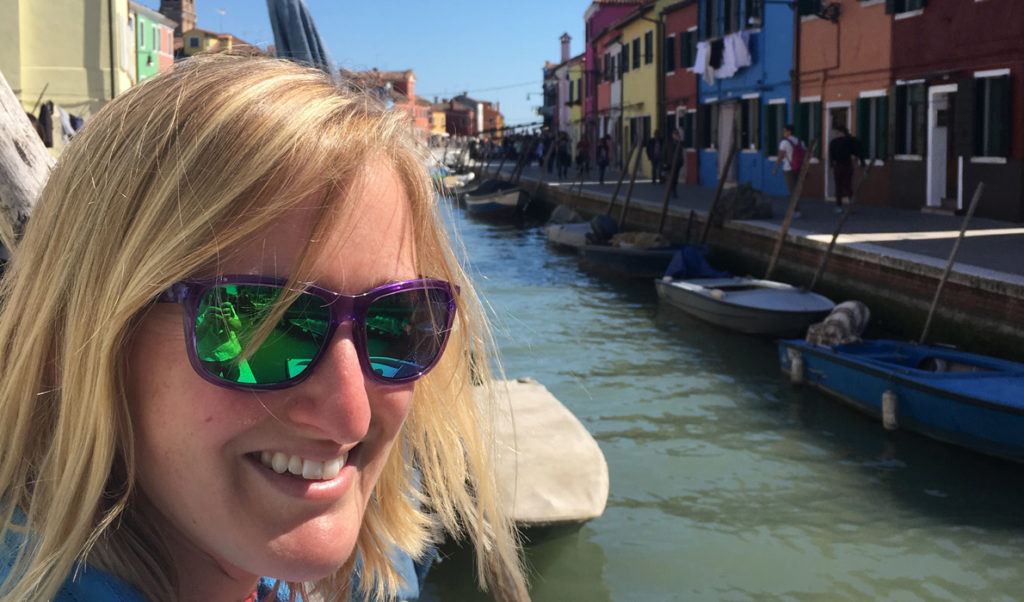