Given the talk on the wharves all year, it was no surprise to hear the official 2017 numbers on Maine’s lobster fishery—110.8 million pounds with a value of $433.8 million, down nearly 22 million pounds from 2016.

With this large one-year decrease, the first drop in value since 2009, there was a lot of interest at the annual Maine Fishermen’s Forum, March 2-4, about whether this is the beginning of a predicted downturn.

Maine Department of Marine Resources presented the 2017 results of the four monitoring programs it operates to keep tabs on lobsters. These long-term surveys seem to be telling a contradictory story. The settlement survey continues to show below-average numbers of young of year. The other three surveys that look at larger life stages show similar trends over time from 2001-2017—an increasing number of sublegal lobsters. Provided these undersized lobsters survive, this should be good news for the fishery. The mystery is what is going on with the settlement survey and the smallest lobsters?

Here are the details:

The diver-based “Settlement Survey,” for the fourth year in a row, was below the long-term average. This survey tracks “young-of-year” lobsters, or those lobsters that have recently hatched and settled to the sea floor.

Three DMR surveys collect data on sublegal and larger lobsters. The “Sea Sampling” survey showed the sublegal lobster catch was up in all zones, except Zone F (Casco Bay area). The “Ventless Trap” survey showed sublegals in 2017 were down slightly compared to 2016, but 2016 and 2012 (both very warm years) were the highest years on record. In all zones, sublegal catch in ventless traps in deeper waters is increasing in recent years. Finally, the “Trawl Survey” has also shown an increasing trend of sublegal lobsters.

So, in a time of high landings and presumably unprecedented broodstock, why are there years of below average settlement? Furthermore, if there are truly fewer “baby” lobsters out there, where are all the juveniles coming from that are showing up in the other surveys?

To answer these questions, a new research initiative is underway. For the last two seasons, the University of Maine has partnered with the industry to determine if the nursery habitat for settling lobsters has expanded to deeper waters as the ocean warms. Since settling lobster are looking for seafloor temps above 53 degrees F, they may have an expanded area to settle. Thus, if the surveys are only occurring in shallow depths that divers can survey, we may be missing the youngsters that are settling offshore.

These deep water settlement surveys, conducted out of Casco Bay and Cutler with collectors deployed from a boat, rather than SCUBA, have found young-of-year lobsters at greater depths, albeit in small numbers. But, if you account for the expanded settlement area, the settlement index forecast for future lobster landings is more optimistic, though still declining. With only two seasons of data, this survey is in its infancy, but Ready Seafood has committed to continuing deep water monitoring to shed more light on the topic of offshore settlement.

In other lobster-related news, UMaine scientists reported encouraging findings about the survival prospects of discarded cod and cusk from lobster traps.

Perhaps the most discouraging report from the forum is the status of the endangered right whale and the potential implications for the lobster fishery. Over the past couple of years, births have gone down and mortality rates have gone up, with 17 deaths along the East Coast of the U.S. (5) and Canada (12) in 2017, some from entanglement in fishing line. Because the Maine lobster fishery has a lot of fixed gear in the water, the Atlantic Large Whale Take Reduction Team has established two subgroups to investigate reduced strength rope and ropeless fishing for the fishery.

And finally, for those tiring of scientist predictions of future conditions, fishermen from Point Judith, R.I. shared their own forecast for the future fisheries in the Gulf of Maine—black sea bass and Jonah crabs. “Get ready, they are coming!” was the word.

One thing we know for sure is that conservation measures adopted decades ago have given the Maine lobster fishery a leg up in the face of an uncertain future. Those tough regulations, enacted for the good of the fishery in the past, hopefully remain alive and well! 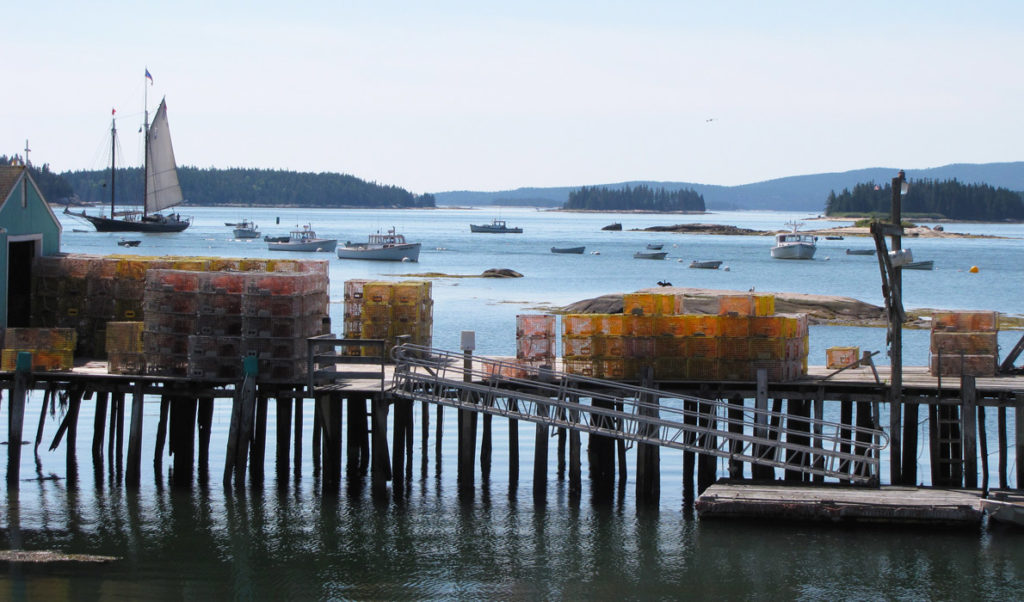 Traps stacked on a pier in Stonington.