One of the best metaphors depicting the fragility of island communities I’ve encountered is the idea of the three-legged stool.

I attend the quarterly meetings of the Maine Islands Coalition, a group the Institute helped create, which convenes representatives of the 15 unbridged, year-round islands. Occasionally, members refer to the idea that there are three—well, at least three—pillars that keep an island community vital.

Those three legs are a school, a store, and on-island jobs.

Some of our island schools have as few as three students. It’s hard to justify hiring a teacher to work with such a small student body, but if the school closes, families with children will leave or not settle on islands, dooming them to become home to older folks.

The store as a necessity to a community might surprise some. I’ve learned that many savvy islanders have purchased Amazon Prime, which provides free shipping, so they can then use Amazon Pantry, a food service, to buy nonperishable groceries. Still, the store, as a place to grab a gallon of milk, loaf of bread, beer, and maybe a fresh-made sandwich and a cup of coffee, has an important role to play.

Islanders also note that small general stores can play a part in island society. Information is shared when people bump into each other. Business deals are made in such stores. Word is shared about the neighbor who needs a helping hand. A decision town officials made the night before is discussed, perhaps leading to push-back or support.

The need for jobs, of course, is obvious. Islands dominated by retirees and summer residents can be wobbly communities without this leg. Retirees and summer residents certainly create economic activity in the services they seek—home repair and maintenance, boat repair and maintenance and storage, landscaping, and even catering, but those year-round jobs that can sustain young families are so important.

I would add a few more legs to our imaginary stool.

Tradespeople who live on-island are critical. Waiting weeks for an electrician or plumber to arrive from the mainland can transform that idyllic island home into a hellacious hovel.

In interviewing the couple who are helping develop a childcare facility in Castine, I came to realize that such a service is just as important—maybe even more important—to a community as a school. Parents of young children can’t get and keep jobs if there’s no place for those children to be safe and engaged.

The Institute is working to help islands and coastal towns bring high-speed internet to residents, which has become another essential leg. With broadband internet, people can work as well from a home office on an island as they can from an office in Boston. Summer residents can stay an extra week, commuting back to their work via the web, and thereby create more economic activity. (See Barbara Fernald’s Cranberry Report.)

I also would add a library to our list, especially one that is actively engaging the community with speakers, films, and art exhibits, and affordable rental housing.

Few communities have all these elements, but we would do well to take stock of them from time to time. 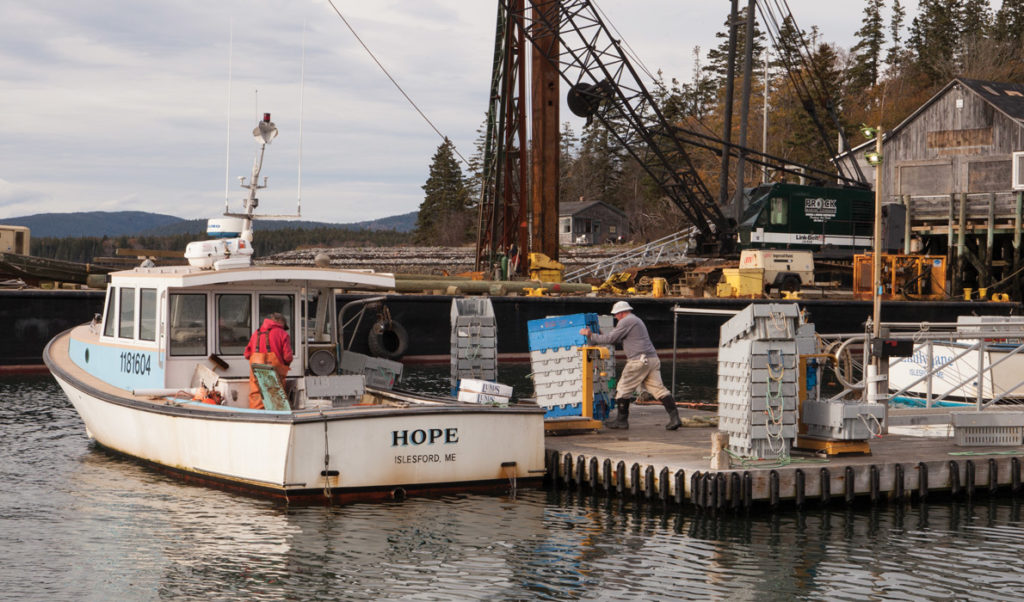 Fishermen work on the waterfront on Islesford as November settles in.