One of the things I love about October and November in the Cranberry Isles is the increase in bird stories. It is migrating season and most people out here keep an eye on the birds with many a good story to tell. This fall, especially, my mind has craved the neutral balm of bird news. We could all stand to rest our wits for a few minutes from the constant barrage of politics and devastation.

For me, watching or hearing about birds will restore my spiritual sense of place every time. Even if just for a minute, I can stop whatever thoughts are whirling in my head, smile, and feel a moment of peace. It won’t do anything to restore electricity or water, it won’t raise money, and it won’t solve the problem of gun violence, but watching birds or hearing about them can provide a moment of rest for any weary brain.
In the first few days after 9/11, I watched dozens of chickadees traveling to and from the feeder, taking one seed at a time, flying to their favorite spot to crack and eat it, then returning to the feeder for the next seed. The rhythm of their swooping wing-flutter, accompanied by the nasal laugh of the nuthatches, provided the score for a scene I could watch whenever I managed to turn away from the horror on TV. Proof, outside my window, that there was something still OK in the world.
Most days when my husband Bruce comes home from fishing I’ll ask, “How was your day? How was the catch? Any bird stories?” On a particularly rainy day offshore, a yellow warbler arrived on his boat looking wet and bedraggled. He told me, “He hopped right up in the cabin and perched on a piece of Tupperware where I keep my paperwork. It was right in line with one of the vents from my heater. He stood in that hot air like he was drying himself with a blow dryer, his feathers puffing up and fluttering. It was a raw wet nasty day and the heater felt good to me and the bird!”
During a warm day at the beginning of October, I was at the beach with my sister-in-law, Karen. I asked her if she had any good fall bird stories.

“I don’t know if you can use this or not, but I always think about it at this time of year. In the early 1960s, our friend John used to raise pheasant chicks and then let them go for bird hunting season. One day one of my brothers was out hunting and he saw a pheasant behind Miss Anderson’s house. He shot it, went to retrieve it, and out came Miss Anderson to ask him what he was doing. She had just been on the back porch throwing cracked corn to the wild pheasants!”
I returned from the beach to find Bruce in the kitchen looking through the National Geographic Field Guide to the Birds of North America.

“Those must have been Northern Fulmars that we saw today. One was a light morph and one was a dark morph. They dive and swim underwater just like a shearwater. There were also about 100 gannets out there diving right near the boat.” A description of gannets from All About Birds, the Cornell Lab of Ornithology website indicates how cool it would be to watch these birds in action:
“Breeding in only a few large colonies along the North Atlantic, the Northern Gannet spends most of its life at sea. Flocks engage in spectacular bouts of plunge-diving for fish, with hundreds of birds diving into the ocean from heights of up to 40 meters (130 feet).”
If you can’t quite picture it, check out this Youtube video of diving Gannets, from the Smithsonian channel: www.youtube.com/watch?v=D8vaFl6J87s
I asked Bruce if he ever just stopped to watch them.

“Yup,” was his response.

I continued, “I mean do you really just stop everything and drift for a few minutes to just watch their activity?” He gave me the answer I was looking for: “Of course!”
I like hearing about the offshore birds I don’t get to see and, even better, I like picturing my hard-working husband taking a break from his world to watch them. 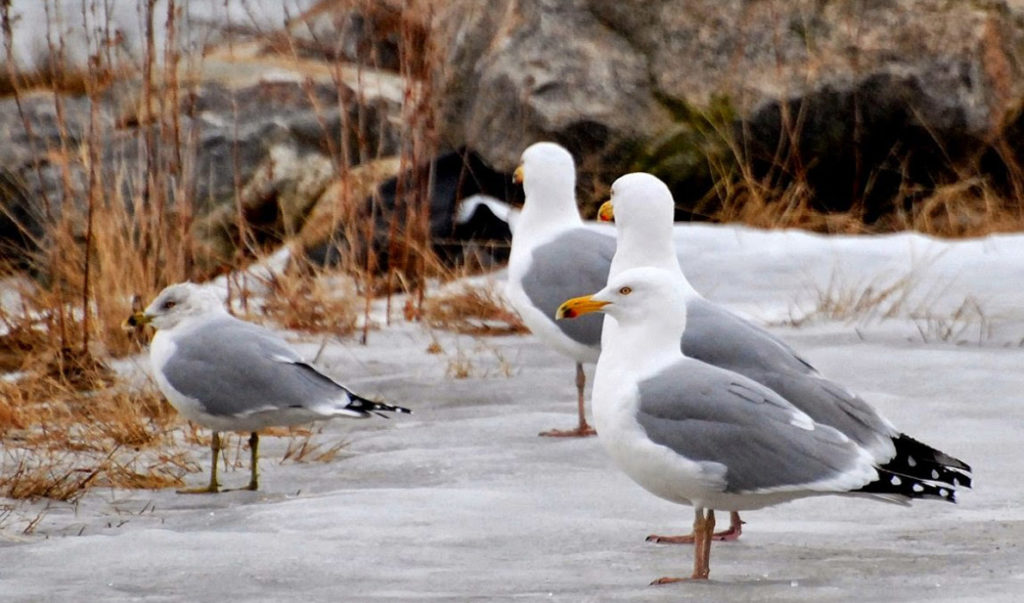