If there were any doubt about the role schools play in island life, they were set to rest by the ceremony marking the reopening of the Henry Wadsworth Longfellow Elementary School on Great Cranberry Island.

It was an emotional morning.

On Sept. 1, the first day of school, a ferryload of Islesford residents arrived at the Great Cranberry dock, including the three students from that island who will now make the boat commute part of their school routine.

Since 2000, when Longfellow closed due to lack of students, Great Cranberry students have been commuting by ferry to Islesford to attend the Ashley Bryan School.

But Longfellow has long been a deeply meaningful place for Great Cranberry residents. Built in 1904, the school opened for grades K-8 in 1905, replacing Great Cranberry’s two earlier schools. A library addition was built in 1989-1990. School enrollment was as high as 20 or 30 in those years. But by 1999, it was down to two. At one point, there was only one school-age child on Great Cranberry.

But several factors boosted Great Cranberry’s population of families with children, including the development of affordable housing and initiatives around boat service and broadband access to improve the employment prospects of new residents. At the same time, the joint Cranberry Isles School Committee won town approval for upgrades to Longfellow, ensuring it would be available in case the Cranberry Isles community wanted to open it again.

At the dock, the Islesford kids hopped into the school van and rode to Longfellow, where they were greeted by an excited group of Great Cranberry children and a growing crowd of adults, many with deep roots on the islands.

“It’s so exciting to see everybody together,” said Beverly Sanborn, whose husband and son, Norman Sanborn Sr. and Jr., attended Longfellow. Norman Sr.’s parents bought a house on Great Cranberry when he was 3, in the early 1940s. The family lived there year-round. Norman Sr., called “Big Norman,” grew up to go off-island and serve in the Navy and marry Beverly. The couple moved back to Great Cranberry in 1963. He was a lobsterman and boat captain, and the couple raised their family. Beverley became a teacher’s aide at Longfellow while her children were students there. And now her grandchildren are going.

“One of my teachers was Bob Denver’s wife, Margaret,” he said. “It was a real Gilligan’s Island. They lived out here to get away from everybody.”

Pauline “Polly” Bunker is 89 and went to Longfellow. Bunker is a much-loved resident—earlier in the summer, the community threw “Polly Bunker Day,” with a reception, fashion show, lunch and slideshow.

Was it for her birthday?

“No, just to honor Polly Bunker,” said a Polly Bunker fan standing nearby. “She’s an institution.”

Polly remembers there were a lot of kids at Longfellow when she was there.

“There were so many of us we had to be separated at recess,” she said.

Does she have anecdotes?

“She was probably one of the mischief-makers,” the Polly Bunker fan affectionately said.

“We all had good times,” Polly said. “We planned fights on Schoolhouse Hill, by the tennis court. They weren’t too bad. Not fistfights. I don’t know who won what. But we arranged it so we were the winners.”

Norman Jr.’s wife is Kelley Sanborn, who heads the school committee. She addressed the crowd.

“Seventeen years ago, the doors to Longfellow School closed for regular classes, leaving this island unsure of its future,” Kelley said. “We stand here today as a testament that we’ve not only endured as  a year-round community, but are growing to the point where we can once again open the doors to our beloved school.” 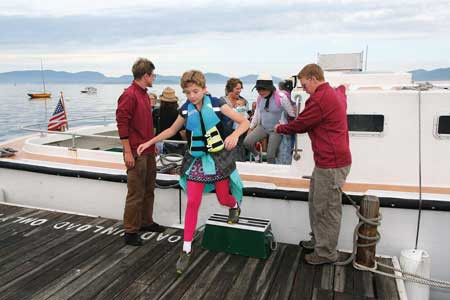 Student Adele Palmer hops off the ferry from Islesford, followed by student Rubye Alley and Principal Lindsay Eysnogle with her baby, Marina.

Historically, students on each of the two islands attended their respective schools. But since 2000, Sanborn said, it became apparent that there were educational and social benefits to having the children together.

“It is best for our town to bridge the islands through our schools and, in doing so, will strengthen our symbiotic relationship,” she said. “We are one school with two campuses—Longfellow and Ashley Bryan.”

“Without her devotion and perseverance we would not be here today,” Sanborn said of Meyers.

“I feel so strongly it’s best for the whole town,” Meyers said later. Meyers’ daughter was the one child on Great Cranberry, for quite a few years, who commuted to Islesford for school.

“I saw how much she gained by having Islesford be familiar territory and meeting the folks on  Islesford,” said Meyers. “So this is a great way to bring the whole town together. And it was important to have this be used again as a school.”

Phil Whitney, whose grandmother, Ella Bates Spurling was Longfellow’s first teacher, and whose mother, Dorothy Spurling, taught there in the mid-1930s, raised the flag. There was a trumpet rendition of the national anthem. Lead teachers Audrey Noether and Lauren  Simmons read the memories and good wishes written by residents, then rang the century-old cast-iron bell that once occupied the school’s bell tower and now has a place on the lawn.

Ashley Bryan—the children’s book author/illustrator for whom Islesford’s school is named—recited the Langston Hughes poem “My People” in call-and-response fashion.

The children lined up, youngest first, to enter the school one by one to great applause, cameras clicking.

The crowd dispersed, but Cari Alley lingered after two of her children, Rubye and Wyatt, went inside.

Longfellow’s reopening brings the Alley family full circle. Her children are great-grandchildren of Richard “Chuddy” Alley Sr., who used to go to school there, along with his siblings and half-siblings.

Chuddy married an Islesford girl and their children and grandchildren went to the Islesford school. But before he passed away in 2015, he found out Great Cranberry was getting ready to open Longfellow and his great-grandchildren would go there.

“He was super-excited,” said Cari, who is married to Cory Alley. The family was up at 5:15 a.m. on this morning so their older daughter could catch the 6:30 a.m. ferry from Islesford to the mainland high school. Then Cari got Rubye and Wyatt ready for the boat to Great Cranberry. The commuting students are always accompanied by a boat monitor who also serves as an ed tech.

Still, said Cari, “It’s a little out of our comfort zone. They’re not just going around the corner anymore. ‘Where’s your lunch pail? Where’s your lifejacket?’ But that’s good. And those uncomfortable zones is where we have the greatest adventures.”

Cory can trace his grandmother’s side all the way back to the first permanent settlers.

“It’s definitely exciting to be part of that kind of history,” Cari said. “Little Alleys, back at Longfellow School. My kids this morning said, ‘Do you think Grandpa is happy?’ I said, ‘Of course he is!’ And my daughter Rubye, who was incredibly close to him, said, ‘Grandpa has a big smile on his face.’” 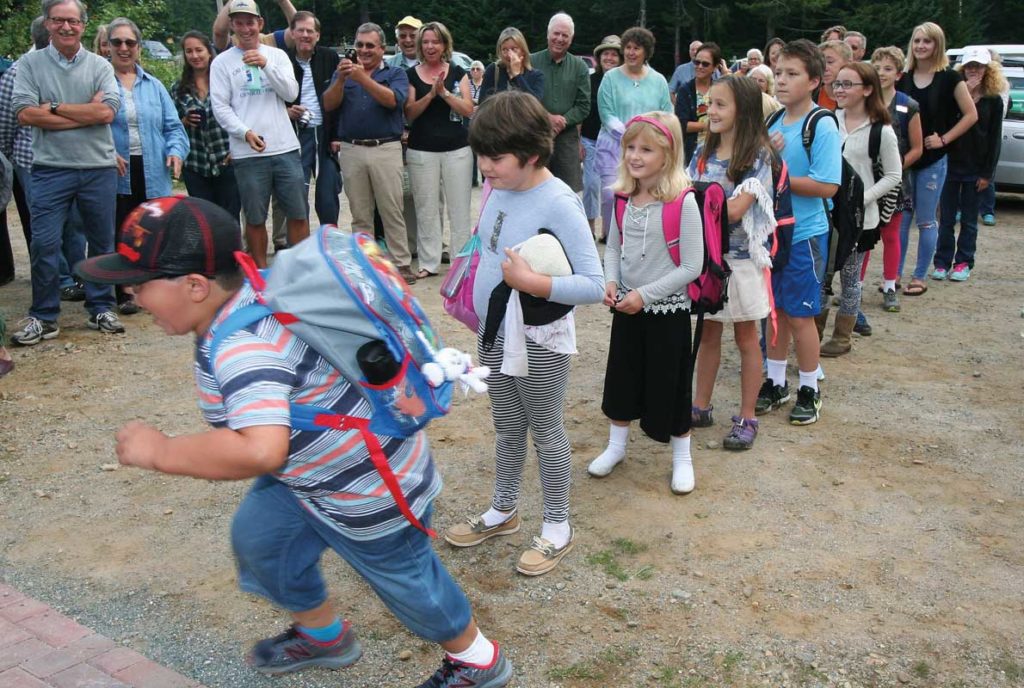 Students line up to enter the Longfellow school on Great Cranberry Island. The school reopened on Sept. 1.

Adventures with a colonoscopy