Nine years ago, a man who had no background or any interest in creating art became an artist. Not instantaneously, of course. Swimming along the bottom of Wiscasset harbor, 30 feet under water, bottle hunter Rick Carney, his Kevlar gloves digging in the muck, was hit with an idea that would lead him down an unimagined path.

“I’m digging in this mud and I’m pulling out broken high end bottles—we’re talking 300 to 500 bucks each—and everyone of ’em broken,” he remembered, speaking in his studio in Brunswick in March. “I went through probably 10 of them,” he said, “throwing them right over my shoulder—argh, argh—then I had an epiphany: why don’t I make something out of them?”

Carney, age 56, has been hunting old bottles practically all his life. He caught the bug when he was seven or eight, he says, when he first laid eyes on colorful, old bottles at a yard sale. He was instantly smitten.

Through all of his childhood into his early adulthood, Carney dug for bottles on land, doing research at local libraries to identify old trash dump sites. Thirty years ago, he left land digging and went underwater. He would locate lost objects for people and sell off the bottles and some other items he found underwater. He only kept items he found if they were whole. All the broken stuff he left behind. Until nine years ago, that is.

After heaving high-end broken bottle after high-end broken bottle over his shoulder in Wiscasset harbor nine years ago, it dawned on him that bottle collectors are always looking for go-with—that’s something that complements or “goes with” their bottle collections. If someone collects bitters bottles, Carney says, he or she might also collect advertisements for bitters bottles.

He collected the Dr. Townsend’s sarsaparilla bottles he’d been tossing away, went home and told his wife he was going to use them to make a lampshade. “My wife said to me, ‘Who’s this guy? Where did you come from?'”

Never having done any sort of art work before, Carney had to enlist the help of a friend who works in stained glass to teach him how to work with stained glass. His first lampshade merged parts of the broken sarsaparilla bottles into stained glass. It was not long before he branched out, incorporating parts of porcelain dolls, dishware, car hood ornaments, marbles and other objects into stained glass works that he has dubbed artifact art.

He worked on his art for nearly a year without telling anyone what he was doing before he finally started promoting his artifact art. Right from the start it caught on, he says. Nearly a decade later, “I can’t make it fast enough,” Carney said. “I say to my wife all the time, ‘ Who’d have ever thought it?”

“His art is so unique,” says Wayne Robbins, a Bath-based wood carver who is teaching Carney wood carving. Both men are members of Sebascodegan Artists, a Harpswell-based collective of artists.

“He has a fabulous mind for design. It’s one of those things. People who have that gift of seeing can transfer it to different art forms very easily,” Robbins said.

After almost a decade of being an artist on the side, Carney retired from his full-time job last summer, selling his copier repair business to focus full time on his art.

The ideas for new art work are always “coming, coming, coming,” Carney says. “All I have to do is reach into any of these boxes and pull out a piece.”

Carney exhibits regularly in Maine and often sells his work at a variety of festivals, including this summer at the Yarmouth Clam Festival and the Maine Lobster Festival in Rockland. Also this summer, his work will be exhibited at the Sebascodegan Artists Gallery in Harpswell, the Ironbound Gallery in Camden and Northport Landing Gallery. 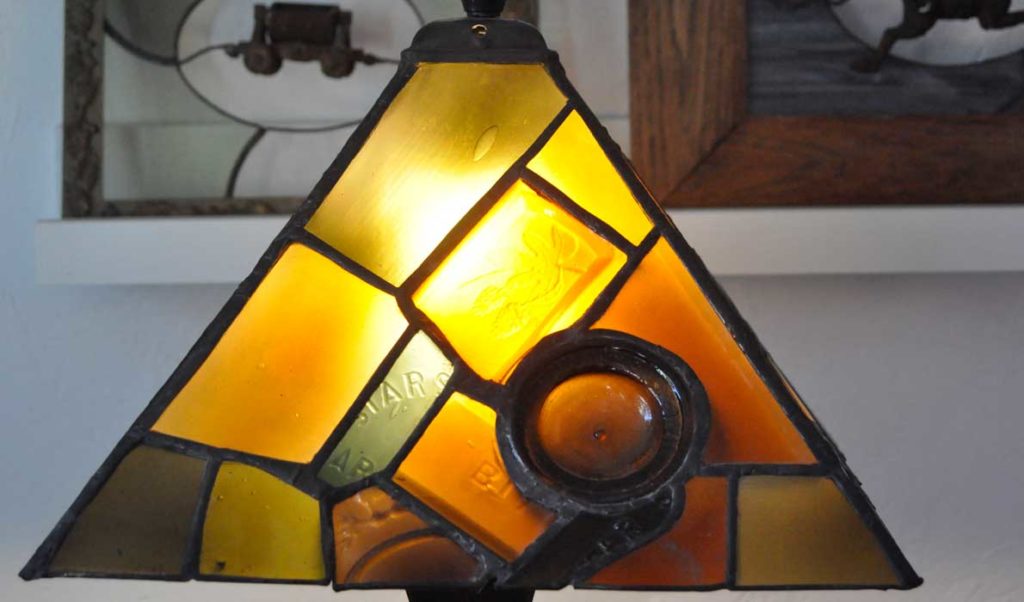