A delegation of 17 students from Bar Harbor’s College of the Atlantic is in Paris this month to participate in the latest United Nations climate summit, a two-week session expected to yield an international agreement on carbon-emission reductions with a target of keeping global warming increases at or below 2 degrees Celsius.

Earlier in November, the students were on campus planning presentations on topics such as climate justice, historical responsibility and resistance to change, as they looked forward to their Nov. 23 departure. Their main concern, they said, is about the disproportionate impacts of global warming on the world’s poor.

Aneesa Khan, born in India and raised in Oman, is a third-year Davis Scholar at College of the Atlantic (COA), where her studies have included international environmental politics, law, food and agricultural justice and trade issues. At the U.N.’s climate change conference in Lima, Peru in 2014, Khan followed negotiations on climate finance, carbon markets and other matters. This year, she’ll continue tracking policy on these issues while also engaging with the large number of climate justice activists who will attend.

“These negotiations have been happening for years now,” Khan noted. “It’s crazy that they haven’t reached a fair and equitable climate agreement. That’s the major part of the narrative that we’re trying to change this year. We’re saying that governments are not delivering the climate deal—so we don’t need them anymore. We don’t need governments to take decisions. We don’t need to look to corporations to make small changes to the way they work. Civil society and people on the ground have the solutions to climate change.”

COA delegations have attended the conventions every year since 2005, in places like Montreal, Nairobi, Bali, Copenhagen and Warsaw.

This year, the delegation is grouped in a constituency called Research and Independent Non-Governmental Organizations, or RINGOs. The students are also members of other constituencies—a youth constituency called YOUNGOS, and the environmental NGOs. Subsets of four students per week are in the official negotiating space. The rest are part of the large numbers of youth and general public participating in a broad range of activities across the city.

COA students also do a lot of local activist work on climate change. They are active with the climate change group 350.org in Maine, have gone to Portland to support efforts there to block a new pipeline/terminal, and take courses in renewable energy that have hands-on solar and wind energy projects.

The delegation’s Paris trip was facilitated by COA professor Doreen Stabinsky, who has attended the conference since 2008. She teaches courses about the science, policy and politics of climate change and prepares students for the yearly summits.

“The opportunity to participate is an amazing learning opportunity,” Stabinsky said. “It builds their confidence and gives them opportunities to develop all sorts of skills—cross-cultural communication with their peers, working with the media, collective decision-making and organizing of large groups, working as a close team with little sleep over a long period of time.”

Klever Descarpontriez—a Davis Scholar from Bolivia who focuses his studies on climate politics and attended conferences in Poland, Venezuela and Peru, said he’ll be interested to see how the 2015 agreement will look through the lenses of equity, ambition and justice.

“This is my fourth year living in the United States,” he said. “The western style of living is contributing to climate change. And we”—the general population enjoying a certain lifestyle—“are part of the problem. We can’t just sit down and cross our arms.”

Aura Silva is a Mexico City native who last spring attended UN negotiations for the Post-2015 Development Agenda in New York and expects to be both inside and outside the negotiation space this time.

The Conference of the Parties to the United Nations Framework Convention on Climate Change, called COP21 for short, is being held from Nov. 30 to Dec. 11. The framework convention—adopted in 1992 and ratified by 196 states, which constitute the “parties” to the convention—acknowledges human-induced climate change and places primary responsibility on industrialized countries to combat it.

The Conference of the Parties—the convention’s decision-making body—meets yearly to craft goals and strategies. COP21 brings together 40,000 participants, including national delegates, observers and other members of the public. For the first time, it’s expected the COP will reach a binding agreement to be implemented in 2020.

Another objective is the mobilization by developed countries of $100 billion per year, starting in 2020, to help developing countries combat climate change. Earlier this year, President Obama submitted his plan to the U.N. to cut U.S. carbon emissions by as much as 28 percent by 2025 from levels recorded in 2005. 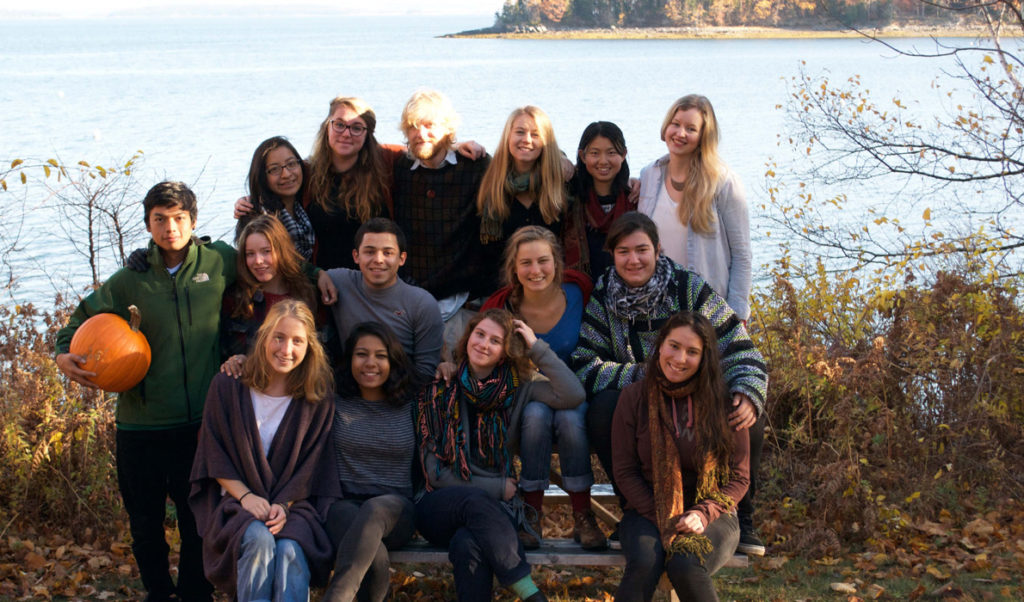 College of the Atlantic students who are part of the U.N.'s climate change negotiations.