Maine’s 5,400-mile coastline is one of its most valuable assets. It creates a living for fishermen, a powerful draw for tourists and a quality of life that is possible in few other places.

Over the past two decades, public access to the coast has been challenged in court across the state, at places like Cedar Beach, Goose Rocks and Eastport. Experts expect more of those challenges as waterfront property values soar, along with the public’s desire to access it for recreation and commercial activity.

Most of Maine’s waterfront—88 percent of the state’s island and mainland shoreline—is privately owned. And Maine has unique laws governing shoreline rights.

“I’m convinced there will be more litigation about coastal access,” says John Duff, associate professor of environmental law and policy at the University of Massachusetts.

“More people want to use the space for more activities. An increasing number of people are buying property,” Duff continues. “More members of the public are trying to get to the Maine coast because of its beauty. And those interests are in tension.”

The recently updated “Public Shoreline Access in Maine: A Citizen’s Guide to Ocean and Coastal Law,” explains the laws, and how they have been interpreted by the courts. The guide was published by Maine Sea Grant; Maine Department of Agriculture, Conservation and Forestry; and the Wells National Estuarine Research Reserve.

The guide explains that in most states, the intertidal zone—the land between the average high- and low-water marks—is publicly owned.

But in Maine, unless it is explicitly in public ownership, that area is often understood as being privately controlled. The only permitted public uses are fishing, fowling and navigation. Activities like recreation, walking and sunbathing are prohibited.

What’s more, open space along the coast can be presumed accessible by way of silence by the owner. There is presumption of permission until or unless the owner says otherwise, says Duff, lead author of the guide.

In most states, the opposite is true.

Maine also recognizes the concept of “easement by prescription.” This means that if the public has been continuously using a property for at least 20 years and treat it as such (and the use is contrary to the landowners’ wishes), the public can secure ongoing access to the property by way of a “prescriptive easement.”

These laws have been challenged in a raft of recent court disputes, which are outlined in the guide.

In 2011, the use of the intertidal zone for “fishing, fowling, and navigation” was expanded to include scuba diving.

The guide notes that the decision did nothing to clarify whether the public could use the intertidal zone for activities like windsurfing, paddle-boarding or snorkeling.

“Whenever you see a split in rationale, both sides of the argument are getting signals that they could win the next argument,” says Duff. “The flip side is that they realize they could lose. Do they want to take the gamble to push their definition?”

The concept of “easement by prescription” has also been challenged in the courts.

In 2009, waterfront property owners on Goose Rocks Beach sued the town of Kennebunkport in Almeder v. Town of Kennebunkport. The town claimed that it had a “prescriptive right” to use the dry sand and intertidal zone for recreation, saying that it had used the entire two-mile stretch of beach continuously for decades.

But in 2014, the court ruled that the town would have to prove that it had a “prescriptive right” on a parcel-by parcel basis.

Cedar Beach Road—the only way to access the beach by land—is private. The public had used Cedar Beach Road for decades with and without the permission of various owners.

In 2011, a group representing hundreds of individuals sued the road’s owner for access, claiming the public had a “prescriptive easement,” because it had “continuous use” of the road for 20 years or more.

But in July 2016, the Maine Supreme Judicial Court denied that claim. It ruled the public could not claim it had “continuous use” of Cedar Beach Road for 20 years or more, because, among other things, at one point, neighboring property owners who held an easement to Cedar Beach Road had posted signs and fences blocking off public access. In doing so, they had interrupted “continuous use.”

As it happened, after the court ruling, the property owner who was the defendant in the case said she would allow pedestrians to use the road as long as they follow certain protocols set out by the town, which prohibit things like leaving trash on the beach and making fires there. The property owner will monitor usage periodically to ensure that the protocols are being followed.

Paul Dest, director of the Wells National Estuarine Research Reserve, says that in the decisions over the past decade, courts have set the bar high for the public to establish its ability to win a case based on “easement by prescription.”

Though the court cases were resolved, their ripple effects are likely to be felt for years.

“What the Maine Supreme Court revealed in the Cedar Beach decision is that individuals, groups, or municipalities must meet a high standard if they are going to make a successful prescriptive easement claim to access the coast, or use coastal land, if it is privately owned,” says Dest, who was project coordinator for the guide. “This was the message in the Goose Rocks Beach decision in 2014. Cedar Beach validated that perspective.”

“In many cases, people have had handshake agreements for access, and assume it would continue after the property was sold. But then access is lost, and there are not many other options,” says Warren Whitney, land trust program director for Maine Coast Heritage Trust. “The best way to make sure you don’t lose public access is to take ownership of these places, and not rely on government or certain court rulings.” 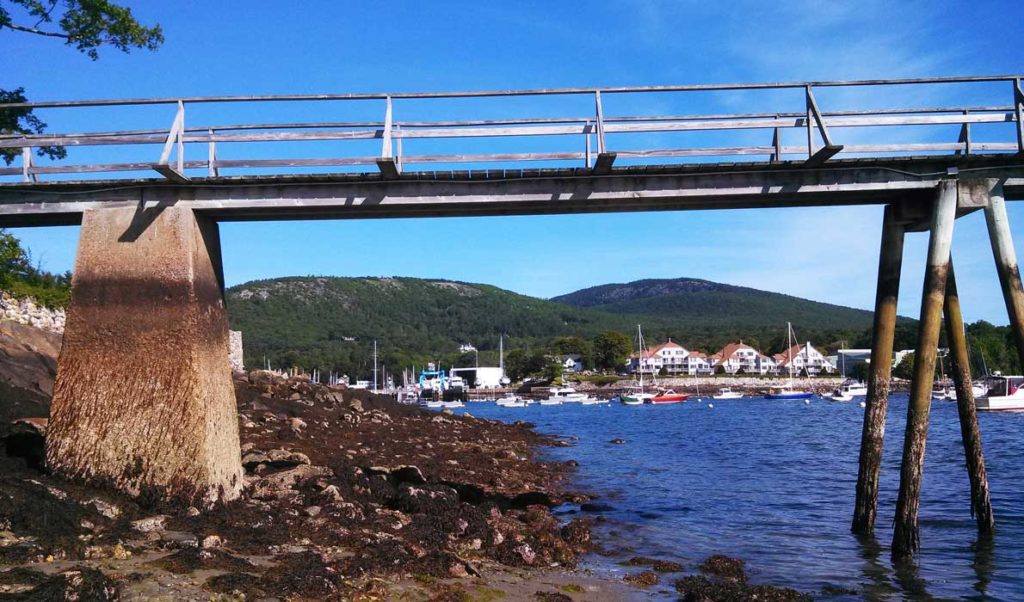 A view of Camden Harbor as seen from the shore near Laite Park.