About three miles west of Belfast’s downtown is a piece of land the city once considered essentially useless: the capped landfill on Pitcher Road. Today, that landfill is an unexpected boon to the city.

On the last day of 2015, Belfast became the first municipality in Maine to put into operation a photovoltaic solar array on a capped landfill.

“Electricity prices are very volatile and a huge portion of the city’s budget is energy costs,” said Sadie Lloyd, Belfast’s assistant city planner who staffs the city’s energy committee. “There’s nothing you can really do about that unless you start looking at solutions like this.”

Belfast’s solar array consists of two rows of solar panels, each 260 feet in length. They take up about 7,200 square feet of the approximately 10-acre landfill, which was closed in 1993 and capped in 1997. The solar array has an electric generation capacity of 122.8 kilowatts and is expected to generate about $20,000 worth of electricity annually, depending on electric prices, said Lloyd.

The landfill solar array is the second solar project Belfast has done with ReVision Energy, a renewable energy contracting company based in Liberty. The first project was a 45.9 kilowatt solar electric array on the roof of the city’s fire station. The fire station and landfill arrays will generate about 18 percent of the city’s electricity annually, said Lloyd.

“For some people, that sounded like it was small, but a municipal electrical bill is huge and offsetting almost 20 percent is meaningful money for a budget,” she said.

The benefit to the municipal budget is part of the reason putting solar arrays on capped landfills is part of a growing national trend.

According to the Environmental Protection Agency, the number of solar array projects on closed landfills has been growing steadily across the country. In an October 2015 publication released by the EPA’s RE-Powering America’s Land initiative, of the 80 former landfills that the EPA knows about that have solar array projects, 61 were completed between 2012 and 2015.

Massachusetts leads the country in these projects. The Massachusetts Department of Environmental Protection has approved 73 of the projects totaling about 143 megawatts, said Sarah Weinstein, deputy assistant commissioner of Mass DEP’s Bureau of Air and Waste. Forty-four of those projects, generating about 86 megawatts of power, are operating now, she said.

The growth in these projects is due, says the EPA, to the greater availability of renewable energy resources and incentives such as federal tax exemptions and net metering policies. The debate about such policies, particularly net metering, where utility companies credit homeowners, businesses and others using renewable energy sources generating electricity that is fed back into the electric grid, has raged across the country recently, as renewable energy projects increase.

Maine, unlike Massachusetts, does not boost federal renewable energy incentives with its own for projects like solar arrays on capped landfills, but that has not curtailed interest from municipalities in the state, said Steve Farrar, an environmental engineer with the state’s Department of Environmental Protection.

“Landfills are a good candidate to do this type of project,” he said.

In the last two years, 12 to 15 cities and towns, including South Portland, Falmouth and Portland, have contacted DEP about solar array projects on closed landfills, he said. Since DEP expects more will show interest, it just finalized guidance on such projects.

Patrick Woodcock, director of the state’s energy office, understands why municipalities are interested in solar projects on closed landfills, but he couldn’t offer any assurances that the state will one day offer incentives like Massachusetts’. The state, he said, continues to refine its energy policies to ensure they work for all ratepayers.

“It’s unequivocally positive that we’re having this discussion, however, it is also important that we don’t lose sight of the less sexy municipal projects that would lower bills,” such as reducing heating oil consumption through better insulation, Woodcock said.

Because Maine doesn’t offer financial incentives to solar investors such as ReVision Energy, these companies usually require customers, like the city of Belfast, to pay a premium. In the case of Belfast’s landfill project, that premium is $50,000, which the city will pay in five yearly installments of $10,000, said Sadie Lloyd.

Despite this cost, for Belfast’s city councilors, the investment was a “no brainer,” said Lloyd. “I think one of the things that seems to resonate with people is that it does have a payback and it will provide the city with a real financial benefit. It’s unusual to invest in a project that’s going to actually give you money down the line.”

Belfast and ReVision Energy negotiated a power purchase agreement, or PPA, a contract that is common for these types of projects. PPAs allow municipalities to proceed with almost no upfront costs and the contractor, in this case ReVision Energy, reaps the benefits of tax incentives.

In the Belfast-ReVision Energy PPA, ReVision Energy was responsible for the majority of the upfront costs—on-site work to meet state DEP requirements to ensure the integrity of the capped landfill, the solar panels themselves, and the installation of the system. The city paid Central Maine Power to establish an electricity connection at the landfill.

“The cost of doing this through the PPA, even with the energy premium payment, is less than if we bought the system ourselves and installed it ourselves,” said Lloyd.

After six years, Belfast has the option of purchasing the solar array system from ReVision Energy. The city calculates the payback of its investment to be about 14 years on the system, which has an estimated lifespan of 40 years, Lloyd said, at which point the city will essentially be generating electricity for free. 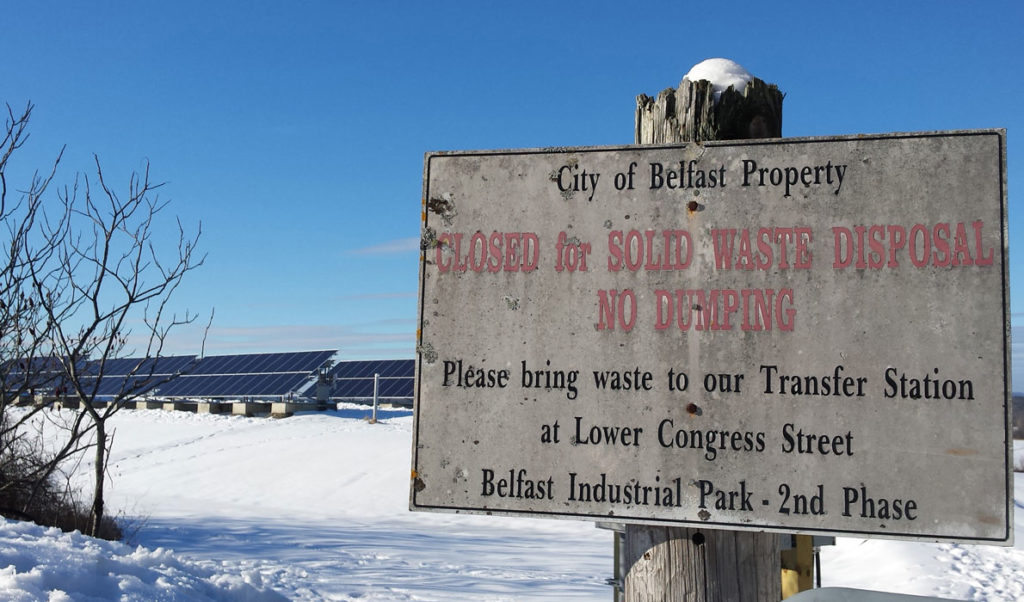