Our government’s decisions project a story to the world about who we are as people. When we step off a plane in another country, we encounter these stories, as the people we meet repeat them back to us. We find that we are asked to personally represent and explain the United States, whether we want to or not.

When our leaders’ decisions do not represent us, we have the opportunity—and indeed, the responsibility—to tell our own stories.

I was at breakfast recently with Emillia Noordhoek, the founder of the Hawaii-based Sust‘ainable Molokai, along with a dozen other community energy leaders from around the world. We were raising our morning coffee to celebrate the decision by Hawaii’s governor to sign the Paris Climate Agreement. We deliberated, with hope, about which states would follow, and I felt a sense of relief.

I had been on Samsø Island in Denmark for the previous few days and I had been questioned repeatedly about the state of affairs in a U.S. led by President Trump. Having lived abroad at various times in my life, I am accustomed to witnessing the U.S. being both lionized and despised, based on how our leaders engage with the world.

For me, it has always been an opportunity to show people who I am as an American, and to tell a story different than that told in the international press.

As I packed my bag to leave for six days in Denmark and Norway, I knew the issue I would face abroad would be the recent decision by President Trump to withdraw from the Paris climate agreement. I knew the U.S. would be vilified for this, particularly in these countries where you can’t take a step without seeing innovative approaches to reducing carbon emissions.

I believe the U.S. decision to withdraw from the climate agreement is completely irresponsible.

Here in Maine, the lobster industry recognizes climate change as a serious threat. Vinalhaven, Islesboro, and Chebeague islands already are working on plans to deal with sea level rise, and others are looking to learn from their work. In response to community concerns, our organization is launching a project to support local leaders who want to ready their communities for future storms and floods, and the National Academy of Sciences has awarded us funding for this work.

At the recent climate march in Augusta, lobsterman Richard Nelson of Friendship spoke about what he is seeing.

“The discussion of what’s going on out on the water is the easy part. The Gulf of Maine is warming at a rate higher than 99 percent of the world’s oceans,” he said, and the waters are becoming more acidic, “driven by the influx of nutrient-laden fresh water and atmospheric CO2.”

“We now are seeking answers to the decrease in shrimp and cod fish,” while simultaneously seeing “an increase in anomalous species, invasive species, as well as our old standby, lobster.”

Lobster landings have increased, he observed, yet larval settlement indexes, which predict lobster stocks in the future, have already taken a down-turn.

“Lobsters, we are told, thrive with a certain amount of warming, which can lead to higher growth and reproductive rates, but when those same creatures reach a well-defined temperature threshold, they begin looking for another home,” he said.

“We have already seen changes linked to ocean warming—shifts in populations from shallower to deeper waters, inshore to offshore, from southern New England towards the Canadian border.”

Richard is a thoughtful person, and someone who cares deeply for the world around him. Yet his voice does not carry as far as our president’s. I take Richard’s voice with me when I travel and speak to international audiences, in hopes of painting a different picture of the U.S. than people expect.

Coastal and island communities in Maine and around the world are on the front lines of climate change. We are experiencing impacts and are steeling ourselves for the change to come. The staff and board of the Island Institute are rolling up our sleeves and getting to work to prepare. We are doing our part to reduce our carbon emissions, and we are telling our stories.

From our perspective, the decision to withdraw from a global approach to dealing with carbon emissions is grossly irresponsible. If we could sign-on as an organization, we would, and proudly follow in Hawaii’s footsteps. 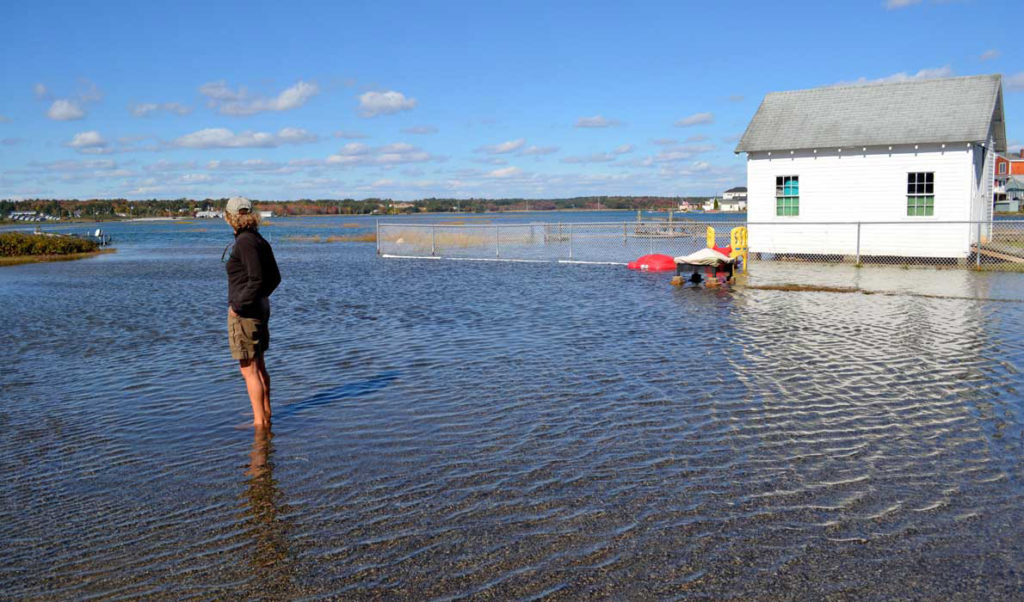 An especially high tide in Wells a few years back shows the Maine coast's vulnerability to rising sea levels.