Like many cities in New England and across the country, Portland is facing a housing crisis. There’s not enough housing to meet the demand and the cost of housing often far exceeds what many people can afford to pay.

And just like their peers, Portland’s leaders are making easing the housing crisis a priority.

Since the start of the year, city administrators and councilors have been talking to their peers and housing experts across the country and to members of the community to thoroughly understand the scope of the crisis and determine a plan of action. By May, they had about 135 policy recommendations.

To determine what has the most value, both the public and an internal workgroup were invited to discuss the list in May. The results were analyzed in a report produced by Jack Kartez, emeritus professor of community planning and development at the University of Southern Maine’s Muskie School of Public Service, who also facilitated the May public meeting. The city’s housing committee is now digesting that report and settling on its first moves.

According to the report, a number of factors fuel that demand, including ongoing fallout from the housing crash, such as more restricted access to home loans, downturns in the economy, stagnant and retreating income levels, and demographic trends such as baby boomers downsizing and increasing numbers of single-person households.

The hot market has led to evictions as some landlords sell their buildings or upgrade them to take advantage of the rising market. It has also led to increased rental costs that are frequently out of reach of low- and middle-income households.

According to the U.S. Department of Housing and Urban Development, families paying more than 30 percent of their income on housing are considered “cost burdened,” meaning they may have to forgo or limit spending on such things as food and medical care.

There has been no cohesive strategy at the federal level to address the housing crisis, said Harvard’s McCue, leaving local communities to figure out a solution to these issues.

“A lot of the new efforts and innovations are coming at the city level with strong mayors and city councils trying to take matters into their own hands,” he said. “They’re the ones really feeling the pressure of these housing cost burdens and the tightness in the rental markets and the high costs of ownerships.”

In October 2014, Boston launched Housing a Changing City: Boston 2030, a housing plan that will guide the city to stabilize its housing market, bring rents and housing costs under control and create 53,000 housing units by 2030 to accommodate various income levels from workforce/low-income to seniors. Among its strategies are incentives to drive down development costs, including zoning relief; permitting reform and tax incentives; and better use of city-owned land.

These are strategies similar to those undertaken by the state of Connecticut as it, too, grapples with its housing crisis. In 2011, following the election of Gov. Dannel Malloy, Connecticut’s leadership put affordable housing on the front burner, said Evonne Klein, commissioner of the Connecticut Department of Housing. “Here in Connecticut, affordable housing options are important as a smart investment,” she said.

The state created ambitious goals and launched a number of initiatives, including one aimed at homeless veterans. Last fall, the state received federal recognition for becoming the first state in the country to end chronic homelessness among that group, and earlier this year, became the second state to effectively end homelessness among veterans.

Since 2011, more than 8,000 units of affordable housing have been completed statewide. Currently, another 2,700 are under construction and an additional 5,200 units have funding commitments, Klein said.

“[Leaders] need to put affordable housing on their list of priorities, because we know it’s a need,” she said. “We build the sidewalks. We fix the roads. We build schools if we need them. For folks who need an affordable place to live, we should be meeting that need.”

MEETING THE NEED IN FOREST CITY

With the public and internal examination process complete, Portland’s leaders are preparing to take action. The process identified core issues, with the top two housing insecurity and emergency situations, and increasing all kinds of housing.

Among the steps the housing committee might take are:

But these options are just a start, said Jill Duson, chairwoman of the city’s housing committee.

“I think we need to make a commitment to continuous improvement and continuous engagement on these issues because it’s a long-term thing,” she said. “We need to stay on top of housing needs.”

To that end, the committee will settle on short-term (within the next six months), medium-term (nine to 12 months) and long-term (12 to 18 months) projects, she said. As projects are accomplished, they will revisit the list to see what next can be done and re-evaluate to see if new things should be added, she said. 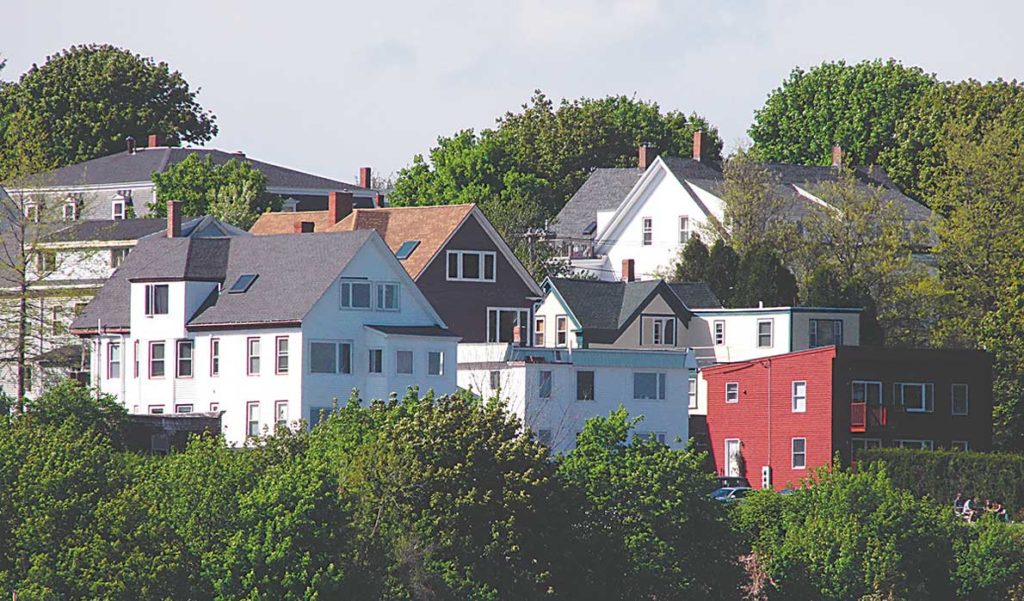 Houses in Portland's East End. A report has concluded that almost half of the city's residents are paying too much in rent.