Riding a bicycle along a quiet, island road on a summer day is a near idyllic experience. Except when it’s not.

Late last year and through the new year, community leaders on Chebeague Island worked to craft a set of recommendations for changes that are aimed at keeping bicyclists safe, or at least safer. The action came after a near tragedy, islander Eldon Mayer said.

Actually, he explained, there were five near tragedies involving bicyclists in close succession.

“We have two roads that go the length of the island,” which is mostly rural, “with a few cross roads,” Mayer said. And because the island is not served by a state ferry carrying vehicles, there may be less traffic than on other islands.

But despite those favorable conditions, in August there was a collision between a bicyclist and a vehicle “that came within inches of being a tragedy,” he said. A child riding a bicycle down a steep hill, approaching an intersection at which he had to turn left or right, turned sharply right and collided with a delivery truck.

The truck driver, Mayer said, was able to see what was about to happen, and stopped the vehicle. The child sustained cuts and bruises and was taken off-island to a hospital, but escaped serious injury.

A group of 40 islanders gathered in October to discuss their concerns. Participants did not want to see the effort dragged out through many meetings, or fade into a report that collected dust, Mayer said.

The urgency comes in part because of what seems to be an upswing in the number of bicyclists touring the island. The Chebeague Island Inn offers a rack of bikes for its guests to use, and with the Chebeague Transportation Company’s Islander boat running every 90 minutes in the summer, many daytrippers bring their own two wheels.

“A lot of kids don’t wear helmets,” he observed, nor do many adults. Maine law requires helmets be worn by those under the age of 18, but adults are not required to do so.

Mayer said the group considered adopting a municipal ordinance requiring all bicyclists to wear helmets, but abandoned the idea.

“That’s so much of an uphill battle,” he said.

Only recently, a stop sign was posted at the island’s only four-way intersection, and a 15 mph sign also was recently installed. In all, the island has about a dozen speed limit signs, but Mayer believes their warnings are not heeded. An online survey of islanders showed strong support for lowering speed limits.

The road safety committee filed a summary of its top recommendations to the island town’s board of selectmen in late January, which included: 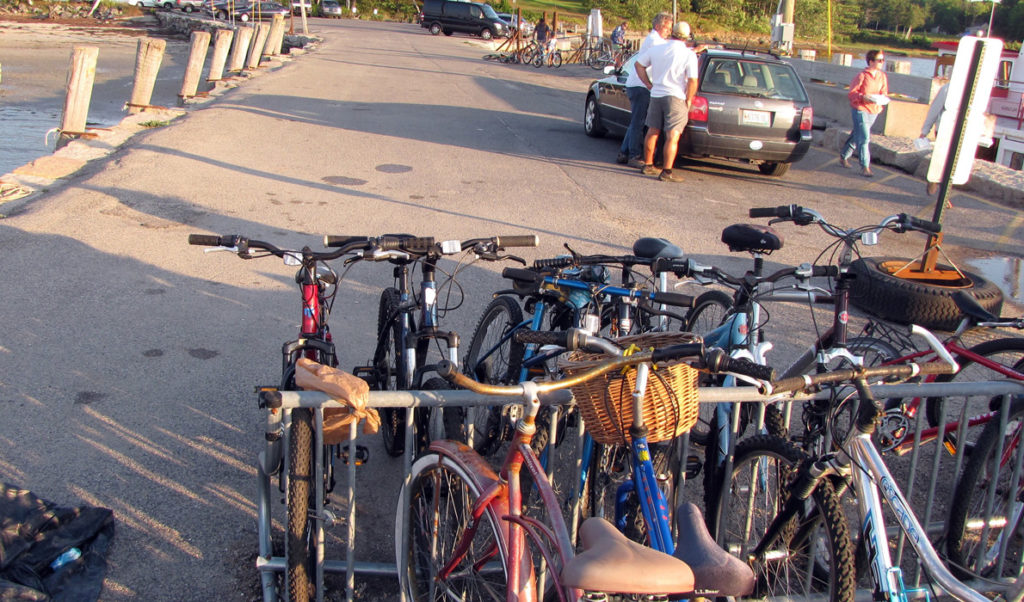 Bicycles in a rack on Chebeague Island's Stone Pier.