The Chebeague Transportation Company’s new ferry, scheduled for delivery by May 1, now has a name: Independence. A community-wide naming contest, which attracted 475 votes, chose the name from a short list of five.

The ferry, now under construction at Washburn & Doughty Associates, Inc., in East Boothbay, will replace the 34-year-old Islander, also built by Washburn & Doughty. The Islander will serve as a back-up vessel upon delivery of the Independence.

Chebeague Transportation Company (CTC) carries more than 155,000 passengers annually, making almost 4,000 scheduled trips between the Stone Wharf on Chebeague Island and Cousins Island in Yarmouth, a distance of 1.7 miles. During its operating career, the Islanderhad logged almost enough miles to get to the moon and back.

In addition to routine travelers, the ferry provides emergency rescues for the town, as well as transporting school children and law enforcement personnel.

TheIndependenceis a 56-foot steel-hulled ferry capable of carrying 119 passengers and crew. It will closely resemble the Islander in appearance.

“We’re very pleased to be building our new boat in Maine,” said John Rent, CTC president. “The Islander has been a workhorse for us, reliably serving the Chebeague community and visitors for many years. We look forward to a new boat with modern systems and state-of-the-art safety equipment.”

In January, CTC sponsored a name-the-ferry contest, with the Independence the top vote-getter. The winning entry was submitted by Beth Dyer, a daily commuter from Chebeague who is associate dean of library services and a research and teaching librarian at University of New England.

“Chebeague becoming its own town (in 2007) was the biggest thing that happened to the island as a whole since the last ferry was built,” she added.

CTC is a non-profit corporation, established in 1971. 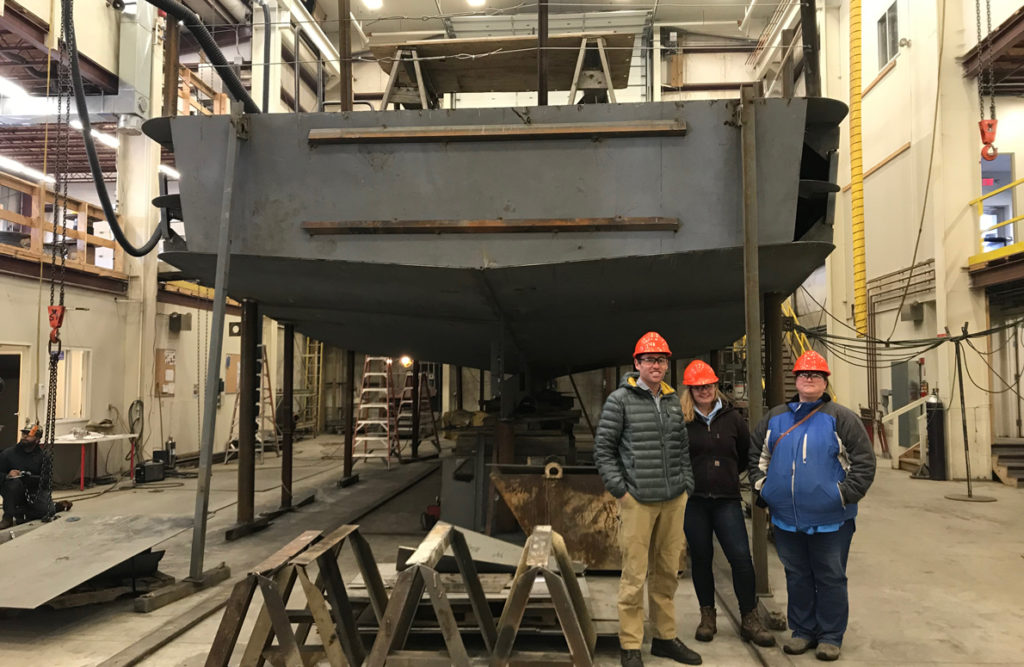 The Independence under construction at Washburn & Doughty Associates in East Boothbay. From left are the CTC's Matt Ridgway