As if on cue, a LifeFlight of Maine helicopter circled the island school, then hovered a hundred feet or so above the ballfield. Some of the 50 or so Chebeague islanders, sitting at picnic tables and milling about the wood-fired pizza oven, saluted the pilot with a wave, acknowledging the emergency service’s role in the island community.

The Aug. 6 community dinner was the occasion to award grants from the island’s newly revived Recompense Fund, and LifeFlight of Maine was one of the winners.

“It is on call all the time for Chebeague Fire and Rescue,” Leila Bisharat told the group. The fund awarded LifeFlight $1,500. A new helicopter for the nonprofit’s fleet cost $6.5 million.

As dramatic as the helicopter fly-over was, the grants made to groups operating on the ground—literally and figuratively—told the story of the fund’s impact.

The Recompense Fund—derived from an early name for the island—was launched in 1992 by island resident Eldon Mayer. In 2014, management of the fund was transferred to the Maine Community Foundation, though it still exists to benefit nonprofit groups working to sustain the island as a year-round community.

The big news is that an island summer resident has announced a donation described by the fund’s board members as being in the “six figure” range.

Recompense Fund board member Jim Van Fleet said the Raymond family, based in Arizona, has summered on the island for multiple generations. Robert Raymond launched the Raymond Family Foundation, and his son, Bob, now operates it.

The family foundation began small, but grew through shrewd management. 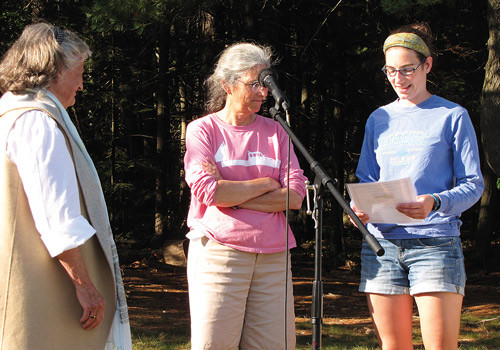 Leila Bisharat, left, acknowledges the work of Julia Maine, far right, whose work on the Chebeague Island Aquaculture Festival was supported with a grant from the Recompense Fund. Maine’s mother, Carol White is in the center.

“So they went from a modest, six-figure fund to $12 million,” he said. The family approached the island fund board and said, “We want to challenge the Recompense Fund the same way. He, unsolicited, came to us,” Van Fleet said of Raymond.

“They made a four-year commitment to us,” he said. “They want us to continue to grow the endowment.” Specifically, the Raymond family wants to see the island fund endowment grow to $1 million within ten years, while also awarding more grants.

But it’s not just big donors who are playing a part. 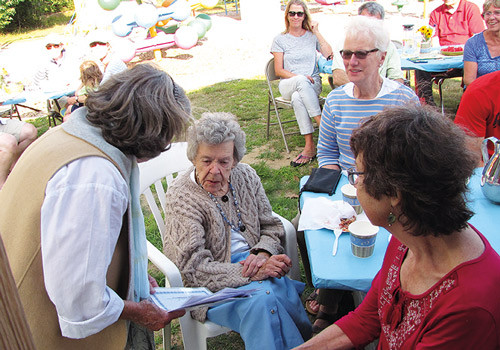 Bisharat and Van Fleet highlighted the gift of the oldest contributor—Margaret Gaston, who was on hand at the event after recently celebrating her 100th birthday, and who faithfully posts her donation on the first of the year. And the youngest donor, Isaac Julian, 26, who lives in California, also was honored, and who sent along his sentiments, acknowledging the role the island, as “the most beautiful place on Earth,” played in his life.

The Kids’ Place, the island’s daycare center, was given $14,000 toward work on its building, including improvements to the foundation and more insulation. The center’s director, Carrie Ridgway, accepted the grant, saying the children will be safer and more comfortable with the work being done.

The Chebeague Recreation Center was given $9,000 toward repairs to its building. The fund had earlier paid for a study of the building and the swimming pool it houses.

“We always are grateful to the Recompense Fund, who had our backs,” said Sandy Whiston on behalf of the center.

Kim Hamilton, who serves on the fund’s board, introduced the $7,975 grant to the Island Commons, the eldercare facility, by describing it as “welcoming, caring, patient, hopeful… our constant companion,” where “the door is always open.”
Accepting the grant on behalf of the center was Susan Stranahan, who explained that it would pay for building work.

“This grant is badly needed,” she said, and joked with repairs, the center’s administrator would “no longer have to move a potted plant to a spongy part of the floor when the state inspector arrived.”

Other grant winners were: 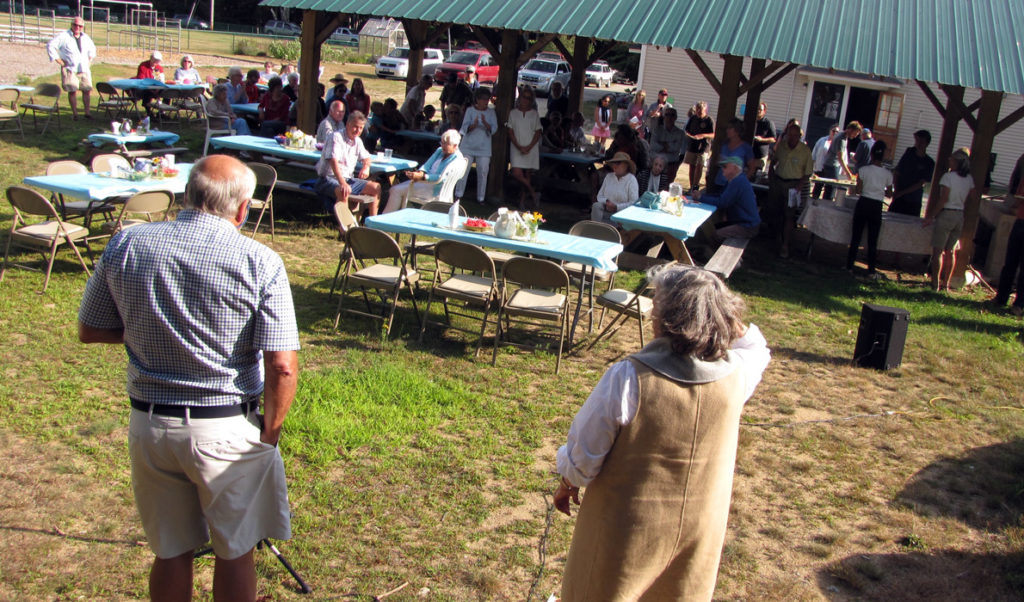