Islanders know first-hand the inherent dangers of living and working around the sea. Many have survived close calls on the water, but have also lost family and friends. So it is not surprising that more than 220 people turned out to attend the dedication of Chebeague’s Toll of the Sea Memorial on Aug. 21.

The bronze plaque attached to a large granite boulder lists the names of 56 men, women and children who were connected to Chebeague and lost their lives in marine related events dating back to 1805.

The memorial was funded by contributions honoring the late Sanford Ellsworth Doughty, a long-time fisherman and Chebeague native. The memorial is located in the field overlooking Chandler’s Cove Beach. The site was meaningful not just because Doughty had caught hundreds of thousands of bushels of herring in the adjacent cove, but also because he and his late wife Mabel sold the land to the town in the 1980s at a discounted price. The parcel includes nearly ten acres and 300 feet of sand beach.

Sanford Doughty’s family had more than its share of losses. Three of Sanford’s brothers, an uncle, six nephews, a great-grandfather and numerous cousins and friends are among those listed on the memorial.

The memorial is a reminder that maritime tragedies are not limited to those lost at sea. Mariners also died of malaria, yellow fever, heart attacks and horrific accidents.

A newly married couple was swamped in a freak snow storm; children fell into the ocean while playing around the shore; a young fisherman was lost when his dory became separated from the vessel in the fog; one man was lost when a Russian cargo ship rammed his fishing boat; a father and his two sons left on a New Year’s Eve fishing trip during World War II and never returned—the stories remind us that tragedy strikes even in beautiful places. 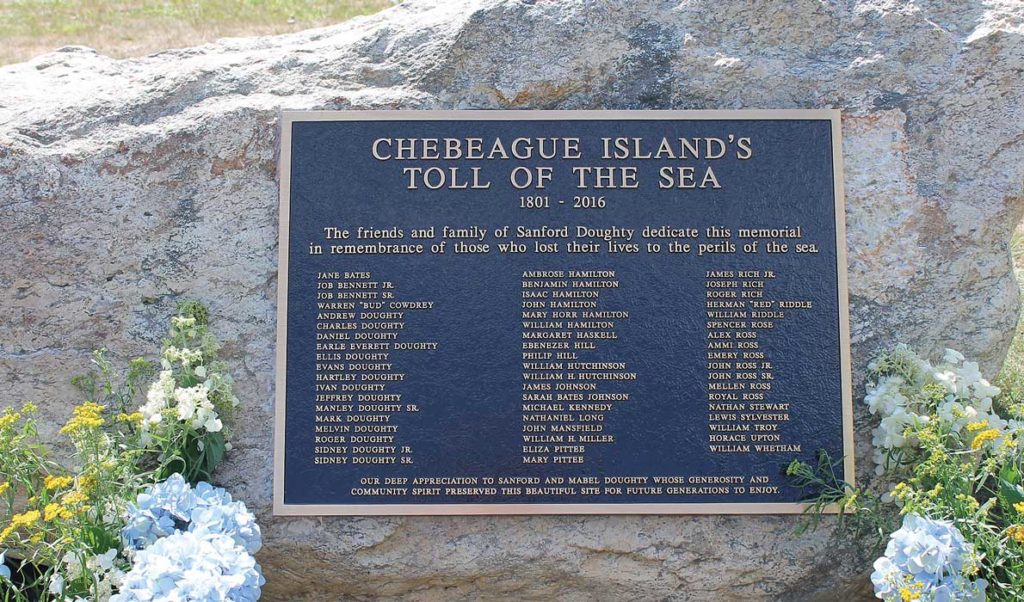 The Toll of the Sea memorial on Chebeague Island.