For many seeking elected office—particularly on the Republican side—endorsing the concept of man-induced “climate change” is a vote-killer. But panelists at a Thursday, March 3 session of the Maine Fishermen’s Forum seemed to step right over the politics to address what they are seeing on the water. And what they are seeing is a rapidly changing ocean environment.

The “Questioning Our Changing Oceans” discussion, sponsored by the Island Institute (publisher of The Working Waterfront), Environmental Defense Fund, The Nature Conservancy and Maine Coast Fishermen’s Association, gathered scientists and fishermen on the panel. About 350 attended the three-hour long session.

Gerry Cushman, a lobster fisherman from Port Clyde and president of the Maine Coast Fishermen’s Association, opened the discussion by contrasting catches from 20 years ago.

Late in the discussion, John Bullard, northeast regional administrator for NOAA Fisheries, asked the panel what group could most effectively “get through to people” about the impacts a changing climate is having on the marine environment. He then answered that rhetorical query, saying, “I think fishermen are reliable observers of the environment.”

Resource harvesters, perhaps more than scientists, can persuade the public that carbon pollution must be curtailed, several others affirmed. Some of panelists from outside Maine—who fish in Alaska, San Francisco and Western Australia—all told dramatic tales of changes in their fisheries.

Panelist Keith Colburn, a crab fisherman from Alaska who is seen on the reality TV show “Deadliest Catch,” acknowledged that fishermen have been slow to accept the climate change idea. But Colburn is a believer.

“The most dramatic changes have been in the last 15 years,” he said. With the swings in weather in those years, he no longer can predict where to find the Alaskan crabs he chases.

“It’s a subject no one wants to admit exists,” Colburn said. “Is it scary? You bet your ass it is.”

If the climate is changing, as almost all scientists agree, defining the terms of the discussion is important. Andy Pershing, chief scientist at the Gulf of Maine Research Institute (GMRI), said climate must be distinguished from weather. “Climate is what you expect, weather is what you get,” he said.

“I like to think of it more in terms of the odds,” Pershing continued, employing a gambling metaphor. It is more likely to see a gray, snowy day in February than in May. “El Niño,” the warm water that accumulates off the west coast of South America and then affects weather in the northern hemisphere, “has really loaded the dice for us,” he said.

Air temperatures have increased an average of .07 degree Fahrenheit since 1980, he said, while water temperatures in the Gulf of Maine have followed suit.

“Right now, we’re at a record temperature at the 164-foot depth,” he said. In fact, the Gulf of Maine is warming four times faster than most of the world’s oceans.

Jon Hare, an oceanographer with NOAA, said most species off the mid-Atlantic coast are moving northeast, likely a response to warming waters.

El Niño, the continent-sized mass of warm water off South America, had first been observed in the late 1880s, he said. The 1997-1998 manifestation was the strongest version ever recorded, but the 2015-2016 version will likely top it.

“It’s probably going to go down as the biggest El Niño on record,” he said. In Maine, the winter temperatures were about 3 degrees warmer than normal, he added.

But Gutner, who said he had been a skeptic but was no longer, confessed that calling such developments “climate change” in his role as a TV weatherman risks angering viewers who believe the science isn’t settled.

John Mellor, who fishes for Dungeness crab off San Francisco, shared a sobering tale. After spending a month repairing gear and paying crew in preparing for the season to start, regulators derailed his plans.

“OA [ocean acidification] levels were so high they closed the fisheries,” he said. “You guys are enjoying the lobster fishery, but you better keep a close eye on the water.”

In the waters off western Australia, changes meant record profits to those in the lobster fishery, said Linda Williams. Regulators reduced quotas for fishing boats like those her family operated, but the smaller catch led to record profits with less work.

“The ocean’s changing,” Williams said. “Don’t be afraid to change with it.”

Buddy Guidon, who fishes for red snapper and other species out of Galveston, Texas, said larger, land-based storms associated with climate change impact the Gulf of Mexico fishery. Floods as far north as Minnesota bring chemical run-off from farms and cause “dead zones” in the Gulf where no fish are found.

In the question period, panelists and participants expressed the urgency of solving the problem

Bullard of NOAA Fisheries sounded a call to action as the discussion ended:

“We have the technology to solve this problem without breaking a sweat.” 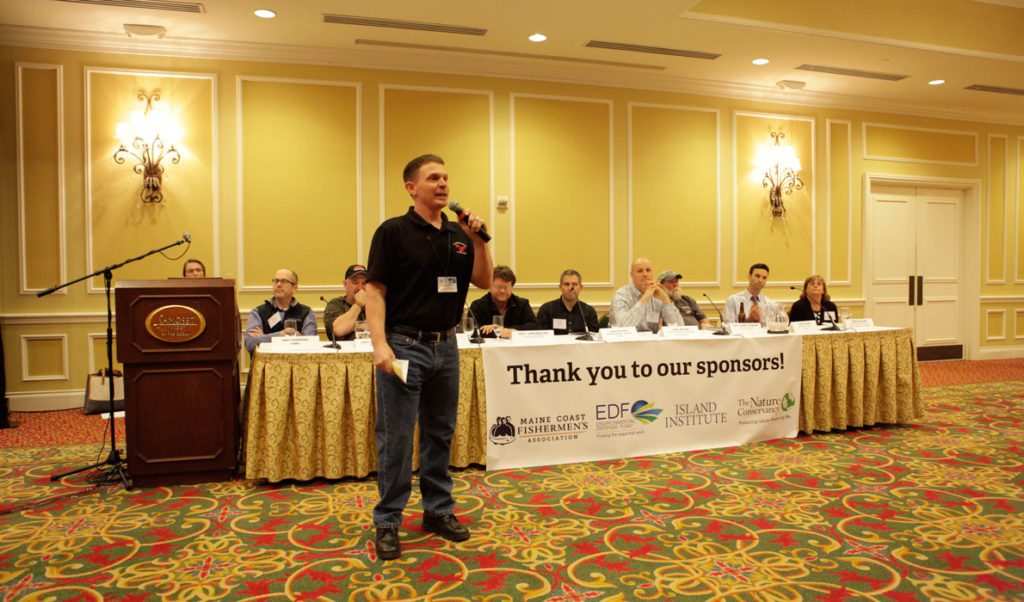