By mid-September, island life has usually slowed down a bit from the frenzied social pace of July and August. The third week of classes at the Ashley Bryan School is underway with 17 students this year. Nine are from Islesford and eight commute daily from Great Cranberry. The ferry schedules have returned to their “off-season” (but not yet winter) times, and high school teachers and students are once again daily passengers on the 6:30 a.m. commuter boat.

By this time, I and others have usually made our way through the odd feeling that comes at the end of August. Overtired from working days and staying out later than usual at night, we have scrambled for every last chance to see friends before saying those parting words, “Have a good winter!”

We see introvert light at the end of the extrovert tunnel called summer.

Yet, when people have left and we finally have time to ourselves, the loneliness is swift and palpable. We look at each other, give a wry smile, and say, “It’s that weird time again, the transition.”

The best visual description I’ve ever heard for this time of year comes from my friend Cory who once said, “It’s like those cartoon characters who run off a cliff and keep running in midair until they realize the ground is no longer beneath their feet, and they drop.” We know it will pass and we’ll be just fine because fall is just about everyone’s favorite time of year here.

This year feels different to me. With school starting before Labor Day, and family arriving for Labor Day weekend, I have been busy right up to and beyond the end of August, so I’ve had no time to feel loneliness settling in. Instead, there is an air of worry and uncertainty from talk about the end of a ferry service that we have needed, used, and taken for granted for years.

Summer residents depart, not knowing what their return trip might look like next Memorial Day. For any of us who live here, not knowing when, how, or if a big change is coming is creating stress and insecurity. (That passing end-of-summer lonely feeling is not looking so bad right now.)

Putting an island recipe in this column is one of the things I do when I don’t know what else to write. I don’t have anything concrete to say about the future of island ferry service so this feels like the perfect time for me to give you my sister-in-law Karen’s famous recipe for chocolate cake. (It’s the one they serve all summer at the Islesford Dock Restaurant.)

When I am stressed and don’t know what else to do, it calms me down to bake. Maybe it will work for others.

Melt together in a saucepan and then let cool:

Stir together in a large bowl:

In another smaller bowl mix together:

Add the egg mixture to the flour mixture and combine well.  Then add and combine the cocoa mixture.

Grease two 9-inch round cake pans and divide cake batter between them. Bake at 350 degrees for 25 to 30 minutes.

Back to the ferry issue, which was raised by impending changes to Beal & Bunker’s service: The town’s transportation task force was created to make a long term study of boating issues affecting our islands, but it is now meeting weekly with members of the municipal advisory committee and the selectmen to find a solution for handling what may be coming soon, but is not yet a crisis.

I don’t envy any of our town officials and the tireless committee volunteers this task. It’s not their fault that it feels like cuckoo-ville around here with all of the rumors and unknowns swarming the air like flying ants. It’s not really anyone’s fault.

Those serving on these committees sure deserve our appreciation for taking time to be part of the solution rather than part of the problem. Instead of criticizing the unknown behind their backs, it just might help matters to show up at one of the meetings with an open mind and maybe even a chocolate cake. 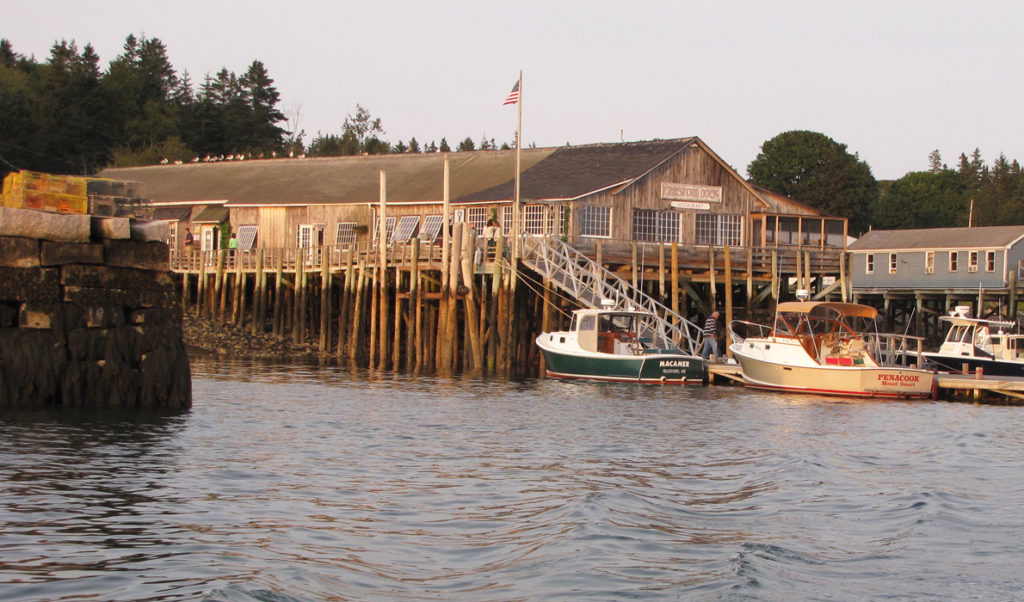 The Islesford Dock restaurant as seen from the water.