“The secret of change is to focus all of your energy, not on fighting the old, but on building the new.” —Socrates

In March of 2016, at the annual meeting for the town of Cranberry Isles, citizens voted overwhelmingly in favor of borrowing up to $1.2 million to “build a broadband network for Little Cranberry, Great Cranberry, and Sutton islands in order to provide long-term internet broadband services.”

Almost everyone agreed it would be fabulous, necessary, and forward-looking to have a broadband system that was 20 times faster than what we’ve had with our previous provider. It would be change for the good. Thanks to our tireless town broadband committee, Axiom Technologies was chosen to get us going with broadband internet service just at the time Redzone stopped serving our islands. Ideally, the fiber optic lines that would bring us up to speed could be buried in trenches.

Well, have you ever done any gardening on these islands or just tried to dig a hole? Rocks and ledge will slow you down or cause you to adjust your plan at almost every turn. It is no different for an internet trunk line. To have the system up and running within the original budget and time frame, much of the line would need to be strung from poles.

To use the existing Emera/FairPoint poles would cost an annual per-pole price that was deemed exorbitant. New poles, smaller in size and owned by the town would need to be installed. The thought of adding new poles to our islands made most people a bit nervous at first.

I thought about what it must have felt like when electricity first became available on the islands. I imagine there were people who didn’t like the poles or the wires, but eventually got used to them and enjoyed the availability of updating their life style to match the rest of the world. Those who didn’t want it didn’t have to use it, but they had to accept the change anyway. Now almost everyone lives on the grid, taking electricity for granted until the power goes out.

After five days without power in early November, I don’t think there is anyone in the state who considers the look of poles and wires when they are celebrating the return of hot showers, reliable refrigeration, and the quiet that returns when generators are turned off.

There was a time when few summer residents had telephones. My mother used to feel “stuck” at our family’s summer house for two weeks with two babies, no phone, and no car while Dad went back to work at Kodak, in Rochester. He would join us for the final week of vacation and then we all drove home together. Once, Mom had a high fever and walked through the woods dragging a toddler and a 4-year-old to use the nearest telephone to call the doctor. I believe my grandparents installed a phone the following year.

Think of how cell phone use has changed in just a few years. Most everyone carries one, though many residents still have land lines. No one actually likes the look of a cell tower (although a mono-pine always makes me smile at its effort to fit in), and yet they have become a necessary part of life.

We have come to expect what they provide and are annoyed when we find ourselves in an area with little or no signal. So it will eventually be with the small brown internet poles in the Cranberry Isles, and the high speed service they will help carry.

As planned, Redzone removed its equipment from the islands and stopped service on Nov. 1. The only available internet signal on Islesford is at the library. (During a power outage that service is not available.) Mother Nature interfered with the exact timing of getting the Axiom broadband system running, but we’re almost there.

Maybe by next summer, vacationers will manage to do a little work from the island on their laptops rather than having to interrupt a family vacation by returning to the office in New York or wherever.

By Thanksgiving, we plan to be thankful for the access to an amazingly fast broadband system. In the meantime, and in the spirit of the season, we can thank the determined broadband committee, especially Selectman Malcolm Fernald, Nate Brimmer and Mark Ouelette from Axiom, and Eric Keeler and his subcontractors from Fibernext for being friendly, answering endless questions, soothing frazzled nerves, and reassuring land owners that you were listening to their concerns and trying to make installing the system as unobtrusive as possible.

Thank you for working so hard to make the dream of true high speed internet service on the islands a reality.

Happy Holidays and a peaceful New Year to all. 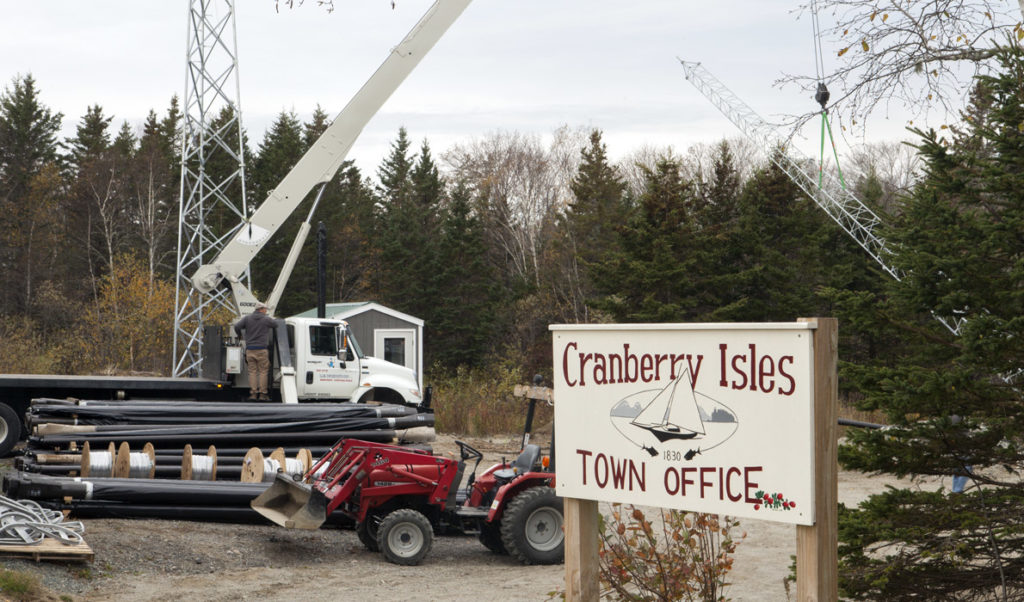 Work was underway in November to bring broadband-speed internet to Islesford.