Friends tell friends the truth, even when it’s unpleasant.

And that’s what the nonprofit Friends of Casco Bay group—which marks its 30th anniversary this year—is doing, reporting on the health of that busy, diverse bay. At three public events this spring, in Portland, South Portland, and Brunswick, Friends of Casco Bay staff reported on the bay’s threats and the responses needed.

Some of the hard truths have been well publicized, like the July 26 incident in which Portland’s East End sewage treatment plant inadvertently released 1.69 million gallons of partially-treated wastewater into Casco Bay.

Mike Doan, who has been with the Friends organization for more than 20 years and is a research associate, offered a primer for the audience of about 100, mostly supporters of the organization’s work, at Southern Maine Community College in South Portland on March 25.

“Climate change is happening faster than we could have expected,” he said. For most of the previous 30 years, the organization would be out on the bay doing monitoring work two or three times a month. Now, such assessments must be done more frequently, and with more sophistication, using data monitoring equipment placed in specially licensed lobster traps. 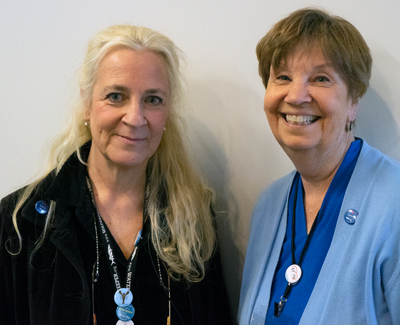 “Just as nitrogen fertilizes your lawn, it fertilizes algae in the water,” he said. Ivy Frignoca, who serves as the Friends’ bay keeper, showed slides of recent algal blooms that killed clams and worms on a tidal mud flat.

“And, as ocean temperatures increase, there are more and more invasive green crabs, that just demolish the juvenile clam populations,” she said. Recent research in Casco Bay has shown that less than 1 percent of soft-shell clams are reaching maturity, she added.

Among the improvements the Friends have helped implement is the requirement that wastewater treatment plants monitor nitrogen levels in their discharge.

Frignoca also noted that the Friends and several other nonprofits have urged the legislature to create a science and policy advisory council to guide the state response to many of the challenges wrought by climate change.

The group also is working to allow volunteers to conduct monitoring of the bay.

“It’s key for us to engage you,” said Cathy Ramsdell, executive director of the Friends, told the audience.

Casco Bay by the numbers Ivy Frignoca and Mike Doan of the Friends of Casco Bay.