The board of the Casco Bay Island Transit Authority, which operates Casco Bay Lines, voted 7-5 on June 25 to proceed with detail design for a new car ferry to service Peaks Island for the next 30 years. That new vessel will be equipped with a diesel/electric hybrid propulsion system.

The Maine State Ferry Service is evaluating how to best replace its aging fleet of passenger and vehicle ferries, and for the first time, is considering new vessels powered by hybrid diesel and electric fuel systems. The hybrid vessels are engineered to lower operating costs and reduce environmental impact.

“As we pursue our new-build program, Maine State Ferry Service wants to be a leader in carbon emissions reduction through use of new technology,” he said.

“We’ve been working with other (ferry) systems and with naval engineers and naval architects on the best strategy for powering these vessels. Hopefully, the next bids we put out, maybe as soon as this fall, will include specifications for a diesel-electric hybrid system with an onboard stored power (battery) system.”

The goal, Higgins said, is to eventually have a fleet of all-electric ferries.

Bill Pulver, the service’s chief operating officer, told the Ferry Service Advisory Board in March the service “is taking a serious look at more climate-friendly and cost-effective propulsion systems, which are being phased into service throughout the world.”

Pulver noted that European countries “are way ahead of the U.S. and North America when it comes to the use of hybrid/electric powered ferries, with interest and implementation in the U.S. and Canada growing.”

“There are different types and configurations of these propulsion systems,” Pulver said, including diesel-electric, hybrid diesel-electric, fully electric, and others. “When these terms are used interchangeably, it causes confusion,” he noted.

“We’ve also learned that every ferry route is different when it comes to the potential and options for hybrid/electric propulsion,” Pulver said, “given the length of routes, the types of seas, the size and power requirements of the vessel, the daily schedule, and land-based power capacity and infrastructure at the dock. We’ve learned, too, that shore-based charging infrastructure upgrades and peak power costs can be costly and challenging.”

Pulver said the ongoing construction of a new replacement ferry for the Vinalhaven-Rockland route is on hold as the ferry service evaluates whether hybrid diesel-electric systems are technically and financially feasible. The $9.5 million vessel has been under construction for two years by Washburn and Doughty in East Boothbay.

The ferry service is now weighing costs and benefits of available propulsion options beyond two emission-reducing diesel engines originally engineered for the Captain Richard Spear, which will replace the Captain Charles Philbrook, which has run the Vinalhaven route for 30 years.

The new 160-foot vessel is designed to accommodate 23 vehicles and 250 passengers, up from the Philbrook’s 17 vehicles and 221 passengers. The Captain Richard Spear was originally expected to be completed in April, but delivery is now expected this fall.

As more ferries are commissioned and delivered, the Captain Richard Spear will likely be reassigned to the Swan’s Island and Frenchboro service that connects those island destinations with Bass Harbor, Higgins said. As new ferries are phased into use, the vessels they replace may eventually be sold. “There is always a secondary market,” he said.

In Portland, the board of directors of the Casco Bay Island Transit District and its Casco Bay Lines ferry system will meet remotely by phone on June 25. The board is expected to vote on approving the final design for a new 599-passenger, 15-vehicle vessel it would add to its aging fleet of five ferries.

Launched over 150 years ago with coal-fired wooden ships that delivered tourists to island communities throughout Casco Bay, the Portland-based ferry system now handles one million passengers, 35,000 vehicles, and 500,000 pieces of freight each year, as well as U.S. mail deliveries. The destinations it serves from a dock on Portland’s Commercial Street waterfront include four islands—Peaks, Little Diamond, Great Diamond, and Cliff, all of which are within Portland’s city limits—as well as the independent towns of Long Island and Chebeague Island.

As proposed, the $11.2 million project—$1.2 million for design and an estimated $10 million for construction—would be equipped with a 900 kWh diesel/electric propulsion system instead of a conventional diesel system. The system’s newest vessel was built in 2013, and the oldest in 1985.

“We consider the useful life of our ferries to be 30 years, after which everything involved gets more expensive,” said Hank Berg, the Casco Bay ferry system’s general manager. “In terms of the alternative propulsion systems, we’ve received many positive comments from within the communities that rely on our ferry system.”

The Federal Transit Authority has committed $9.5 million to the project. Maine DOT has allocated $750,000, and the city of Portland will add another $59,000.

Another curious source of funding is expected to come from Maine’s share of the $21 million settlement of federal lawsuits against Volkswagen, the court-ordered penalty for intentionally tampering with emission control devices in some of its cars. Those funds are being allocated among all 50 states, Puerto Rico, Washington D.C. and Native American tribes, depending on VW sales of cars with faulty emissions software. 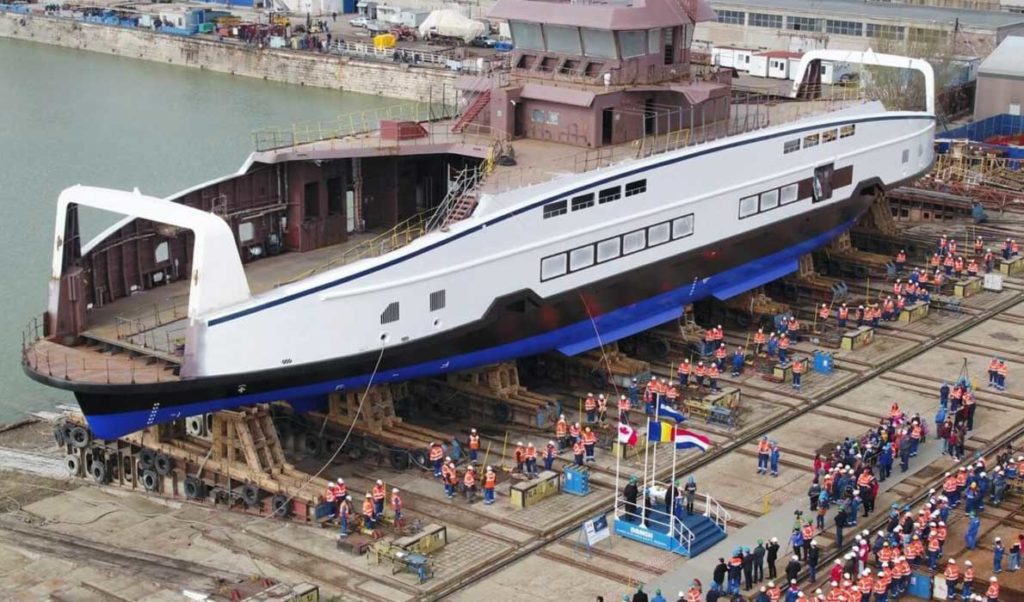 A hybrid diesel-electric ferry prepared for launch to serve isalnds in British Columbia.