Members of the committee that helped bring the sculpture “Home and Away,” by Robert Leverich, to Castine gather shortly after installation.

From 2007 to 2014, sculptor Jesse Salisbury from Steuben and a remarkable crew of project directors, volunteers, community members, friends, and family organized five international sculpture symposiums: two at the Schoodic Institute, two at Fisher Field in Prospect Harbor, and one at the University of Maine in Orono.

Every other year for a decade, these committed individuals solicited applications (more than 700) from around the world, maneuvered great hunks of granite (and some basalt), engaged communities, raised funds, and carved and cut, polished and placed a stunning collection of sculptures in the Maine countryside.

This handsome new book tells the story of this monumental endeavor. Fittingly, it starts with a biographical portrait of Salisbury, the symposium’s brainchild.

A Steubener born and raised, Salisbury began sculpting in the studio of Peter Weil across the street from the Ella Lewis grammar school. At Colby College he studied with master sculptor Harriett Mathews. Returning to his home in 1998, he began to show his work, developing a passion for granite. He also sought experience abroad, attending international sculpture symposiums.

It was at the 2004 Te Kupenga Stone Sculpture Symposium in New Zealand that he and fellow Maine sculptor Don Meserve (1938-2010) began hatching a scheme to invite sculptors from around the world to come to Maine to create works out of home-grown stone.

“Wave Sounds,” by Bertha Shortiss from Switzerland, is in Surry.

Part of the book is devoted to the nuts and bolts of putting on a big sculpture show. One comes to learn that such an undertaking requires drawing on specific expertise: community organizing and outreach, donor cultivating, grantwriting, accounting, graphic design, safety monitoring, crane operating, PR. And a leader, Salisbury, willing to go anywhere at any time to make a pitch for the project.

And then you need whole communities to get behind you. While all 34 sculptures were successfully sited in towns across the region, the process was a careful one of wooing and wrangling and connecting. Salisbury and company were sensitive to public response to what would be essentially permanent parts of the local landscape.

As the editors note in their introduction, “Abstract sculpture was uncommon in the region, and far less prevalent than the occasional courthouse lawn replications of Revolutionary and Civil War cannons and depictions of war heroes, some on horseback.” These works required leaps of aesthetic faith, and the organizers went out of their way to “encourage art appreciation.”

The book includes a short history of Maine quarries, highlighting their role in the creation of monuments and buildings in big Eastern cities. This time the granite would remain, reconfigured into stunning sculpture.

The second half features a two-page spread for each piece, with a short statement from the sculptor, a photo of the sited work, and several shots of the artist in action.

“Touch this stone/and feel creation” Bucksport poet Patricia Ranzoni writes in “Touchstone,” which serves as a kind of epigraph for the book. One comes away with a sense of the rock itself, the weight, color, and texture of what Goethe called “the loftiest and deepest-lying substance.”

It is somewhat misleading to call the 34 sited pieces the Maine Sculpture Trail. While the area covered is large—from Bucksport to Eastport and Calais and inland to Orono, Bangor and Old Town—it doesn’t cross the entire state as does, say, the Bernard Langlais Sculpture Trail. The Maine International Sculpture Trail seems a better handle, considering more than half the artists came from other countries and that the symposium idea has leapt the border into Canada, as is noted in an afterword.

Visitors in Milbridge gather near “Transitory” by Dominika Griesgraber of Poland.

“This is a story of community accomplishment,” writes Salisbury. The many photographs underscore this point: lobster dinners, unveilings, volunteers in the welcome tent, school children nestling in the smooth hollows of a sculpture. And the sculptors, drawn to granite from around the world and close at home, mingling with the admiring and awe-struck crowds while undertaking their singular acts of creation. In the end, it feels heroic.

A map of the sculptures found in Eastern Maine. 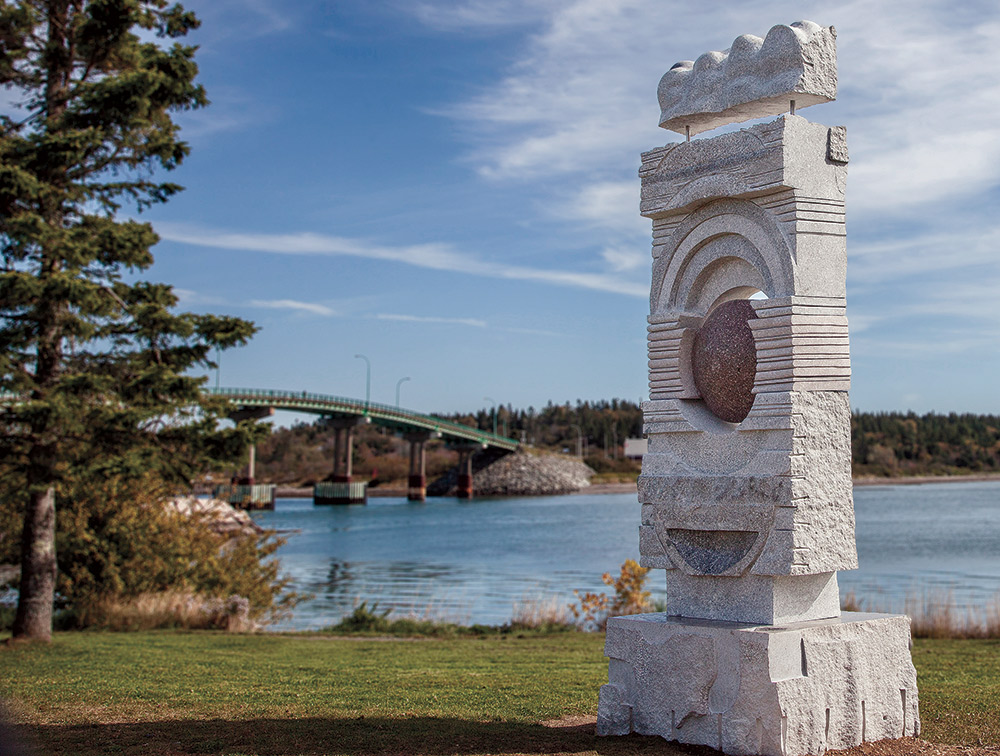