Maine has been a growing market for the small regional airline Cape Air, which has operated out of Owls Head, Trenton and Augusta for the last eight years, providing connections to Boston’s Logan Airport.

Cape Air, based in Hyannis, Mass., won the right to serve the three small airports (Knox County Regional, Hancock County-Bar Harbor and Augusta Regional) under the federal Essential Air Service program. That program subsidizes carriers to fly into and out of airports that would not be attractive to larger airlines because of low consumer demand.

Though there have been decreases, Lorino notes that Cape Air grew the number of passengers over the previous Essential Air Service airline carrier’s.

From Bar Harbor, Cape Air offers three flights a day in the off-season, but just one during the summer, sharing that season’s service with PenAir, a small carrier based in Alaska. Bar Harbor’s chamber of commerce awarded Cape Air its “rising star” award in 2012.

The company was formed in 1989 by pilot Dan Wolf, who began with three flights a day between Provincetown and Boston. Cape Air now operates 550 flights daily; in addition to Maine, the airline flies throughout New England (with the exception of Connecticut) as well as to small airports in New York, Kentucky, Missouri, Montana and Illinois. Cape Air also serves Puerto Rico, Micronesia, and the U.S. and British Virgin Islands.

Cape Air’s 1,100 employees took over ownership in the late 1990s. The company purchased Nantucket Air in 1994, and its service between Nantucket Island and Boston’s Logan Airport remains a cornerstone of the business, Lorino said. Seasonal flights to and from Block Island in Rhode Island also are niche.

In Maine, customers use Cape Air for a mix of business and leisure travel, Lorino said. The link to Logan is a big draw, she said, in part because once passengers clear security at one of the three Maine airports, they are able to continue through to Jet Blue flights without having to repeat screening.

Cape Air also has relationships with United and American airlines, Lorino said, which allows passengers beginning flights in Maine to use a single ticketing system.

Cape Air’s fleet includes 80 Cessna 402s, which seat nine passengers. It also operates four Britten-Norman Islanders that are able to land and take off on short runways, such as those on Block Island and on islands in the Caribbean.

While the Knox and Hancock county airports generate the expected vacation-related flights, Lorino said both also see a fair amount of business travel. Augusta’s traffic is predominately business-related, she said.

The company’s marketing strategy includes being visible in the communities it serves, Lorino said, so Cape Air has opened offices on Main Street in Rockland and on Water Street in Augusta. When staff are not serving walk-in customers, they handle incoming calls from throughout its service area, she said. 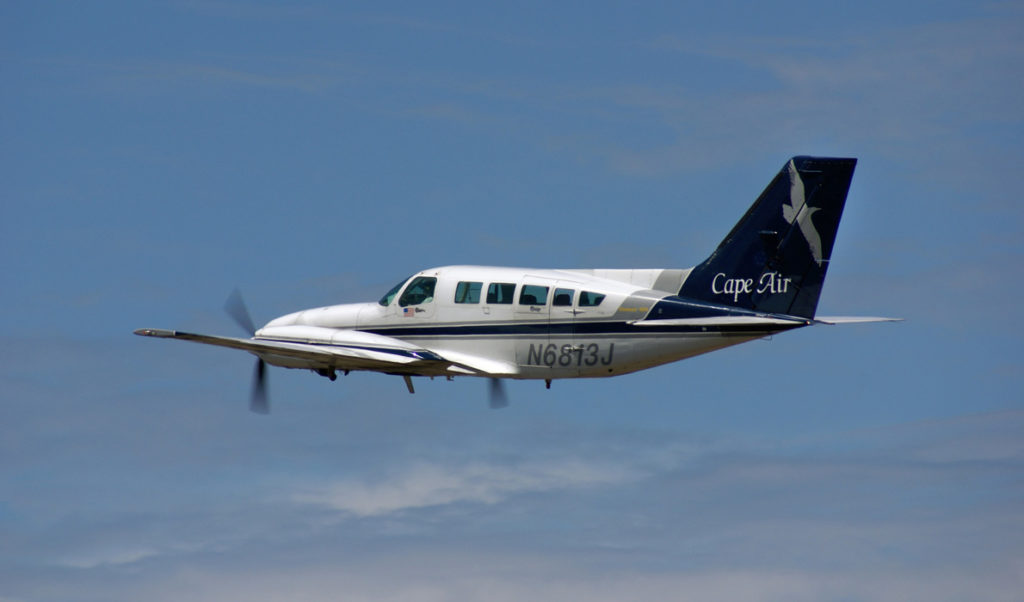 A Cape Air Cessna in flight.