In response to an unexpectedly deadly summer for the North American right whale population in the Gulf of St. Lawrence, the Canadian government, conservationists, and fishermen are racing to put in place new measures to prevent ship strikes and fishing gear entanglements for the critically endangered mammal.

In early July, Fisheries and Ocean Canada announced more restrictive ship speed limits in the Gulf of St. Lawrence, increased aerial surveillance to spot the whales in the gulf, and government funding to help area fishermen reduce the threat of entanglements, according to a CBC report. This is in addition to both temporary and season-long closures by Canadian regulators of some fishing areas in the Gulf of St. Lawrence to protect the whales.

At the time the new measures were announced, there had been six recorded deaths of North American right whales in 2019. Two more whale carcasses were found later in July. Three of the carcasses this year were likely from entanglement, while researchers are still trying to determine the possible cause of death for the other five.

Stakeholders agree that the rate of mortality for the endangered species is not sustainable. According to data shared by the New England Aquarium, there were 238 calves born and 45 detected mortalities of the right whales earlier this year. As of this summer, an additional 103 calves born and 47 mortalities have been observed.

It should be noted that detected mortalities likely represent at most 50 percent of all whale mortalities, said Heather Pettis, an associate scientist with the aquarium, in an email interview.

It is estimated there are only about 400 North Atlantic right whales extant.

This year’s surge in deaths took everyone by surprise, said Pettis. It’s believed that warming waters are stressing whale food sources, which is the calanuscopepods, pushing them into more cold, northern waters. As the whales work harder to pursue their food, they are also entering Gulf of St. Lawrence waters where protective measures like speed limits and gear limits were not in place.

“With lower quality prey and the energetic demand of having to travel farther to find food, whales may not be nutritionally healthy enough to get pregnant and carry a calf to term,” Pettis stated. “Additionally, we suspect that the increase in severity of entanglements has also elevated the overall energetic demand on the whales.”

The deaths have meant closures in new areas of the gulf, which has disrupted the fishing season for snow crab fishermen and lobstermen in the area. This has included more closures in fishing areas closer to shore, despite past data which has shown the whales often were not found there. As is the case in Maine, some fishermen worry they are being unfairly blamed for ship strikes.

Melanie Giffin, a program planner with the P.E.I. Fishermen’s Association, told CBC Newsthat while some recent whale carcasses have shown signs of entanglement with fishing gear, they were later found to have died from ship strikes.

Overall, fishermen who operate in the gulf know the importance of preserving the endangered whale, and they hope to continue to be included in finding solutions to the rapidly changing situation, said Martin Mallet, executive director of the Maritime Fishermen’s Union, in an email interview.

“Our organization, as well as others involved with this situation in the gulf, need to be constantly part of the discussion,” Mallet stated. “Fishermen are experts of the sea and will always have some of the best solutions towards solving oceans and fisheries-related issues.”

Recently, the Canadian government has made investments to alleviate some entanglement risk. For example, the snow crab industry in northern New Brunswick received a $2 million (Canadian) grant to test breakaway gear and ropeless buoys, according to a CBC report. Also, in late July, Canadian fishery officials and the Canadian Coast Guard worked to remove 101 lost snow crab traps and 9 kilometers worth of “ghost” fishing line in the gulf, according to a report.

There is no mistaking, however, that the odds have increased for the species’ extinction if current trends continue, said Pettis. However, she believes that the dedicated actions of stakeholders and the U.S. and Canadian governments offers some hope.

“The good news is that both countries have very dedicated and collaborative stakeholders committed to working out solutions that effectively protect right whales and industry,” she said. 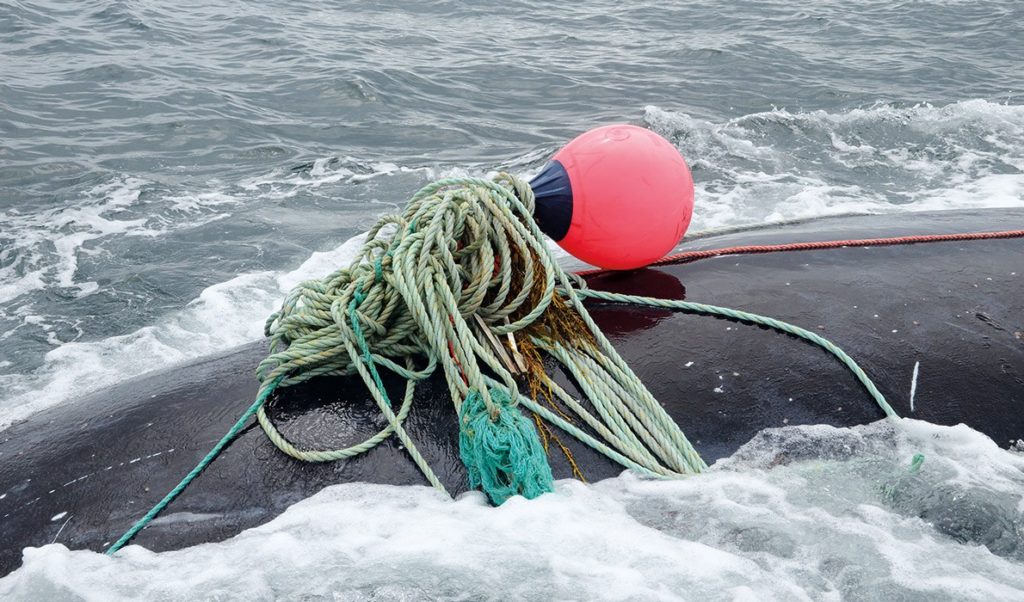 A right whale entangled in what is believed to be Canadian crab gear.