Fears are mounting that the state’s lobster industry might become collateral damage in conflict sparked by the Trump administration’s distrust of free trade agreements.

In recent years, Maine lobster exporters have established new international markets, thanks in part to several free trade pacts between the U.S. and other nations. But now advocates fear Maine lobster has been put at a competitive disadvantage with Canadian lobster as free trade deal negotiations grind to a halt.

As the lobstering season kicks into gear in Canada’s Maritime provinces, Maine’s lobster industry must begin to contend with the first concrete results from this sharp shift in economic policy.

In late 2017, the first provisions of the Comprehensive European Trade Agreement (CETA) between Canada and the European Union (EU) took effect. One provision of the agreement removed an eight percent tariff on the EU’s importation of live Canadian lobster. The deal also will phase-out tariffs on processed Canadian lobster products bound for Europe.

The U.S. has no such agreement in place with the EU, and the eight percent tariff remains in place for lobsters imported from Maine and other states to Europe.

Maine sells anywhere between 12 percent and 20 percent of its lobster to the EU, according to various estimates. Already, there are anecdotal accounts of Maine lobster exporters feeling pressure from EU customers to lower prices because of the trade agreement.

Canadian exporters also are already reporting a benefit from CETA, according to Geoff Irvine, executive director of the Lobster Council of Canada.

“I have not seen any data yet, but anecdotally I have heard that our exporters are once again able to compete in southern Europe in the live segment which has typically been served by U.S. lobster suppliers,” Irvine wrote via email.

While the most immediate impact may be felt by a small subsection of lobster exporters, McCarron says CETA has the potential to affect the whole industry even before it’s phased in completely.

“It could affect all of us because those lobsters (that had been shipped to the EU) need to find a place to go,” she said.

The lobster industries of Maine and the Martimes are closely intertwined; their lobstering seasons are largely complementary, and processors and exporters in the North Atlantic region buy lobster from both sides of the border. That doesn’t mean, however, there aren’t times when economic policies or market factors have created winners and losers.

From 2012 to 2017, for example, South Korea imported U.S. lobster tariff-free while imposing a tariff on imported Canadian lobster. Last year, Canada completed a trade deal that leveled the playing field.

Many lobster processors have investments or are considering investments on both sides of the border. Annie Tselikis, executive director of the Maine Lobster Dealers’ Association, fears an uneven playing field in the EU market will cause investment to go to Canadian processing at the expense of U.S. processing.

“A lot of lobster (businesses) here are going to make additional investments in Canada,” Tselikis said.  “That’s 100 percent going to happen. It is already happening.”

In recent years, there had been a growing sense of public distrust against free trade deals, and the Pew Research Center found that just 45 percent of those polled had a positive opinion toward such deals by the end of the 2016 election. During the 2016 campaign, then-candidate Donald Trump said he wished to renegotiate those deals to force concessions favorable to the U.S.

Lobster industry stakeholders fear this trade imbalance may be hard to correct now that it has occurred. The U.S had been in talks with the EU on a trade deal similar to the one the EU struck with Canada, but that deal has effectively been put on ice by the Trump administration, which has also signaled it may pull out of the existing South Korea trade deal.

Even if there were political will to restart negotiations, Tselikis said she heard from U.S. trade officials that EU trade officials will be too busy negotiating Brexit in the coming months.

It’s too early to tell what ultimately will happen as a result of CETA, and industry stakeholders still strike notes of cautious optimism. Tselikis said Maine’s congressional delegation and Gov. Paul LePage are engaged and working to find solutions. Irvine of the Lobster Council of Canada hopes the trade deal will bring a rising tide to lift all boats.

Matt Jacobson, executive director of the Maine Lobster Marketing Collaborative, points out that since there is only so much lobster landed each year, U.S. buyers may be able to sell lobster to customers missing out on Canadian lobster because of CETA. Jacobson also noted that there has been much effort invested in recent years towards strengthening the domestic market for Maine lobster, and that effort may pay off at times when U.S. lobster is shut out of a foreign market. 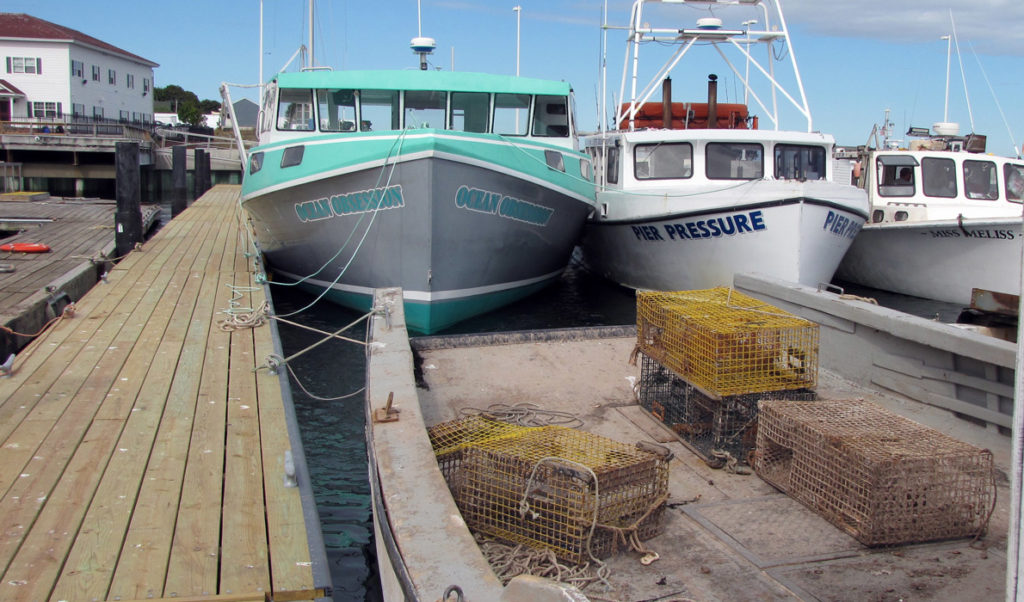 Lobster boats docked inside Eastport’s breakwater. Lobstermen throughout Maine now face a trade hurdle their Canadian counterparts do not.