I drive to work in Rockland each day by darting onto the one-way Main Street and then making a quick right turn onto Winter Street, which leads to a municipal parking lot.

Earlier this year, my routine changed for several weeks, as Winter Street was closed for sidewalk work. The asphalt sidewalk on one side of the short street was replaced with bricks and a granite curb, and a similar sidewalk was added to the other side of the street.

As I write in mid-July, the work is pretty much done. The results are beautiful.

The walking surface is made of individual gray bricks—and I know they are individual bricks, and not stamped concrete, because I watched the workers carefully lay them in a stone-dust bed. The granite curb continues across the entrance to the parking lot, but its profile is lower, so cars can drive over it and into the lot.

A similar project was completed on Tillson Avenue, the street north of Winter, a couple of years ago.

Now, if you’ve ever attended or watched a city council budget meeting, you know that something as mundane as sidewalk construction can spark debate. I’ve done my time at such meetings, and the sidewalk construction line in the municipal budget may total under $100,000—a fraction of what it costs to plow city streets—but the “wheres,” “whens” and most significantly, the “whys” can reveal political fault lines.

Older councilors remember the pre-1980s days, when towns rolled out asphalt on only the main pedestrian thoroughfares. Councilors who represent neighborhoods outside the downtown may wonder whether their constituents are footing the bill for amenities that don’t benefit them. And still others, with deep-seated Yankee frugality, may believe sidewalks should be few, and rebuilt only when absolutely necessary.

Fiscal responsibility and an equitable distribution of assets are important considerations in a community, but the “why” question—as in, why does the sidewalk have to have expensive granite curbing?—is probably most difficult to defend.

My armchair historian’s take on Maine is that it was essentially in an economic depressed state from 1930 until 1980. Fifty years is a long time, but if you think about it, most of the bones of our downtowns—picture Bath, Rockland, Belfast, Ellsworth, Machias, and Eastport—were built in the mid- to late-19thcentury.

And let’s think about those bones. Just look at the court houses and city halls—soaring cupolas, 20-foot high ceilings, intricate brick work. Not practical, and certainly not necessary, but they impose a kind of value system on citizens, suggesting that we take the institutions they represent seriously.

In other words, our predecessors saw the value of investing in their downtowns. (Although I’ve read about residents fighting city hall back then to build more wooden crosswalks to provide clean passage across muddy, gravel roads, so maybe pedestrians have always had to fight for attention.)

Now back to Winter Street.

The new sidewalks lead to the relatively new Center for Maine Contemporary Art, an architectural statement in itself, which features a sort of plaza with sculpture. And if you were attending an evening show at The Strand, a nonprofit theater on Main Street, you might park where I park and walk there on those sidewalks.

The new sidewalks also lead toward a few undeveloped properties the city expects to see interest in soon, perhaps from hotel or retail developers.

Jane Lafleur, a longtime supporter of strong downtowns, who is my go-to source on such matters, says:

“A walkable community increases business and property values, promotes community identity, and builds a stronger economy. A safe, walkable downtown brings people to the community to shop, sightsee, recreate, experience the place, and learn about its history. It’s all tied together.” 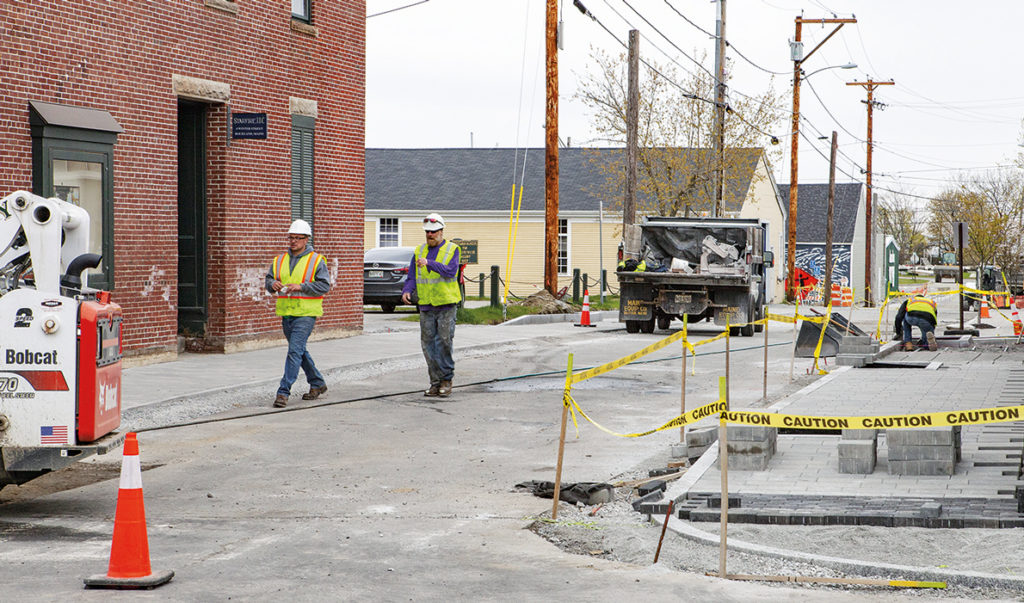 Sidewalk work on Winter Street in Rockland this spring.