Last month a perfect snow fell. It wasn’t dry as dust but neither was it slush. It had just enough togetherness to respond perfectly to an effort by three youngsters to roll it into a big ball, a ball so big that Dad had to help move the eventual globe, nearly three feet in diameter, into the place prepared for it, a level piece of ground, swept clear of snow and surrounded by evergreens.

This would be the bottom third of a considerable snowman. The kids found the mid-section, about two feet across, much easier to gather together but they did need help getting it up and installed atop the base. The head was assembled quickly, but they took their time sculpting it into a more authentic oval before securing it in place and then experimenting with the assembled elements they’d brought along to create the components of face and expression.

A wide range of opinion revolved around this critical stage of creation, all of it remarkably civil, and so quickly was compromise reached that I was left wondering if they hadn’t all ought to be sent to Washington.

The snowman’s eyebrows were compelling, each a little maple twig, the left arching inquiringly, the other contemplative and restrained. The nose, after much experimentation with numerous fruits and vegetables, sticks, a light bulb, several rocks and—I think—a piece of coal, was accomplished to everyone’s satisfaction with a fingerling potato and then a much more considered deliberation was undertaken to settle on a mouth.

First a boy installed a pair of twigs, one for the lower lip, the other—twisted downward—for the upper. They stood back to consider and Frosty smirked back at them. The sticks were removed and a bagel took its place. The open round mouth, agape, combined with the inquiring eyebrows to create a startled expression. An open mussel shell, a lobster claw, and something that looked like a piece of stove gasket or maybe rope, were tried and ultimately the bagel prevailed.

I watched and wondered why they hadn’t attached arms while they were on their way up and then marveled at their foresight in waiting till the stunned expression was settled and accomplished before they installed arms that gestured in a way that complimented the open mouth and aghast expression.

They tried on several hats, a derby, a fedora—top hat—and finally settled on a sou’wester but only till later in the day when they all returned and re-fitted him with the derby. Dad produced a corncob pipe that was poked in at a very jaunty angle.

They all stood back to admire their work and well they might. The substantial fellow stood over six feet and was quite a presence. Pedestrians stopped to admire him and drivers slowed to look.

The next day it warmed a little and, while not enough for significant melting, did cause him to lean a little to starboard. That and his inquisitive expression combined to make him look more than a little mischievous. The mildness continued and the next day he looked even more so, leaning further to the right. On the third day, he’d bent quite far over and seemed to be leaning on his right arm for support.

On his last day here with us, a young woman in a skirt walked by on her way to the library. The snowman was bent so far over that he seemed to be trying to see more of her than had been revealed. That effort apparently unsuccessful, he collapsed later that night—no doubt in frustration. 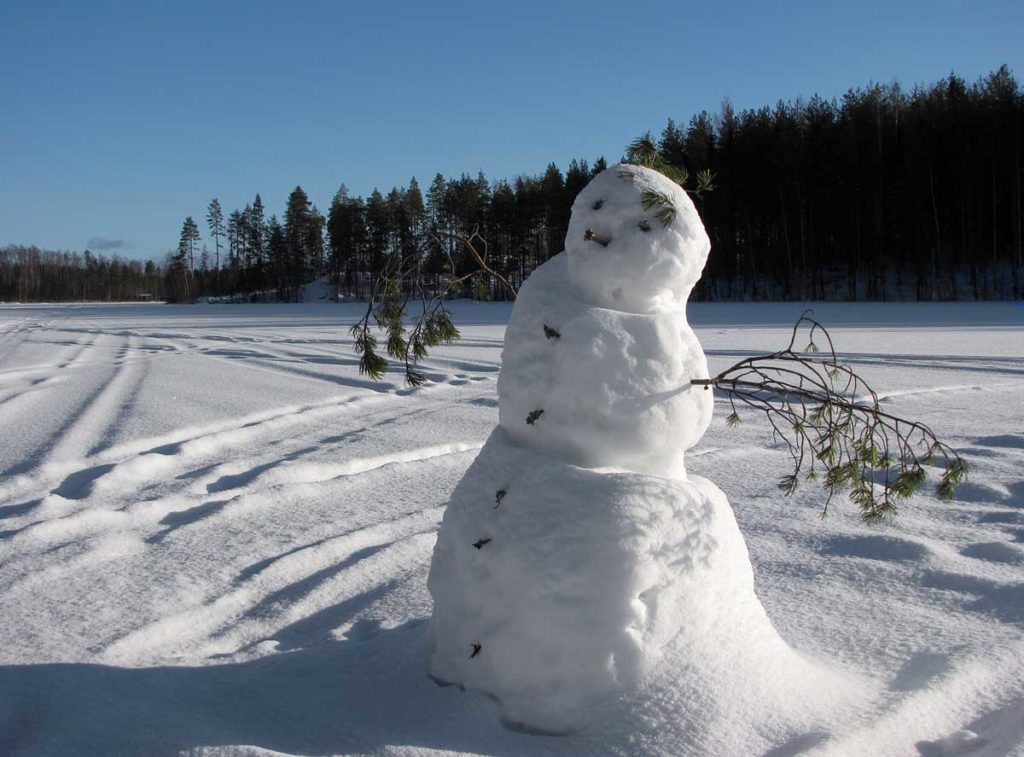