Boothbay Harbor is one of those charming towns that require intention to get there, ten miles down a peninsula bracketed by rivers and heralded oceanside.

A distinctive characteristic is the instant feel of history in its spaghetti-like network of narrow lanes close to shore and the vintage homes that preside over them.

The essence of maritime history, in particular, resonates between the area’s lively shipbuilding past and today’s robust boatbuilding scene. Commercial and recreational boatbuilding have thrived during the region’s nearly 300 years of permanent settlement; when naval vessels were built for World Wars I and II, and the Korean War, Boothbay shipbuilders were in demand at seaports all over New England, according to the Boothbay Region Historical Society.

The tradition continues today, with the industry producing a diverse portfolio. At the heart of the shoreline, for example, the Boothbay Harbor Shipyard, owned by Terry McClinch and managed by Eric Graves, is central to the village’s history. Founded as a marine railway in 1869, it produced four-masted schooners in the early 1900s and, as Sample’s Shipyard in the 1940s, vessels for the war effort.

The crew today restores notable boats such as a century-old NY-30 and Hull No. 1 by Nathaniel Herreshoff, and built a replica of the Jamestown settlement ship Discovery. Many buildings are as historic as the boats—cavernous, redolent of old beams, Frank Sample’s nameplate on the wall, original hand-cranked ship saws still used to carve ship timbers—while marine railways, wharfs and the like are up-to-date.

Recently, Graves and his employees were waiting out a spate of snowstorms to receive the 156-foot Ernestina-Morrissey—an Essex, Mass., fishing schooner, built in 1894, that went on to become an Arctic expedition boat—for a $6 million, multi-year restoration. Graves relishes such projects. Because the yard is on the summer tourist stroll through town, the work is a living-history attraction.

“People love seeing this here,” Graves said. “We’ll set up a catwalk and a viewing area up in the parking lot so people can come every day. We get a few hundred people a day who come and watch us.”

Traveling a short way down the road to Hodgdon Yachts in East Boothbay is like going from one century to another. Hodgdon is a leader in the use of the latest composite materials transferred from the aerospace industry. This yard’s history also goes back to the 19th century, when Caleb Hodgdon launched a pinky schooner; four generations built about 400 work and pleasure boats.

As the nation’s oldest family run boatbuilding firm, according to company information, it’s now run by fifth-generation son Timothy Hodgdon. It was he who pushed to diversify at other locations, offering other services.

For more than 20 years, the yard has produced superyachts such as Antonisa, the 124-foot sloop equipped with a custom pipe organ and functioning fireplace. In September, the yard launched the super-sleek hundred-foot Comanche, built from pre-preg carbon fiber (structural fabric pre-impregnated with resin, frozen for shipping, laid up in a mold, then heated to catalyze the resin) in the biggest marine oven in the United States, “almost a building within a building,” says marketing director Ed Roberts, who points to the moveable panels that form the oven’s walls and roof.

Between the infrastructure, experience and knowledge in doing advanced composites, “There’s probably only half a dozen yards in the world that could have done a project like Comanche,” Roberts says.

Next-door, Washburn & Doughty Associates, founded in 1977 and specialists in steel and aluminum commercial vessel construction, today focuses on tugboats, having cornered an East Coast market share of about 35 percent. Hull No. 111, designed in-house, was recently launched; several are on the line, and further contracts take work into 2017.

“We view ourselves as part of the legacy of shipbuilding in this area,” says Matt Maddox, vice president of finance. “We take a lot of pride in that.”

Elsewhere, along winding back roads, smaller yards include longstanding, family-run businesses such as the three-generation Paul E. Luke’s, and Blake’s Boat Yard, founded in the 1950s. David Stimson, building for 40 years, and his son Nathaniel specialize in design and construction of wooden boats such as classic Amesbury skiffs. Matt Sledge, with decades of experience using various materials, opened Samoset Boatworks in recent years and built a cold-molded “gentleman’s day boat” with curvy ornamentation on the sheltertop.

Mike Mayne founded Edgecomb Boat Works 30 years ago to restore all types of wooden classics, from schooners to skiffs. “There’s a lot of talent on this peninsula,” says Mayne. Boothbay Harbor was once pigeonholed as a T-shirt/trinket stop, he says. “That’s changing. The art world has really grown. That’s helped a lot. And there are probably eight or 10 outstanding boat businesses on this peninsula.”

Named above are just a few of the region’s boatbuilders, restorers and marine-related businesses. Yards small and large have always been important to the region, no less today than in the 1600s, says Lincoln County Regional Planning Commission executive director Mary Ellen Barnes.

“People have grown up learning how to build ships and make parts,” she says. A key strength of today’s industry, she says, is not only the diversity between yards, but within them. That allowed many to get through a recession that saw fishermen put off upgrades, yachters waiting to buy, and even the tug market slowing. Hodgdon, for example, today employing 150 people and producing one new yacht every other year, copes with the industry’s zigzags by shifting people between divisions.

“We’ve made a concerted effort to smooth out the labor demands of the business by diversifying the company,” Roberts says.

“There’s often turnover, as there is throughout the boat industry,” she says. “But the companies that put money into training—whether it’s welding or sailmaking or engineering—have provided a great, multifaceted employment sector, and it spills over into the smaller businesses. The highly skilled workforce they’ve sustained, and are always looking to make better, is a key contribution to the economy.”

With coastal real estate prices sky-high, many employees commute to work from the surrounding inland areas, some traveling an hour.

“In Maine,” says Roberts, “a lot of boatbuilders are located at the end of peninsulas, but many working people cannot afford to live there anymore. So it is a real problem in terms of drawing labor.”

So larger firms work to hold onto their people by providing training and advancement opportunities, and consistent employment. “We don’t play the layoff/callback game,” says Maddox.

It’s an issue for the general population. Barnes says town planners are looking at affordable housing solutions, so young families can live in the area and take local jobs.

“We’d love to have more of that,” he says. “Anytime a regional boatyard publicizes or is noted for the work they’ve done, people take tremendous pride. It’s something that is representative of the area. It’s who they are. 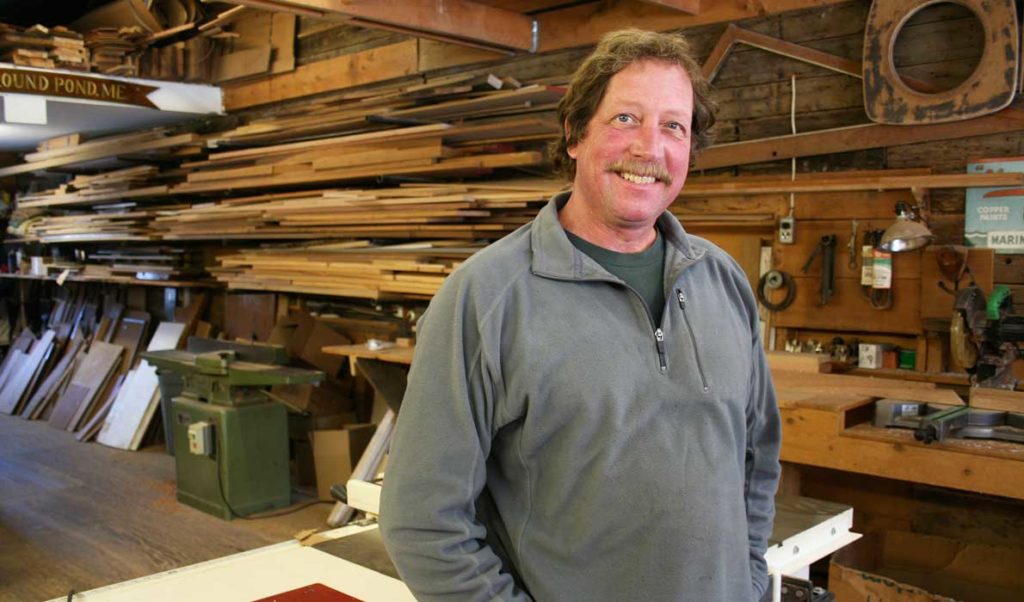