Those of us who endured the Ice Storm of 1998, which knocked out power for days and even weeks for many, take a certain pride in having survived the ordeal. All other extended power outages were measured against that mother of “inconveniences,” as former (Belfast) Republican Journal columnist Doug Hufnagel put it back then, comparing it to the actual disaster of an earthquake he had lived through in Central America years before.

But no more. The south winds, raging as high as 60 mph, that swept over the state on Oct. 30, left more Mainers without electricity than ever before, according to both Central Maine Power and Emera Maine, the utility transmission companies that deliver power to much of the state.

The Maine Legislature’s Energy, Utilities, and Technology Committee will “consider aggressive tree cutting, underground power lines, and other measures in response to a storm that left some homes and businesses in the dark for up to ten days,” the Portland Press Herald reported.

A spokesman for CMP said its crews “restored power in less than half the time it took during the 1998 ice storm, when there were fewer outages,” the paper reported, but unlike that January storm and the slippery, hazardous conditions in which linemen worked, the late October storm was followed by mild, mostly clear days.

“It’s likely that we’ll get more storms like this,” Rep. Seth Berry, co-chairman of the committee told the Press Herald. “Sixty-five to 70 miles per hour isn’t all that fast,” he said, referring to a wind gust of 69 mph recorded in Portland. “What are we going to do when it’s 110 mph?”

The storm itself was described by the Bangor Daily News as “an unusual meteorological event sometimes referred to as a ‘bomb cyclone,’” or “sharknado,” in which the atmospheric pressure drops precipitously.

Belfast saw a handful of boats break loose and wreck on the shore; one vessel was driven upriver and its topside sheared off by the city’s footbridge.

Speaking of wrecks, the Bangor Daily News reports on a team of divers finding the remains, in 300 feet of water, of the SS William H. Machen, which sank on July 7, 1942 off the coast of Maine and New Hampshire. The Machen collided with another ship, but the other vessel made it to port.

The ship’s 34 crew members, “17 of whom were New England natives, safely abandoned ship in lifeboats and were rescued by the Coast Guard,” according to the story.

We don’t typically peruse the United Kingdom’s The Guardian newspaper, but a story about Scotland’s government officials blocking the sale of an island in the Hebrides was flagged for us.

“Islanders on Mull will launch a worldwide appeal to help buy the tiny Hebridean island of Ulva,” after its owner sought to sell it. “The appeal is likely to include Australians whose forebears left Ulva … which resulted in its population plummeting from about 600 people two centuries ago to just six.”

The 4,600-acre island is accessed by a short ferry ride.

“It’s just such a lovely place to bring up children,” said a resident. “We have such an excellent primary school … and the children have a freedom that they wouldn’t get elsewhere.”

The Mount Desert Islander featured an interesting story about a memoir written by William C. Holden III about his time living on Mark Island.

“During his years on the island, Holden poured his energy (and money) into restoring the lighthouse, lighthouse keeper’s house, workshop, oil house, henhouse, outhouse, boathouse, ways and pier,” the paper reported. “He also read, cooked, painted, and even lazed around a bit. All was recorded in a daily diary kept most days.”

A report made to a Portland city committee on the vulnerability of the Bayside region “estimates the neighborhood between Back Cove and Forest, Cumberland and Washington avenues could experience sea level increase of 2-6 feet by 2100,” the Forecaster newspaper reports.

“Sea level increases could also affect the harbor side of the peninsula along Commercial Street,” the story continued. The city’s waterfront coordinator Bill Needelman said “Bayside is the more vulnerable area because it is lower than Commercial Street.”

Before 1870, the neighborhood was largely under water. “Debris from the 1866 fire that ravaged the city’s peninsula became fill that extended land into Back Cove, with more fill extending the shoreline in 1900 and 1940,” the Forecaster wrote. 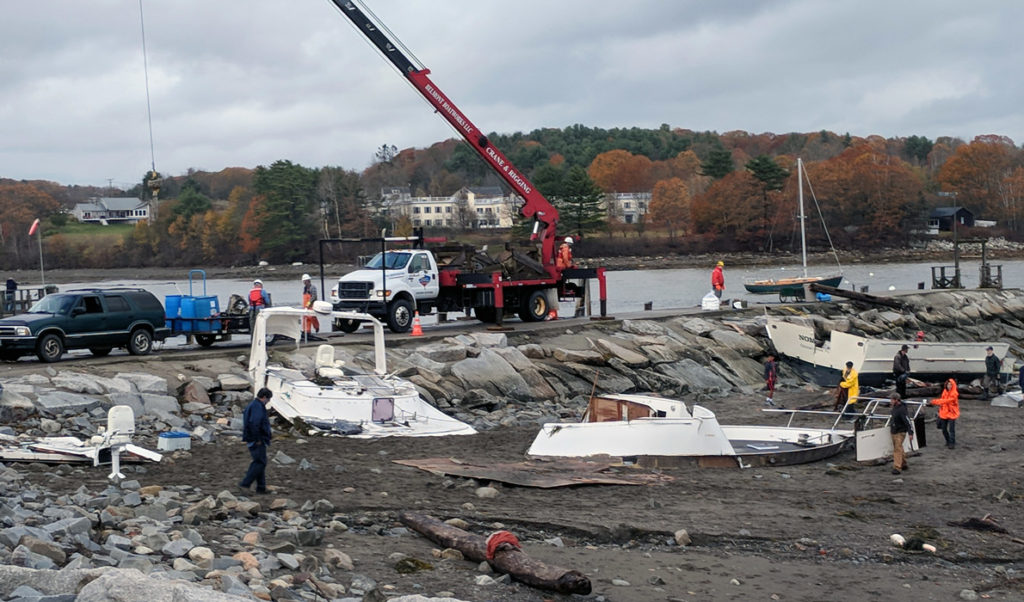 The remnants of boats destroyed during the Oct. 30 storm washed ashore near Belfast's breakwater.