As I sat at my kitchen table attempting to pull something out of my overloaded-by-too-much-to-do brain for this column, I gazed out through the window, taking in the lilac bush where the blossoms were just opening. Birds were flying back and forth between the bush and the bird feeder. I thought to myself, “Well, you could write about birds, or you could write about windows…”

It didn’t seem all that helpful a thought until I finally buckled down to work after many distracting games of TextTwist and several turns at Words With Friends. It turns out that birds and windows are somewhat of a theme.

I have early memories of my mother saying, “Look! What kind of bird is that?” and then sitting with her while she pulled out her blue and teal copy of Roger Tory Peterson’s A Field Guide to the Birds. We would match the drawings to what we were seeing and pat ourselves on the back for making a correct identification of a new bird.

In mid May, Bruce came up to my studio with this same bird book to see if we could determine what kind of bird he had seen fluttering against the window, where he usually sits in our kitchen. He knew it had yellow on its breast and was grayish blue on top. The little guy would go from the kitchen window to the sliding glass door in our living room, looking in as it fluttered gently against the glass.

I couldn’t make an identification from Bruce’s description, but a few hours later, as I was working at my jewelry bench, I heard a slight scratch and flutter at my upstairs studio window. A northern parula warbler appeared to be looking in as I worked. It was the same bird Bruce had seen.

There must be something about the light at this time of year that makes our southwest facing windows an attractive mirror for the birds. Earlier this spring, some kind of hawk spent time at our dining room window, but he was gone before I could identify him. Last year we had a persistent goldfinch that spent more than a week going after his own reflection. Two years before we had a junco who liked to tap away at his image in the same window. I imagined he was doing this to remind me to fill the feeder.

A day after the parula warbler stopped visiting, I heard a heavier fluttering. It was a rose-breasted grosbeak, the only one I’ve seen all spring. How odd that he was not at my feeder, but at the window, instead. I know he was being territorial, but I like to imagine it as avian curiosity about our human world. Couldn’t our windows be their version of television?

My favorite bird is the great blue heron. How I wish I had been at Jim and Sallye Parrish’s house last week when one came up against their window with his beak wide open. He was not hurt, just disoriented, and eventually flew off. I would like to have witnessed this close encounter with such a magnificent bird.

Much as I like the idea of taking long walks around our beautiful island, wearing binoculars and carrying a bird book, I rarely do it. Spring is such a busy time of year, it is easy to find activities that seem more important at the time. (It might be good to rethink my priorities on this as far as stress management goes.)

Despite the preening visitors at our dining room window, most of the bird activity I experience comes from looking through the kitchen window that is right over my sink, where I have a good view of the bird feeder at the edge of the yard. Fortunately, in the Cranberry Isles, we do not have squirrels, so those of us who fill feeders regularly appreciate that we are not wasting money to feed bushy tailed rodents.

Through my kitchen window every spring, I watch the returning cardinals who nest in the nearby woods. Did you know that male cardinals will often pick up a seed and hop over to feed it to a female cardinal? I’ve seen it many times.

I remember once going bird watching with my sister-in-law Karen, having seen a variety of birds, yet still missing the sight of a black-throated blue warbler. An hour later I happened to be looking out the window at our woodpile and there was the bird I’d been hoping to see. Among the birds I’ve seen for the first time through my windows are the Carolina wren, indigo bunting, chestnut sided warbler, sharp shinned hawk, oven bird, yellow breasted chat, redstart, Baltimore oriole, pileated woodpecker, red bellied woodpecker and yellow bellied sapsucker. How do I remember? I write in my bird book, next to their pictures, the date and location of my sighting.

You really can experience “birding” without leaving home. All you need is a book, a window and the willingness to look out. 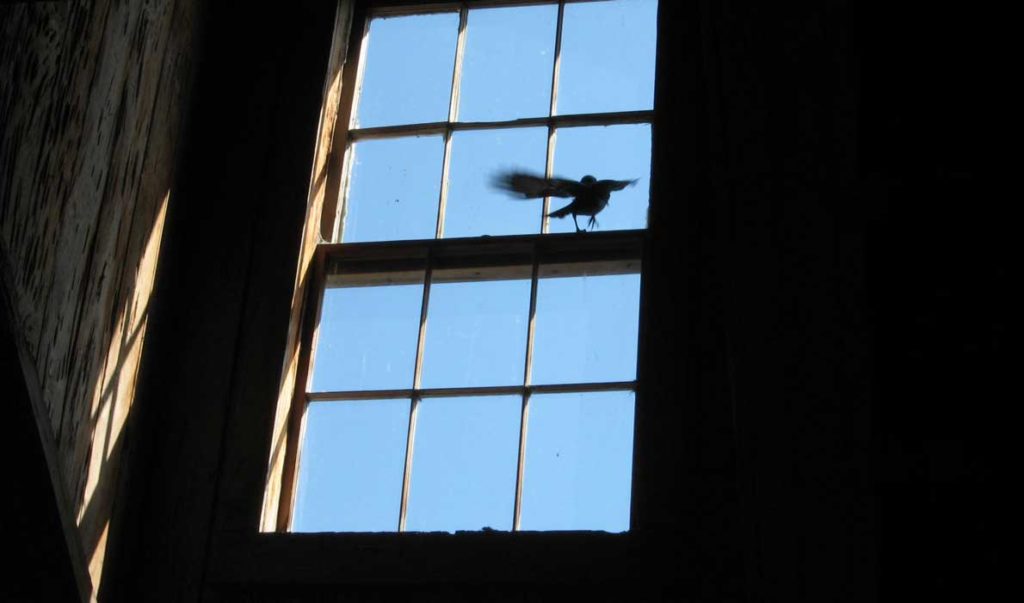