“Housing is absolutely essential to human flourishing. Without stable shelter, it all falls apart.”

Architect Jeri D. W. Spurling has dedicated her professional life to serving those in need. In fact, the motto of Spurling Design, based in her home on Islesford in the Cranberry Isles, is “Making Good Architecture Attainable for All.”

Although she will happily take on additions and renovations for public buildings and other projects, Spurling’s real love is helping people, leaning on the skills she first developed at Carnegie Mellon and has since honed working on projects in Boston, Connecticut, and Maine.

“I have had a rich and happy life because I’m not always worrying about myself,” she said.

A current labor of love is a campus she is designing in the Dominican Republic that includes a church, a school for 426 Haitian children, a dormitory and, in the future, a clinic. Spurling has been traveling to the DR every year since 2003 with a construction team.

“That work is closer to my vision,” she said. “We slowly build it as we get the money.”

The motivation to serve others also led her to get in touch with Maine Seacoast Mission, which, in collaboration with Downeast Community Partners (DCP), C. F. Adams Charitable Trust, and Assabet Regional Technical High School in Marlborough, Mass., is building a 560-square-foot home for a military veteran.

Assabet Regional Technical High School has a program called “Learn and Serve” for its students, and the entire tiny house, inside and out, is being built by ninth- and tenth-graders. Delivery to a site owned by the veteran in Cherryfield is expected in October.

“We had someone who came to our attention who was 90 percent disabled and homeless at the time,” said DCP Housing Director Bobbi Ann Harris of the veteran who wishes to remain anonymous.

The U.S. Interagency Council on Homelessness reports that there are an estimated 119 homeless veterans in Maine. 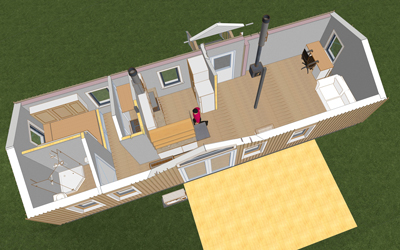 Spurling is donating her time designing the home and said she was attracted to the project because of her interest in homes that allow the elderly to age in place—a need made evident by her own aging parents on the West Coast.

“I see their needs,” she said. “I approached Scott Shaw knowing Maine Seacoast Mission is doing a certain similar thing.”

Shaw, who manages housing rehabilitation for Maine Seacoast Mission, said students from Assabet have been coming to Maine every spring for seven years to help rehabilitate homes for the needy.

“They helped gut the first one. While we were doing that, Bill Italiano,” the lead carpentry teacher at the school, “and I talked about the possibility of his students building a home one day and bringing it up to Maine,” Shaw said.

“Jeri called and asked if I needed an architect for our housing rehabilitation program,” Shaw said. “We didn’t have a need, but I mentioned the tiny house project and said I would be in touch if we ever got funded.”

A year ago, that funding came via the C.F. Adams Charitable Trust, which had been helping with the housing rehabilitation projects. Trustees of the philanthropic trust were impressed with the tiny house project and the number of collaborators.

“Donations of materials from local contractors supplement the funds provided by the trust,” said Janet Taylor, an advisor to the trust. “The support from the local community will assure that the project succeeds,” she added, and noted that as a pilot project, it “can serve as a prototype for creating more tiny houses to serve veterans and the elderly in the Downeast region.”

DCP is handling all of the paperwork, which includes transfer of a forgivable loan. Eventually, the home will belong to the veteran.

“The veteran was couch surfing with another veteran,” Shaw said, but now is buying a parcel of land in Cherryfield. “He was going to be responsible for the well, septic, power, and grounds work. Once things got going, all of a sudden everyone wants to do everything free for him.”

Not only are Maine companies doing the work at no cost (a full list of sponsors is at www.downeastmaine-tinyhouseproject.com​, a blog about the project), but the high school is receiving donated materials as well.

“The amount of community support is amazing,” said Shaw.

The current plan calls for a space that is 580-square feet, every square foot designed to meet the veteran’s specific needs. Spurling said the man wanted an open living room and dining area for him and his two dogs; a bedroom just big enough to hold a queen bed; and storage tucked away across the hallway from the bedroom.

The main room has a fold down dining table and a small office area.

Originally, Spurling designed an entryway, but the owner decided against it so that the front door opens directly into the living space.

Spurling’s approach is to have the homeowner fill out a questionnaire. Based on what she learns, she can then come back with a design she believes is tailored for the client, instead of offering several generic options.

She does not encourage clients to include photos of what they envision, preferring words to begin with until she has a sense of the “feeling” they want.

“My design is always people centered. What do they need to support their activities?” drives her work.

Once this home is completed, the plan is to build a tiny house community for veterans and the elderly, possibly in Machias where they would be close to public transportation and the services they need.

“There is not enough affordable housing for the elderly,” Shaw said. “These houses are efficient. They don’t cost much. And it gives people a sense of community and dignity.” 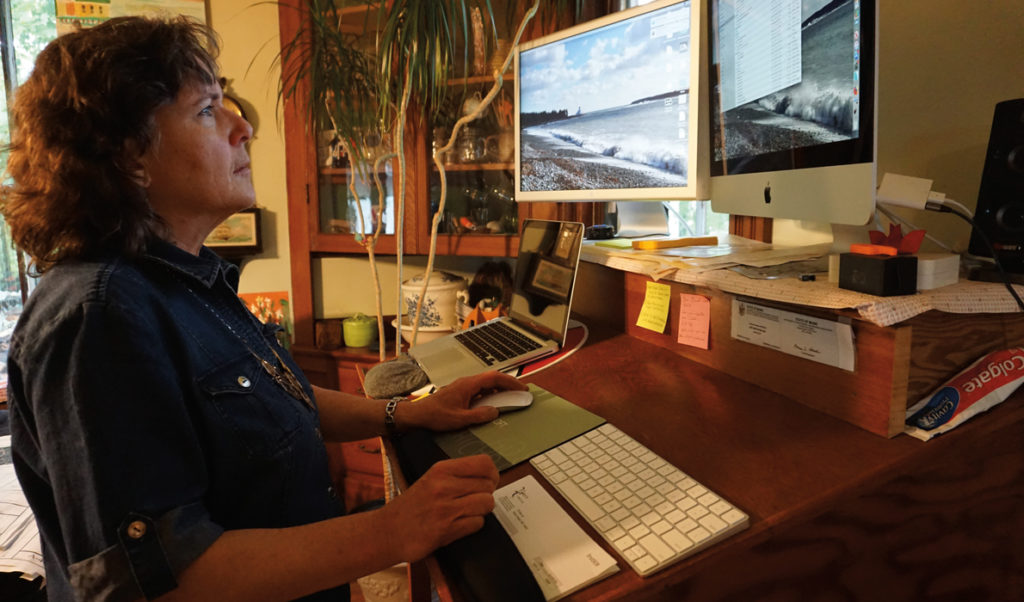