This is the first in a series of stories about coastal towns facing challenges.

Most towns would boast about hosting a college, and Biddeford is no different in its pride in having the University of New England within its borders. After all, being a college town brings a certain amount of culture and entertainment. Status follows having a seat of higher learning in the community. And, perhaps most enviable, students bring a lively, youthful energy.

For Biddeford and UNE, though, the sentiment was not reciprocal. In fact, says Delilah Poupore, executive director of the Heart of Biddeford, a small nonprofit that works to boost the city’s downtown, students were warned away at their orientation.

Campus security officials told incoming students to avoid being downtown after dark. If they did venture into town, they should wear steel-toed shoes as protection against hypodermic needles that might be lying on the sidewalk.

But since reputation usually lags behind reality, Poupore and her organization took on this undesirable image head-on. Two years ago, they hosted a block party downtown for all 700 first-year students. This school year, Heart of Biddeford created 26 opportunities around town for students to fulfill their required community service.

It’s just one story in a remarkable transformation, one that seemed unlikely even a decade ago. But Biddeford has, in a phrase coined by one local observer, undergone not only a renaissance, but a “Biddesance.” 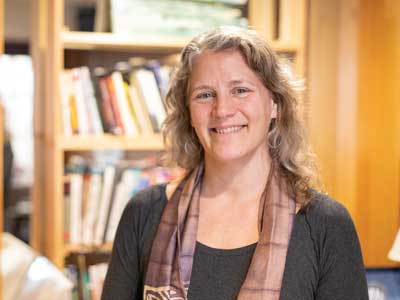 Delilah Poupore, director of the Heart of Biddeford organization.

Another phrase local leaders use in describing the new Biddeford is Brooklyn North, because, in fact, several entrepreneurs have come to this Maine town directly from that New York City borough, and because its core has a dense, urban feel. Yet this community of 21,500 is still a place where residents wave to each other on the street, and it boasts of having the lowest median age—35—in the state.

Community leaders point to a few key elements that helped turn the town around. One turning point came when a dominant business was shut-down and demolished. Another was seeing large, 19th century industrial buildings not as a liability, but as an asset. A third was celebrating the city’s cultural heritage, not running from it. Municipal investment also was key. And lastly, a concerted effort was made to fan the flames of community pride.

When Biddeford High School basketball teams played other schools, they caught the brunt of trash talk—quite literally. Students from other schools would denigrate Biddeford for being home to the Maine Energy Recovery Company—MERC—incinerator. The large facility, which burned municipal waste to fire turbines to make electricity, was the city’s dominant, if noisy and smelly, employer and tax base.

Alan Casavant, now the city’s mayor, has seen the arc of a 20th century industry in the MERC facility. A history teacher in the high school, now retired, he served on the city council while in his 20s when the plant opened in 1988.

“It contributed significant tax dollars to the community,” he said, but it didn’t perform well and, yes, “the stink from the garbage” hauled in from the region hung over the downtown. “Biddeford was called ‘trash town.’”

Still, Casavant admits the city council’s decision to purchase, close, and demolish the plant “was gutsy.” MERC employed 80 people in good-paying jobs and was the biggest taxpayer.

In 2012, following a community meeting at the City Theater on Main Street, the council voted 8-1 to purchase and demolish the plant. It was a tough sell in the dark days of the Great Recession, but the mayor notes that all the councilors who voted in favor of ending MERC’s reign were reelected.

“We were dead-on,” he says of the decision. “Except the speed. (The transformation) was much more rapid than we expected. What’s been happening here is a rebirth,” he said. “Not just the reinvestment, but the community pride.” Promotional materials once referred to Biddeford as being “in the Portland area.” Now, boosters are proud to utter the city’s name.

It took more than trashing MERC, though. Casavant says to lure new investors downtown, the city had to be a reliable investor itself.

“In terms of attracting investment dollars, you have to invest yourself,” he said, and the city installed new street lighting, sidewalks, cobblestones, and even brought in flowers, “to add color to our incredible architecture.”

A river walk, with a $1 million public investment, will be completed, linking existing legs. Such municipal investment signals the city is serious in building public-private partnerships, the mayor said.

Stroll or drive through downtown, and Biddeford’s 19th century history and its 21st calling card command your attention. Fortress-like brick mills tower over the streets, some 1 million-square-feet in all, spread across several buildings owned by several investors. The Saco River winds around and through this brick canyon.

As Poupore of Heart of Biddeford points out, parts of the textile mill complex were still operating a dozen years ago, and so the community is in the enviable position of having substantial, attractive, and well-maintained infrastructure. 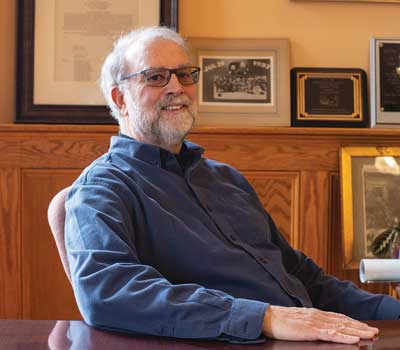 Casavant is proud to be a native of Biddeford, and proud of his French heritage, an ethnic group that helped run the textile mills that made the city hum in the 19th century. And yet, as he is quick to point out, it was also Greek, Italian, and Irish immigrants who helped build the mills and do other work. Some of the first mosques were in the mills, too, further reflecting the international flavor it brought to Biddeford’s beginnings.

“The French were the last big wave,” he said.

The city’s La Kermesse festival, begun in the 1980s to celebrate its Franco heritage, may have begun to fade away, as younger people don’t identify as closely with their ethnicity. But the mayor and others came to believe the event should remain and be valued, and it is a centerpiece as a community celebration.

Not only does Biddeford have the lowest median age in Maine at 35, but its downtown has a median age of 29. Of course, Casavant jokes, he and the reporter have together nudged that number up, meeting in city hall. Post-trash incinerator, Biddeford has “what the younger people want. It’s an attractive place for them. They don’t need a car,” with pubs, restaurants, and coffee shops all downtown. And they don’t have to go to Portland to find those amenities.

Katie Pinard and her business partner Michael Macomber own and operate Elements, a combination coffee shop, pub, and bookstore, which serves breakfast and lunch, launched in 2013. She grew up in town, and he grew up across the river in Saco. Both left for college, experienced urban life, and separately came back to Maine.

“We’ve really seen the lifecycle of both downtown communities,” she said, remembering Biddeford’s thriving commercial district when she was a child in the 1980s. 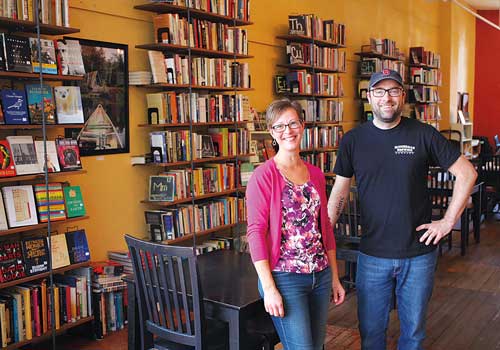 Katie Pinard and Michael Macomber are locals who returned to the area to operate Elements.

Macomber, who was teaching at UNE, responded to a business plan contest more as an exercise than a serious bid, Pinard explained, but when it began to come together, he decided to take the plunge.

She, too, has heard the stories about UNE’s fears about the downtown. Now, most of the staff at Elements are students, and customers include undergrads, graduate students, and faculty.

The components she believes fueled the revival are the Heart of Biddeford, an arts organization called Engine, the City Theater, and entrepreneurs.

“There’s been a remarkable transformation,” with Biddeford becoming “an up and coming food and beverage hub. I feel good about it as someone who’s from here.”

Poupore joined Heart of Biddeford in 2011, moving to town from Minnesota. The organization was established by a $150,000 “community heart and soul” grant from the Orton Foundation, and now operates on a lean $100,000 annual budget.

The organization hosted 33 public meetings and events and created a master plan, 80 percent of which has been completed, she said. The community work paid off.

“When we were getting rid of MERC, we were able to say to city council that 350 people came to meetings and said being ‘family friendly’ was important,” Poupore said.

Heart of Biddeford established five community values for its work:

Poupore see the mills—Lincoln, River Dam, North Dam, Pepperell—unequivocally as an asset. She and her husband and child live in one, and dozens of start-ups are renting space there.

“It is a great asset for the fact that you can add jobs and add housing,” she said, noting that in other cities, additional floors must be added to accommodate growth, a costly proposition.

Casavant has been involved at city hall long enough to know the city can’t coast. Challenges loom. Though plenty of double- and triple-decker houses remain from the textile mill days, investor interest has begun to push up rents.

The city’s daily newspaper, the Journal Tribune, was shuttered in the fall. Without it, providing residents with accurate information about city initiatives has been more difficult.

The city is now in the midst of working with a developer to build a 600-space parking garage on the property where the incinerator once stood, and Casavant says some public outcry has been based on inaccurate posts on social media. The city is hiring a communications director to help fill the void left by the newspaper’s demise.

Mathew Eddy, the city’s planning director and a veteran of other municipalities, believes knowledge is critical.

“Understand your community—do a deeper dig,” he urges those wanting to replicate the city’s success. “Inventory what’s going on, who’s living there, and ask, ‘What’s your niche?’” And what about UNE and the sting of its warnings to students?

“We would love to get them into the downtown,” Eddy said. 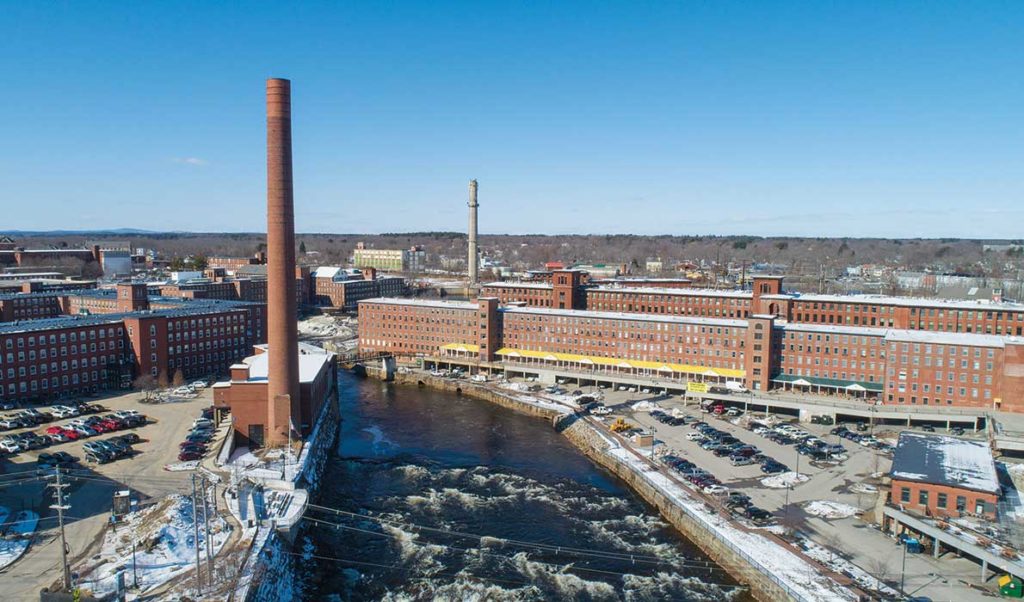 A drone view of the 1-million-square-feet of mill space in Biddeford.