There is an old saying that you can’t keep a secret on an island, but that was disproven at Chebeague Island’s town meeting on June 10, when Beverly Ross Johnson was presented a legislative sentiment by Rep. Janice Cooper. The sentiment recognized Johnson’ s 53 years contributing her time and talents to the island community.

While volunteerism is in islander DNA, Johnson has raised the bar with her varied contributions.  While most people excel at something, Beverly Johnson excels at almost everything. Her talents and life experiences range from art, theater, music, technology, athletics, politics, hiking, and bird watching to community organizing. She’s done it all.

Johnson’s presence is so much a part of the island fabric that many forget she arrived during the 1960s as a summer girl from Massachusetts. At 15, she began volunteering as a swim instructor. After her marriage to lobsterman Stephen Johnson, she moved to the island and founded the Chebeague Gymnastics Club, the Chebeague Track Club, and the Chebeague Recreation Program.  During this period Johnson worked for an engineering company, went lobstering, hand painted custom ceramics, joined the boards of several island organizations, and became a master plumber.  With this resume, it is not surprising that she was chosen to be one of Maine’s torchbearers for the 1980 Lake Placid Olympics.

She honed leadership skills as president of the Chebeague Island Hall Community Center. In 1983 she took a leap and was elected to the Cumberland Town Council (which the island was part of at that time) as a write in candidate. While serving as council chairwoman, she established a program to preserve Chebeague’s coastal access, and worked with Mabel and Sanford Doughty to facilitate the acquisition of the Doughty’s land at Chandler’s Cove for a town park. She was a founder of the Chebeague and Cumberland Land Trust.

While president of the Chebeague Transportation Company, Johnson grappled with mainland transportation issues. Chebeaguers were in danger of losing access to the island via Cousins Island, and she worked with others to make sure that did not happen. As the population increased, parking at Chebeague’s Stone Wharf became an issue. Johnson was instrumental in Cumberland’s purchase of the Sunset property, Chebeague’s last undeveloped lot with acreage and deep water, which she saw as an investment in the island’s future.

During the 1990s the Chebeague School faced significant challenges, so Johnson looked for solutions while attending retreats and supporting educational improvements. She brought her love of nature to the children of Chebeague by organizing school field trips to huts in the White Mountains.

For many years, she served as an EMT. She made posters, calendars, brochures, and newsletters for just about every island organization using her artistic talents and competence in the “new” technology, computers. It wasn’t long before she created an island website, Chebeague.org. For more than 20 years she has recorded the island’s recent history. Island organizations are linked and with a click, islanders near and far can celebrate the good news and mourn the bad.

Chebeaguers decided it was time to build a recreation center with a pool, gym, teen center, and fitness room, so Johnson became the leader of the on-island campaign. When the Museum of Chebeague History opened in 2003, the walls were covered with photographs and graphics she created, for which she was named volunteer of the year.

When a controversial liquefied natural gas facility was proposed for Casco Bay it was no surprise that Johnson helped found Save Casco Bay, a bay-wide organization that stopped the project. Her activism continued when the Chebeague Island School was threatened and Chebeague decided to secede from MSAD 51 and the town of Cumberland. She became one of the five representatives who negotiated the separation agreements and was elected to Chebeague’s first school board.

Johnson is the founder of the Chebeague School’s Tech Club, an afterschool program that teaches kids how to use all the bells and whistles of a computer. She has inspired students to learn about birds, storms, invasive plants, marine creatures, island culture and more. She organized field trips including a recent trip to Quebec City and has captured project after project with incredible YouTube videos. And how does she share all of this with the world? She cofounded Chebeague.net, an internet company, with her brother-in-law David Hill.

While Johnson was giving so much to so many, she cared for her parents and in-laws, served as a mentor to her many nephews and nieces, and raised her three children, whom she and her husband adopted from Russia. Now she is sharing her knowledge, energy, and love of community with her granddaughter.

Although she has retired from the school board, she continues to volunteer at the school and throughout the community and is on the boards of the local land trust, the hall, Recompense Foundation, and the Maine Island Coalition.

Chebeague Island is a much better place because of Beverly Johnson’s positive attitude and can-do spirit. But what is next for Beverly? It’s hard to tell, but as her husband says, “There is always a new hobby of the month when Beverly is around!” 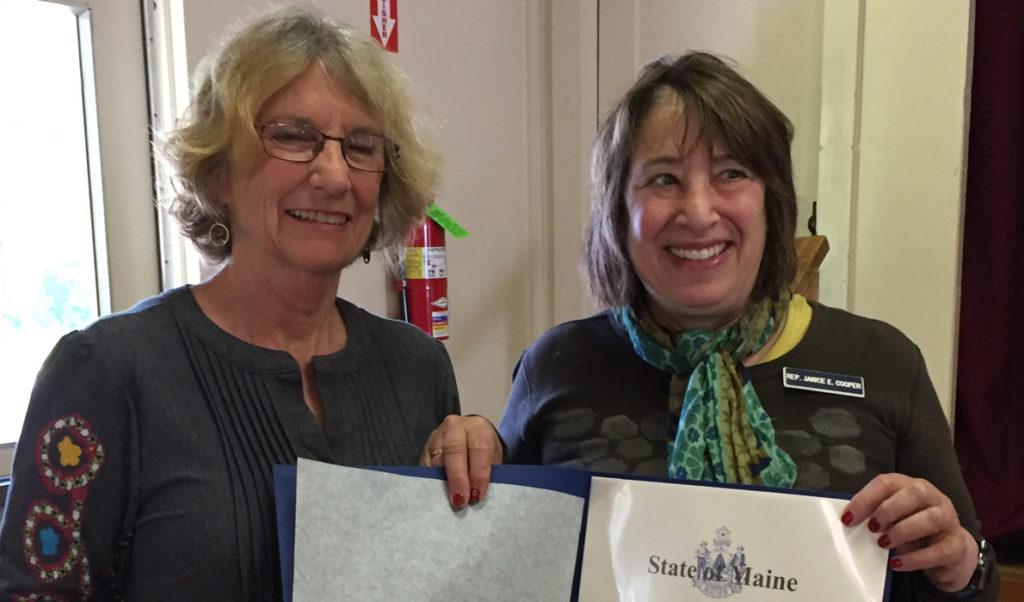 The view of Maine from the reservation