Nathaniel Philbrick, best-selling author of several books on early American history, used his low-key but direct delivery to make the audience sit up and listen during his talk at the Strand Theater in Rockland, on Friday, June 29.

They listened because he told the compelling story of Benedict Arnold, America’s favorite frame of reference for treason, and painted an intricate portrait of a complicated, brilliant character who was not alone in treachery during the tumultuous times of the American Revolution.

The personal hero of his “wonderfully iconoclastic,” pipe-smoking mother, Mary Ann, was Benedict Arnold, said Philbrick. A big fan of the historical novels of Kenneth Roberts, she would always tell her son, “You don’t know the whole story,” said Philbrick. His Arnold research led him to say, “Mom, you were right!”

Speaking as the 2018 Knox Annual Guest Lecturer, sponsored by Thomaston’s Knox Museum, Philbrick, a Nantucket resident, was introduced by his friend and colleague, Thomaston’s own maritime historian, Renny Stackpole, who shares Philbrick’s love of history, Nantucket and the sea.

Sporting short hair, glasses, and a Brooks Brothers look, the New York Times best-selling author had the right to be boring if he chose, but that’s apparently not in his repertoire. He rivetingly detailed the circuitous path of Arnold’s eventual fall with intimate, relevant, and colorful details about George Washington’s genius as a general and a politician, the young Henry Knox’s acumen with munitions that drove the British out of Boston, the invaluable assistance of the French, the ambiguity of the times, and the amazing bravery of all concerned as well as the colossal egos of some.

In Arnold’s case “It was hard to tell if his courage was to burnish his own reputation or to help others,” Philbrick said. But whichever it was, his amazing risks usually paid off.

Philbrick’s talk centered mostly on his recent book Valiant Ambition, which details the complex relationship between Washington and Arnold, and highlights Arnold’s creative moves that won unwinnable battles or at least bailed them out in brazen, unpredictable ways that worked to the advantage of the Americans.

Valiant Ambitionis the second of Philbrick’s three books about the American Revolution. The first, Bunker Hill, chronicles the start of the war and the bloody battle of the same name that marked “the point of no return” for the rebels. The third, In the Hurricane’s Eye, that leads up to the battle of Yorktown and the end of the war, will be published in October by Viking Press.

Besides winning several prestigious prizes in 2017, Valiant Ambition won the Pulitzer Prize for biography. His account of the founding of the Plymouth colony and King Philip’s War, Mayflower, was a finalist for a Pulitzer.

Director Ron Howard based his movie of the same name on Philbrick’s book In the Heart of the Sea, the story of the whaler Essex, rammed by a whale in the South Pacific in 1819 with 20 crew aboard. The vessel’s tragic tale is credited as Melville’s inspiration for Moby Dick. 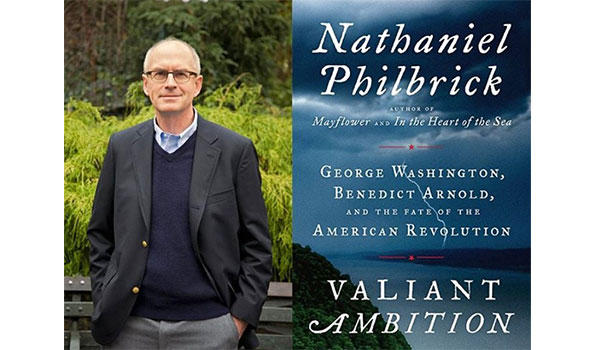