You can hear the laughter before you board the schooner, and the mouth-watering scents of bacon sizzling in butter and right-from-the-oven blueberry muffins nearly make you dizzy as you descend into chef Anna Miller’s domain—the galley of the schooner Ladona (pronounced la-doe-na).

The five-foot-tall Miller is all action: stirring butter in a pan on top of her kerosene stove with one hand, she turns her body away from the stove to gesture with her other, joking with the guests seated at the gleaming L-shaped table behind her.

As she returns her attention to the pan, she snags a couple of eggs from their cardboard crates on the counter and cracks them into the pan. Grabbing some chopped mushrooms and onions from small glass bowls to the left of the stove and tossing them in, she stirs the ingredients with a spatula. All the while answering a question from her young assistant, Abby, checking the progress of lunch—a pot of beef stew—and wiping spills and splatter with a dish towel.

It is 7:30 on an overcast and chilly June morning on the first full day of a three-night sailing cruise. Miller has been awake since 4 a.m. and will be in the kitchen nearly continuously until dinner. It is here that Miller spends most of her days. As she’ll tell you, being a chef on one of Maine’s historic cruising windjammers is a hard job, but she feels lucky to be doing it.

Cooking on a schooner is not like cooking on an electric stove in a home kitchen. Most of the historic schooners in Maine’s windjammer fleet have wood stoves, but the stove in the Ladona is a kerosene stove, built especially for sailing vessels. It has railings and bolts along the cooking top—which doesn’t have individual burners—to keep cooking utensils from flying around in rough water.

The key to successful cooking in a kitchen that moves, she says, is to keep moving the food around. With a boat stove, there is no such thing as setting the oven at 350 degrees and walking away from it for 40 minutes.

On windy days, the boat heels over a bit, which presents cooking challenges. If she’s baking brownies or a cake, she’ll put a shim under the pan so that one side of the dessert isn’t thick and the other thin.

Cooking on a boat is an all-day affair. Miller is up at 4 a.m. to get the stove warmed up and breakfast and lunch started. It takes a good hour to get a couple of pots of water boiling to make coffee for breakfast.

She makes all the meals from scratch. Dough for the eight loaves of bread she makes daily gets started first thing and rises through the morning. While she is serving breakfast, she gets lunch started and when she’s serving lunch, she has mid-afternoon snacks and dinner underway. Before her 8 p.m. bedtime, she’s readied her kitchen for the next day.

Miller, 36, had no sailing experience before she began cooking aboard schooners 15 years ago. She arrived in Maine from Vermont via North Carolina on vacation and stayed. She was cooking in a little restaurant in Deer Isle when she caught the sailing bug.

“Seeing these big schooners sail by every summer on Deer Isle, I just thought: that looks like it would be a lot of fun,” she said. 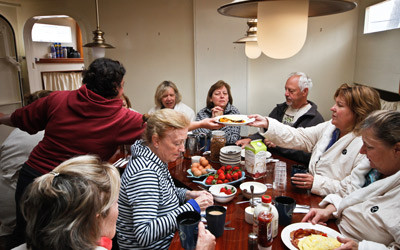 She didn’t have sailing skills, but she could cook, thanks to two Italian grandmothers who made food the center of family life. When she first applied to join a schooner crew, she had years of restaurant cooking under her belt and was enrolled in the culinary degree program at Eastern Maine Community College. And best of all, she knew how to cook on a wood stove—the sort of cooking stove on nearly all the historic schooners.

As any schooner owner will tell you, the most important job on the boat is the cook, said Jane Barnes, co-owner of the Ladona and her sister ship, the Stephen Taber.

“One of the most important things about running a windjammer is having good food because that’s why people come back,” she said.

Schooner cooks also must be great with people because on a boat, they’re cooking in front of passengers and interacting with them at the same time, said Barnes. And they must be super organized, thinking ahead about how to accommodate the dietary needs of guests and what provisions will be needed on a multi-day trip because sailing around remote Maine islands, you can’t just pop over to the IGA for more eggs.

“The thing about Anna is that she has everything you need,” she said.

Sailing guests agree. Online reviews are filled with praise for her cooking and her personality. One guest of the Stephen Taber’s, where Miller cooked before joining the Ladona last year, raved about her in a TripAdvisor review:

“The food was beyond spectacular. I can’t even begin to describe the feasts we had at every meal,” wrote famcruisefun from Connecticut. “The chef on the Taber—Anna—is reason enough to take this trip. Watching her work in the galley is fascinating. And her personality is a highlight of the Taber experience. She is a gem!”

As much as sailing guests enjoy Miller, she enjoys them. “I love meeting all the people that come on board,” she said.

In her galley kitchen, echoes of the meals of her childhood are recreated with tons of food, conversation, banter and laughter. She enjoys talking to guests about their lives and often swaps family recipes and cooking tips with them. “To make them feel warm and welcome is awesome,” she said. “I can’t believe we’re able to do this.” 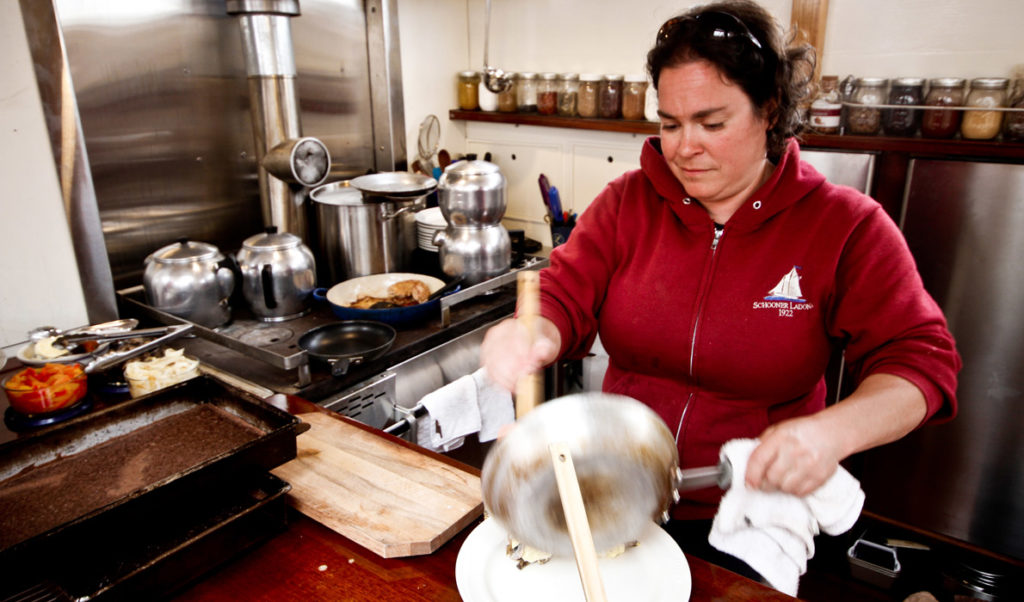 Anna Miller aboard the Ladona.