With summer (believe it or not) approaching, many coastal communities are gearing up for road projects. Increasingly, these projects incorporate components for bicyclists, but coastal towns and cities often have to get creative to make their communities bicycle friendly.

Take Bath and Brunswick, both designated “bike friendly communities” by the League of American Bicyclists, but both densely settled and constrained around rivers, the coast and U.S. Route 1.

“Our streets are relatively narrow, our homes are densely put together in our neighborhoods, and street volume and street speeds are very low, so it’s inherently safer for bikers and walkers,” says Deci.

That doesn’t mean Bath has nothing to do to make the city bike friendly. With its bike/pedestrian committee, city staffers created a bike/pedestrian plan that informs structural projects in the city, such as its North Street reconstruction project starting this summer.

Unlike most residential streets in Bath, North Street is fairly wide and could accommodate a designated bike lane in some areas. However, the city decided not to put in separate bike lanes, says Deci.

The reasoning here is one of consistency. North Street connects to the multi-use path along Congress Avenue, which leads into town and is part of U.S. Bicycle Route 1 and the East Coast Greenway, a shared-used trail system stretching from Florida to Maine, and in the future will be part of the Androscoggin to Kennebec Trail, which will connect Bath to the Androscoggin River Bicycle and Pedestrian Path in Brunswick.

Looking at that bigger picture, city planners and the bike/pedestrian committee decided to opt for consistency, planning on shared lanes along North Street instead of separate bike lanes. The North Street project also incorporates road signs alerting drivers of the shared lanes and bump outs that reduce vehicle speeds.

Context-sensitive decisions like those made for the North Street project in Bath is the best approach communities can take to become bike friendly, says Brian Allenby, communications director of the Bicycle Coalition of Maine, a bicycle advocacy organization based in Portland.

“Instead of putting in place a blanket solution, look at what will work,” Allenby advises. “What are the solutions and how do we appropriately apply them so they will be most effective, realizing it won’t be 100 percent everywhere, given budgets and the limitations we all face?”

While it is tempting to focus on the “big” things, like bike lanes, simple changes make a significant difference, he says, pointing to what Brunswick has done.

The Wheelers have raised money to pay for road signs the town has installed that remind drivers to give cyclists three feet of distance. The Wheelers also conduct bike safety training, produce materials detailing the best cycling routes in the area and sponsor weekly rides in the summer—all simple and inexpensive techniques that raise awareness about cycling.

As the town looks at connecting the Androscoggin River Bicycle and Pedestrian Path to Bowdoin College and Brunswick Landing, the former navy base, it is considering how to make Federal Street more bike friendly.

“Federal Street is perfectly and uniquely suited to allow cyclists access to many important and highly used parts of town,” Doxsee says.

Presently, the bike/pedestrian committee is proposing to the town council a project for Federal Street to add signage and paint sharrows on the roadway to alert drivers that cyclists are sharing lanes with them.

Road signs and shared lanes are popular options coastal communities take to be bike friendly. Here are some other ideas:

Make bike racks available. Last summer, the city of Ogunquit ran a bike rack decorating contest to raise cycling awareness and get the community involved and excited about cycling, says Charley LaFlamme, chairman of the city’s bike/pedestrian committee and founding member of the Bicycle Coalition of Maine. Ogunquit’s police department decorated a rack to look like the bars of a jail and businesses in Perkins Cove decorated a bike rack with a lobster boat and lobster buoys.

Tell people where to go. Like Brunswick and Harpswell, identify the best cycling routes in your community and then use websites, pamphlets and brochures to let people know about them. 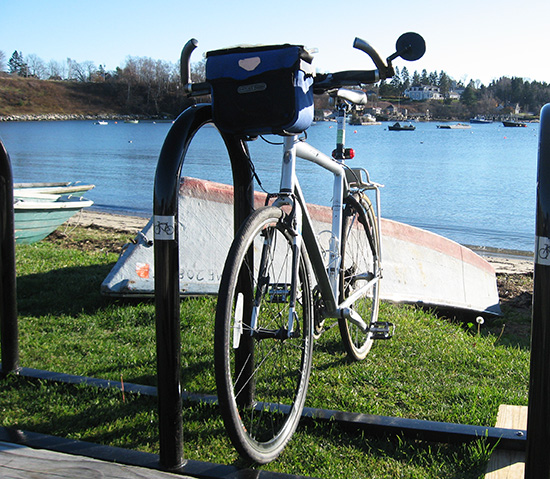 A bike rack near the shore in Harpswell.

On the record with... Sebastian Belle of the Maine Aquaculture Association