People in Bar Harbor are in the grip of a fundamental tension.

The downtown and waterfront are swarmed by visitors arriving by land and cruise ship every year. Crowds spill into Acadia National Park, where visitation was up 17 percent year-to-date by the end of August, making for the third record-setter in a row, and putting the park on track for exceeding 3 million visitors in 2016.

It’s great for business. But a proposal to add a second cruise ship facility, at an old ferry terminal just outside downtown, make some wonder if that would mean more visitors—and how many more can the town take?

Or it might relieve congestion, others said. Currently, passengers are tendered en masse to a downtown facility.

At the Bar Harbor Planning Board’s information meeting on Oct. 14, John Henshaw, the Maine Port Authority’s executive director, said that group has negotiated a $1 million, three-year lease from the property’s owner, the Canadian government, with a $2.5 million purchase option anytime in that period.

The port authority is working on a risk analysis to determine if that’s an appropriate investment, before signing the lease. Factors under review include economic benefits and how the facility could help Bar Harbor manage growing cruise ship visitation.

If the property is purchased, the port authority and state Department of Transportation would seek a third-party investor to develop and operate the facility.

Residents citing vehicle, harbor and pedestrian congestion said the town should decide what it wants to look like before moving forward.

“Cruise ships are a big part of our economy,” said Doreen Willett. “But how much more can we take? This year, the centennial, just trying to get around town was difficult. We need to think about how much we can actually accommodate,” she said.

“There’s never been a clear idea of how many visitors we want in this town,” said Dennis Bracale.

“This is really a very small town,” said another resident. “We’re way out of proportion in terms of the size of the ships and the number of ships that come in here. We’re losing our character as a small town. Once we lose it, it will be difficult to get back. The whole idea that if we don’t have a pier then the larger ships won’t come in—we can only hope that will occur.”

“We believe that not partnering with the port authority to purchase this terminal could be detrimental to this town,” said Martha Searchfield, the Bar Harbor Chamber of Commerce’s executive director. “If this opportunity passes us by, it would not come back around.”

Businessman Eben Salvatore said the three-year window is “a once-in-a-lifetime chance” to see if the project is something the town wants to do.

“The Canadian government wants to get rid of the land,” said Salvatore. If it goes to a private entity, “There are a lot worse things that could happen to this property.” 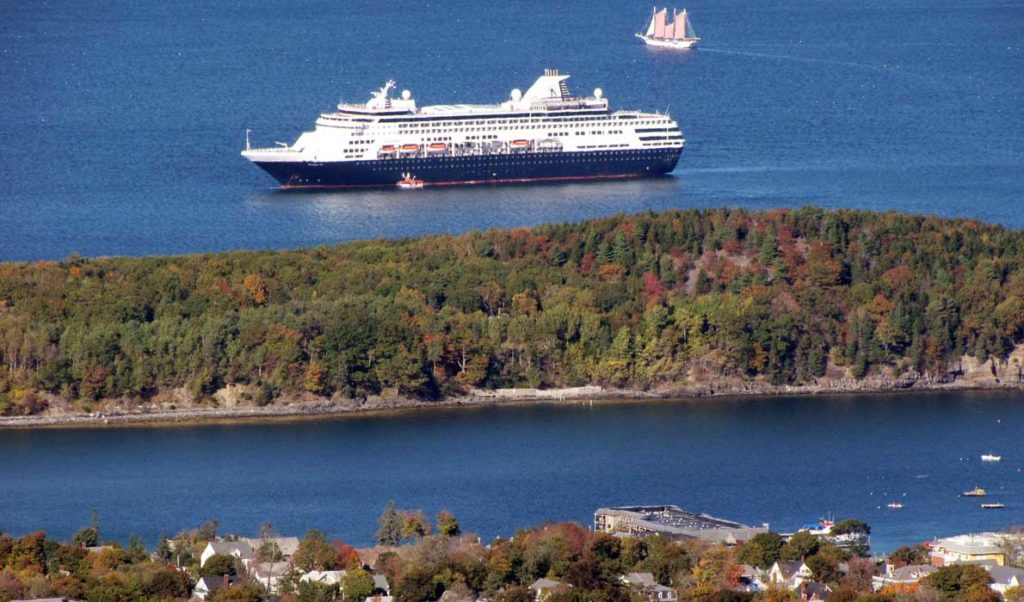 A cruise ship off Bar Harbor.