The first time Aaron Sprague and Karen Roper sat down in a yurt, owned by a friend in Maine, they experienced a deep sense of calm.

“It was such a cool space and we thought, ‘Wow, this is amazing!'” Sprague recalled. “I couldn’t get over how nice it felt.”

Sprague and Roper have been busy this past winter getting four yurts up and running in time for the early June opening of their new weekly rental business, Acadia Yurts, on a 4.8-acre wooded parcel in Southwest Harbor.

A yurt is a portable, circular dwelling used for thousands of years by nomadic people of Central Asia. National Geographic describes a traditional structure of wood lattice and cross-poles covered with felt, a domed roof and a crown that’s partially open to allow air to circulate and a chimney to penetrate.

The yurts here are adapted structures that came as kits from the Colorado Yurt Company. A canvas-polyester fabric lined with reflective foil insulation covers wood lattice, poles and rafters. A fiberglass-dome skylight tops the roof, providing a view of the sky. The yurts sit on insulated cement slabs; standard stick-framing provides interior partitions for bathroom and kitchen, fitted with modern appliances, including a mini-split heat pump.

The couple went the way of the yurt partly because of the inherent feel of the round house, said to conform more efficiently with nature than square homes. Partly, they want to create the sort of community they’ve experienced during their travels.

Sprague grew up in nearby Trenton, went to school on Mount Desert Island, graduated from the University of Maine and returned to Bar Harbor to work in hospitality and real estate. Roper, originally from Chicago, also works in hospitality and teaches yoga. The two started dating a couple of years ago—and began hatching the idea of offering yurts for weekly rentals.

The idea stems from various experiences they’ve had, separately and together.

Roper’s childhood was shaped by parents who love to travel, including work trips, with their church, to South Africa and Guatemala.

“Holidays, we didn’t sit down and have all these gifts. We all went somewhere to have an experience together, versus just collecting more things,” she said. “That’s something Aaron and I have carried over.”

Two winters ago, Roper and Sprague took their own work trip to Maui. They worked on a small organic farm that was also a retreat with classes related to farming, interpersonal relationships and community.

“I grew up in a small community, but I don’t know that I ever appreciated small community,” said Sprague. “These were great things that I’d never been exposed to. We wanted to bring that feel back here to our yurt idea, and mold it all into one cohesive business and offer that to the community.”

“Most people drive here, and they have their kayaks and bikes and dogs and kids, and they like renting a house where they can make a couple of meals and not spend all their money out,” said Sprague. “That’s how we like to travel, also.”

Originally, they thought they’d build in Bar Harbor, the island’s tourism center. But a contractor they were working with happened to own the old White Birches Campground on an out-of-the way road in Southwest Harbor and a stone’s throw from the “Quiet Side” portions of Acadia. The campground had closed. But, said Sprague, Southwest Harbor’s growing tourist market seemed ripe for additional lodging options, particularly one with an alternative flair. One day last August, they visited the old campground.

“We were sitting on a stump and we listened,” said Sprague. “What do we hear? We don’t hear the whirr of Route 3. We don’t hear traffic. It’s nice and quiet. It’s that Maine, wooded, classic feeling. So we combined the romantic idea of being out in the Maine wilderness and this cool, funky yurt, but have a lot of the amenities people are looking for.”

Already, they’re half-booked through the summer. Ultimately, they plan to have eight yurts and a multi-purpose building open to community use.

“Southwest Harbor feels so far away from the draw of downtown Bar Harbor,” said Roper. “But once you get to this side, you realize how nice it is here. We wanted to run a quiet retreat, where people get close to nature. It’s funny, when we sat down to write our top ten things to do on the island, it’s all here. A lot of the hikes, Acadia, the beach, Echo Lake, Wonderland, sailing tours. Our favorite things to do are in Southwest Harbor. Why wouldn’t we be in Southwest Harbor? So it sold itself to us.”

Rates for July and August are $975 per week. For more information, see acadiayurts.com 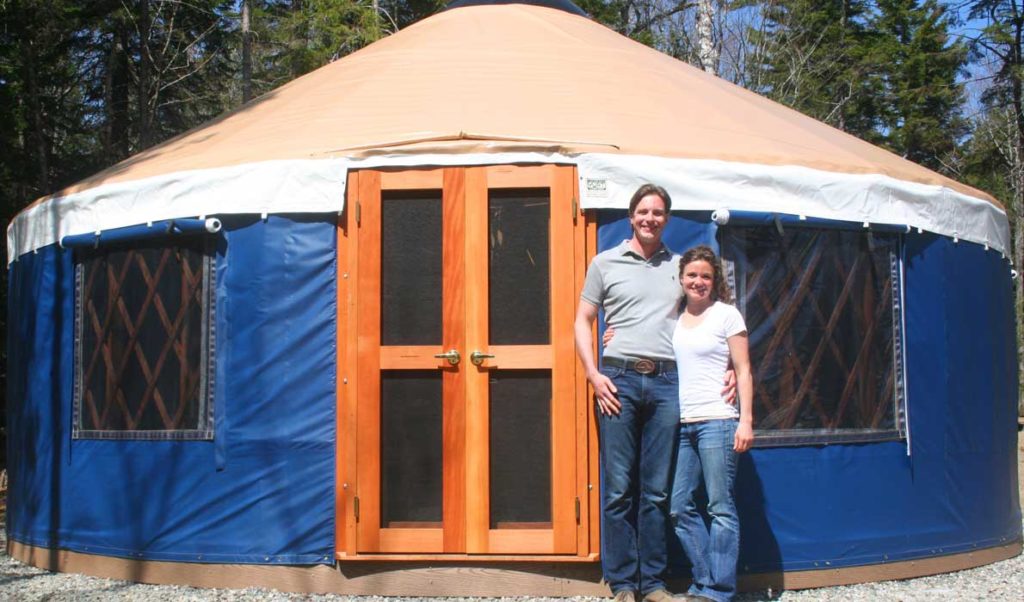 Aaron Sprague and Karen Roper are adapting the yurt for visitor lodging.