The award-winning children’s book author and illustrator Ashley Bryan from Islesford (Little Cranberry Island) often concludes his storytelling performances with a remarkable recitation of Langston Hughes’s poem “My People,” asking his audience to repeat the lines after him. Everyone goes away with the last line echoing in their heads: “Beautiful, also, are the souls of my people,” and that pleases Bryan, who has always made a special case for the beauty and strength—and importance—of Hughes’s verse.

Bryan continues his mission to raise awareness of the Joplin, Missouri-born poet (1902-1967) with the publication of Sail Away (Atheneum Books for Young Readers). This selection of 15 poems by Hughes relate to water: the sea, rivers and even the rain.

As Bryan noted in a recent telephone interview, growing up in the Bronx he had to discover Hughes’s poetry on his own.

“Black culture was not a part of any of my school’s studies in elementary, junior or high school,” he recalled. Beyond Booker T. Washington, George Washington Carver and, sometimes, Paul Lawrence Dunbar, he said, one would have to make “your own excursions” in order to find African-American figures of note.

Bryan chose Hughes’s poems of the sea because he wanted to introduce them to children.

“They should be as accessible to young readers as Mother Goose rhymes or A Child’s Garden of Verses or Eugene Field’s work,” he said. He has always sought to introduce the cultural contributions of black artists into the classroom, often using his own art to do so.

Asked about the process of illustrating the Hughes poems, Bryan notes that words always evoke images. He goes over the lines, speaking and singing them. That he lives by the sea helped him respond to the verses.

As he had with his first collage book, the best-selling Beautiful Blackbird (2003), Bryan used his mother’s dressmaking and embroidery scissors to create color paper collages. He loves the drama that collage can provide: “You are taking plain colors and seeing them come to life as you put one next to the other.” He also likes the fact that this medium is known to schoolchildren.

Asked about specific illustrations in the book, Bryan recites a Hughes poem over the phone and then talks about the designs that accompany it. For example, for the four-line “Trip: San Francisco” with its image of bridges “spun across the water/Like cobwebs in the sky,” he came up with an arrangement of linear shapes to represent the complex structures.

Bryan’s main mission, he says, is to “stimulate thinking about language, what words can do.” He points to Hughes’s fish with its “greedy eye.” How to render such an image? The great finned creature Bryan came up with recalls some of the stylized paintings of animals by the Pacific Northwest Indian artists. “Everything that happens in art happens in the world of picture books,” he states.

The artist likes to imagine some of these poems going viral.

“A child reading ‘April Rain Song’ might very well go out in the rain and remember the line: ‘Let the rain kiss you,’ and a friend might hear it and pass it along.” To the suggestion that children need to get out in the rain more, Bryan is enthusiastic. “They should not race away from it,” he says. “Let them take part in the elements.”

Today, at age 92, Bryan is as active and honored as ever. The Maine College of Art awarded him an honorary degree at its May commencement. In September, the Redeemer Lutheran Church in Bangor unveiled a stained glass window, “The Welcome Table,” designed by Bryan. He and fellow Islesford painter Henry Isaacs led another Labor Day weekend workshop on the island (with graphic artist Gareth Hinds joining them this year). Bryan also kicked off the Bar Harbor Kids’ Book Festival with a rousing keynote at the Criterion Theater in early October.

In a recent article in Kolaj magazine, “Ashley Bryan and the Art of Collage,” critic Daniel Kany notes that “Art is energy. Art is work. Art is mission.” He might have added that art for Bryan is also visual pleasure, as he transforms the sea and ships and sailors into something magical and memorable. Sail Away is a masterpiece.

The Wendell Gilley Museum in Southwest Harbor is hosting the exhibition “A Visit with Ashley Bryan” (through Nov. 15), an extraordinary retrospective of his life and art organized by the Ashley Bryan Center. The exhibition features clips from a new video portrait of the artist now being completed by filmmaker Richard Kane of Sedgwick as part of the “Maine Masters” series. 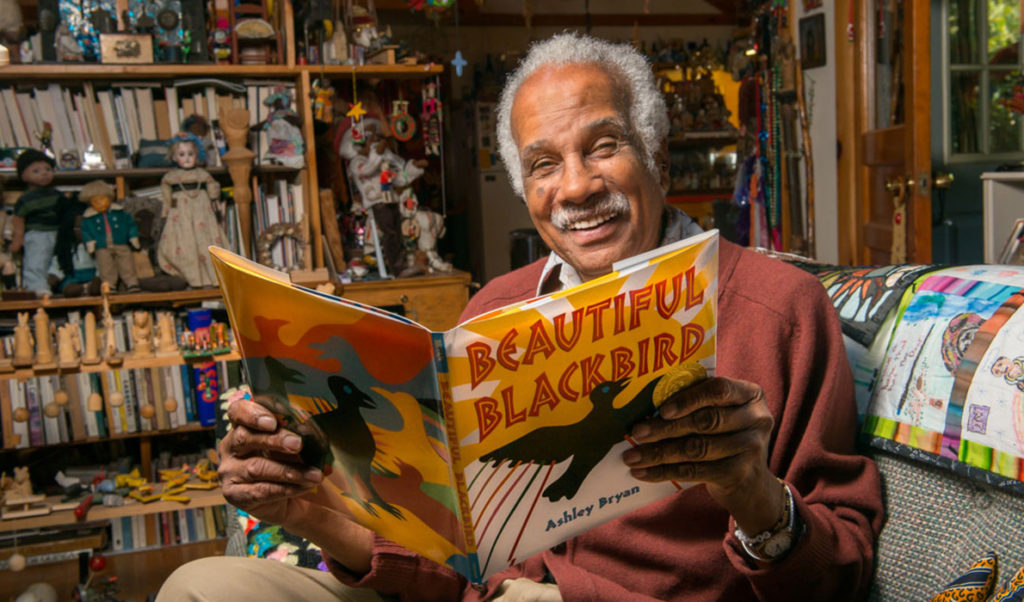