The scene sounded more like something from a classic caper movie than the art exhibition world.

Speaking at the Island Institute’s Artists and Makers Conference in Northport on April 5, Suhail Bisharat, who helped launch and served as director of the Jordan National Gallery of Fine Art, described one acquisition that didn’t go smoothly.

A well-known Middle Eastern artist, Hamed Nada, agreed to donate two of his works to the Jordanian gallery. But the paintings were being shown in a private gallery in Cairo, Egypt, at the time, and the gallery owner was not keen on letting them leave. After some tense negotiation, Bisharat emerged onto the crowded streets of the city with the paintings.

But he was unable to hail a cab. Suddenly, a horse and carriage for hire appeared, and Bisharat seized the opportunity to escape, albeit slowly.

“We galloped off in excitement,” he said to laughter from conference participants. “It was an extraordinary way to collect work for a national gallery.”

A theme that emerged in Bisharat’s remarks was that often, there is no playbook to rely upon in the art world.

Though Jordan is known as being at the crossroads of the Middle East, geographically and culturally, its artists tended to look to the West for recognition, he said.

“In the Arab world, the earliest museums were associated with archaeology and antiquities,” he said, so the idea of creating a national gallery for fine art was not readily understood or supported.

Bisharat, who lives on Chebeague Island, is himself an artist, and described a technique he used, “painting” on canvas with coffee. In 1978, he was operating what he described as “a hole in the wall” private gallery when he was asked by a government official to take on the task of establishing the first national gallery. Both his brothers advised against it. 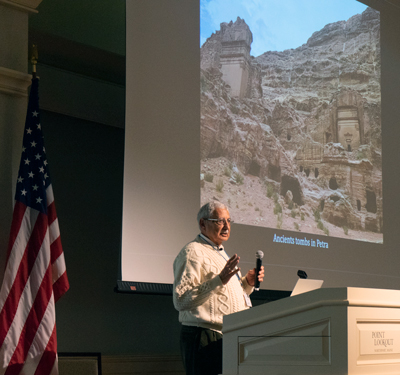 “Nothing like this existed in Jordan,” he explained. “Jordan is a small country—no oil production, not rich. But it’s open to the rest of the world,” and so, despite the brotherly advice, Bisharat took on the challenge.

The gallery began in 1981 with fewer than 50 works, more than half on loan. But he and his staff persevered, aiming to keep Jordanian artists well documented and respected. Collecting was accomplished piecemeal.

“It was an ambitious challenge,” he recalled, but soon, other countries wanted to be associated with the gallery, including Egypt, Iraq, Morocco, Kuwait, Senegal, France, and Turkey. For Turkey, loaning art to Jordan was “the first time the government allowed” such a move.

“Artists felt they were being recognized for the first time,” he said.

A new building was constructed during Bisharat’s tenure, though he recounted an effort to secure some art from Great Britain in which he was asked about climate control technology at the gallery.

“We open the windows, and the staff use fans,” he told the man, who would not let art be shared with the Jordan gallery. But ever persuasive, he added: “I didn’t go back empty-handed.”

Bisharat left Jordan and the gallery in 1993 when his wife Leila began working for UNICEF at the United Nations.
Bisharat noted that two Maine artists featured at the conference, Robert Shetterly and Jesse Salisbury, had both visited Jordan.

“We need to encourage more of these international exchanges,” he said, and concluded his remarks asserting: “Museums are the trophies of peace.” 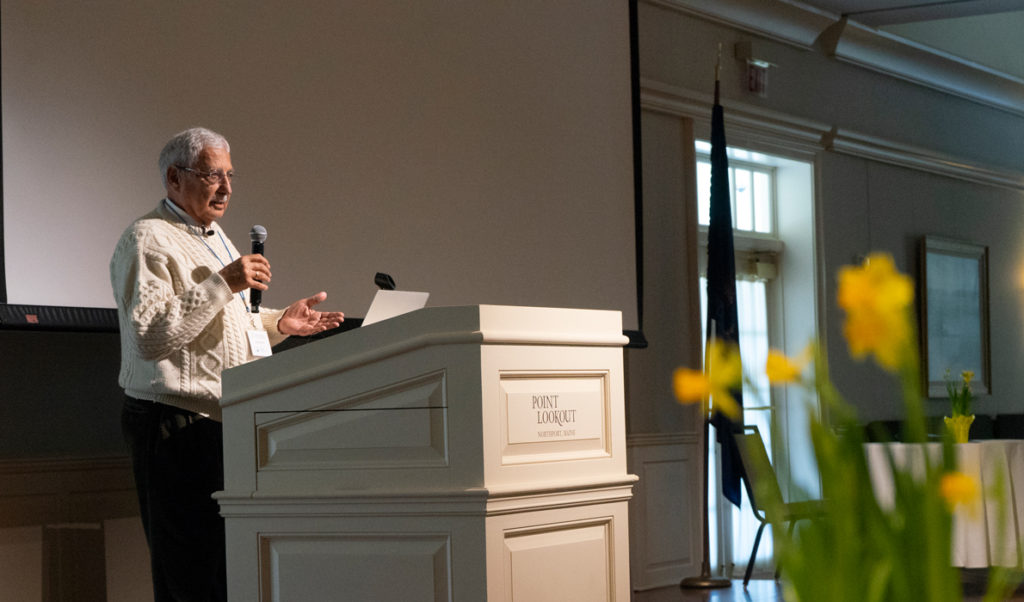