There has been a lot of curiosity about the reported decline of blue mussels along Maine’s coast. Over the last year, we have visited 32 coastal towns and islands, from Portsmouth to Eastport, sharing our Climate of Change documentary film series on the impacts of climate change on fisheries and fishing communities. At nearly every showing, we have heard the question, “Why have the mussels disappeared?”

The answer is not simple, and it seems to depend on the characteristics of the habitat and where you are along the coast.

Phil Yund, a senior scientist at the Downeast Institute in Beals, studies mussels in eastern Maine.

“Most mussels do not predominantly live on exposed rocky shores, and they never have,” he says. “They live in immense beds way up in estuaries on flats with just enough grit to hang on to, neck and neck with the clams.”

These beds are huge, hosting 10-30 million animals each. In this part of the state, the mussels that are living on the rocky shores are the overflow from those living in these large subtidal beds. Yund, who is a larval ecologist specializing in the connectivity of marine populations, explains that of the beds he monitors, several are well established and growing, while others are declining in size.

Along the southerly coast, exposed rocky shores are a more important habitat for mussels. The subtidal, estuarine beds also exist, but not to the extent they do Downeast. And there is no doubt that mussels are declining in many of these exposed habitats. Near the Bowdoin Coastal Studies Center, “Mussel Beach” is now devoid of mussels, yet there is a large, intact subtidal bed just offshore, and the lab’s seawater system gets enormous amounts of (unwelcome) larval settlement.

When asked if green crabs are the culprit, Dave Carlon, the center’s director, says, “We don’t see super high abundances of green crabs in the intertidal, but there are much greater numbers subtidally.” A conundrum, indeed. So, what has happened to the intertidal mussels? “It’s a great question,” says Carlon, and suggests the answer may be “potentially episodic recruitment combined with elevated predation.”

Bob Steneck, a marine ecologist from University of Maine’s Darling Marine Center, has monitored mussels at Pemaquid Point for 25 years, including mapping juvenile populations. He notes that small mussels are readily eaten by green crabs. However, mussels can live to be 25 years old and may quickly reach a size where they can no longer be lunch for crabs. Steneck wonders if green crabs on the southern coast eating small mussels combined with human foraging for larger-sized mussels, which became popular in the 1970s and 1980s, has left many of Maine’s shores without mussels. Old photos from the early 1970s show large (and so old) mussels in the intertidal zone, and, even today, huge mussels persist in areas that are out of reach of foragers.

Peter Stocks grows mussels on lines in Casco Bay and in Blue Hill. His lines are seeded from wild mussel larvae in the water column. His business, Calendar Island Mussel Company, is coming up on its fourth harvest.

“From a farmer’s perspective, there are still a lot of mussel spat,” he says.

Of the six active mussel farms in Maine, he reports that none of the operators are having problems getting seed.

“Only one time in the last 15 years has someone had a problem getting a set. We have a plethora of spat settling on our lines, but if you talk to people who drag for mussels in Casco Bay, there are only pockets remaining,” Stocks continues. “The mussels I used to see in Back Cove three to four years ago are now gone. I don’t have an answer why.”

Two years ago, Friends of Casco Bay volunteers conducted a coarse assessment of the mussel bed maps from the most recent Department of Marine Resources mussel survey. In the majority of cases, there were no longer any mussels to record in the places formerly identified as beds. Again, while many of these seafloor beds had disappeared, mussels are still settling on lines and pilings in the bay.

A cause for optimism is the hardiness of this species. Sarah Kingston, also of the Bowdoin Coastal Studies Center, is a molecular ecologist and along with Carlon has conducted experiments to determine the adaptive potential of mussels in the face of a warmer and more acidic ocean. They found that mussels’ genetic variability may allow populations to adapt to grow in stressful conditions. So, whatever it is that may be knocking the mussels back, here’s to the next generation of more stress-tolerant mussels! 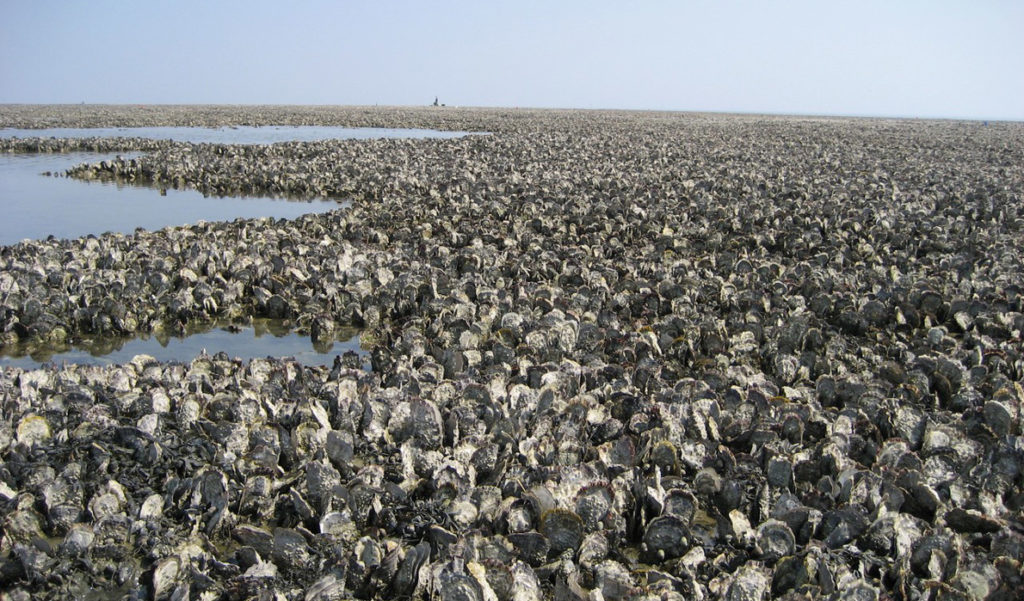