The Andy in the title of the exhibition “Andy and Kosti” at the Farnsworth Art Museum (through Nov. 1) is Andrew Wyeth (1917-2009), one of America’s foremost realist painters who found his muse along Maine’s Midcoast. Kosti is Kosti Ruohomaa (1913-1961), the photojournalist who gained renown for his photo essays about the people and landscapes of Maine, which appeared in Life, National Geographic and other publications.

The two men were friends. According to Wyeth, they first met in 1950 when Ruohomaa knocked on his door. Their friendship was based on mutual admiration, but they also shared an artistic sensibility: both of them depicted Maine and Mainers with a clear yet poetic eye.

The exhibition features about 20 watercolors and a handful of pencil and India ink drawings by Wyeth, mostly from the 1940s when he was proving himself a worthy successor to Winslow Homer (see Clouds and Shadows, 1940). Such iconic images as The Road to Friendship, 1941, and Wood Stove, 1962, testify to his sense of place and to his prowess at rendering a specific season and setting.

While Ruohomaa could capture a landscape—a classic view of Pemaquid Point is included in the show—his true forte lay in portraits of Mainers: fishermen netting sardines, a man painting lobster buoys, loggers playing cards at camp, citizens standing up to speak at town meeting. He had an eye for the dramatic: a photograph of Maine fishermen aboard a dragger on the Grand Banks might be a still from The Perfect Storm.

As the 20 or so black-and-white prints in the show evidence, Ruohomaa was a photojournalist first and foremost. He was also “an unabashed Mainer…[who] made pictures that would never appear on travel posters,” observed Dale Kuhnert, former Down East editor, in his introduction to Lew Dietz’s classic Night Train at Wiscasset Station, which was illustrated with Ruohomaa’s photographs.

And, as the Farnsworth show reveals, the Finnish-American camera artist was a sometime painter: the 1935 view from his family’s homestead on Dodge’s Mountain in Rockland might pass for an Andrew Winter canvas (this painter appears in one of Ruohomaa’s photographs of lobstermen on Monhegan).

The exhibition highlights the connection between Andy and Kosti by way of the Olsons in Cushing, most notably through images of that farming family’s hayrack. Wyeth’s watercolor Alvaro’s Hayrack, 1958, shows the hay holder in a seaside field, its braces and stays resembling the masts of a small ship. The same rack is partially visible in Ruohomaa’s untitled photograph of Wyeth and Alvaro Olson conversing behind the Olson house.

Ruohomaa is also the subject of a major exhibition at the Maine State Museum, “The Passionate Photographer: Kosti Ruohomaa’s Maine in Magazine Photojournalism,” which opens July 15 and runs for a year. The photographs and related materials, including his personal scrapbooks and albums, will be displayed in a newly constructed and designed gallery that will serve as the principal venue for exhibitions of 2-D works.

In conjunction with the show, Deanna Bonner-Ganter, the museum’s curator of photography, art, and archives, is publishing a biography, Kosti Ruohomaa: The Photographer Poet (Down East Books).

Both shows are a part of the year-long statewide Maine Photo Project organized by the Maine Curators’ Forum. More than 20 museums, art galleries, historical societies and other organizations are participating in this remarkable initiative. “Andy and Kosti” is one of many offerings highlighting Maine’s pre-eminence as a state of photography—and art. 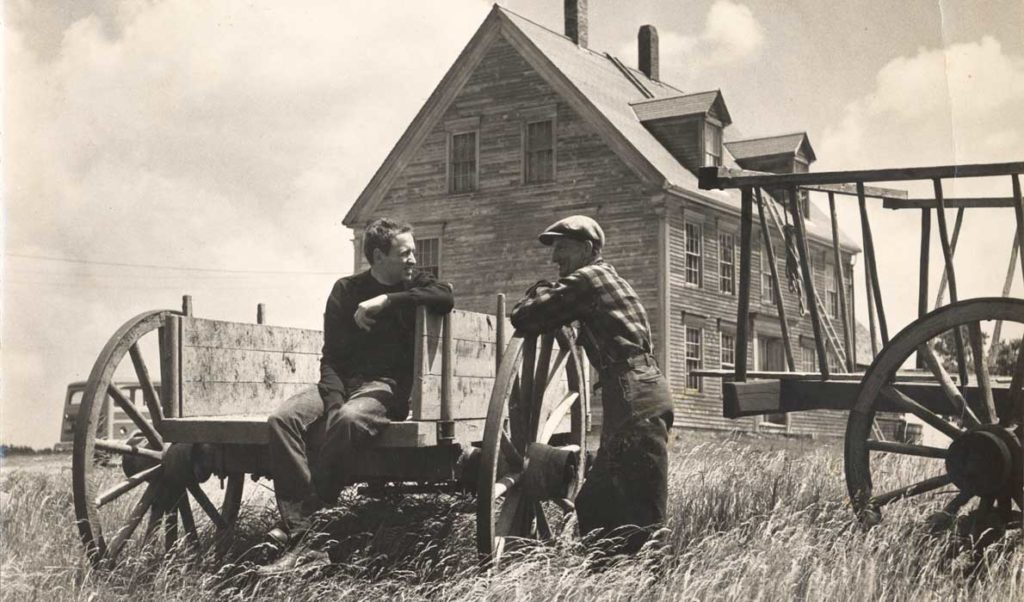 This untitled photograph by Kosti Ruohomaa shows Andrew Wyeth and Alvaro Olson at a hayrack.