About 15 minutes into his presentation at the annual meeting of the Maine Lobstermen’s Association during the Maine Fishermen’s Forum on March 6, U.S. Coast Guard Commander Jason Boyer began shedding his uniform. It wasn’t a strip tease, exactly, but it was a deliberately provocative move.

When Boyer removed his uniform jacket, he revealed that he was wearing underneath it a personal flotation device, or PFD, the kind that looks something like a snake draped over the shoulders and chest. A drawstring, easily visible from the audience, would be pulled to inflate the device.

The stunt was aimed at undermining a universal argument fishermen use to explain their unwillingness to wear a PFD—that it’s uncomfortable and inhibits the ability to work. Boyer, whose job title is “chief of prevention,” raised and moved his arms around to further demonstrate the ease of wearing this particular device.

When the Coast Guard inspects fishing boats, he said, fishermen readily dig out the required life vests, “excited to show us,” yet the PFDs are in their original plastic packaging with the price tag still attached.

As far as Coast Guard safety goes, the lobster fishery is “the least regulated commercial vessel” sector, Boyer said. “How do we change the culture of not wearing life jackets?”

One way of changing that culture was proven in Alaska. Boyer said coast guard officials couldn’t make headway in changing the culture among adult fishermen in Alaskan Native villages, so they went to schools, met with students whose parents fished, and worked with them to draft a contract which they would present to their parents.

The children would then ask their parents to sign the contract, agreeing to “Do everything I can to come home.”

Emotional blackmail? Perhaps. But given the low rate of PFD use, and what Boyer described as a “rite of passage” for those reaching the age of 13, when they no longer are required to wear the device, change is needed, he said.

A “life jackets for lobstermen” program run by the Northeast Center for Occupational Health & Safety visited 53 ports where 1,076 PFDs were sold in recent years. In Maine, 774 PFDs were sold, Boyer said. The Maine Lobstermen’s Association also was a partner in that effort.

He also urged fishermen to include “kill switches” for their boat’s engines, and to install anti-entanglement devices to avoid getting caught up in gear going overboard. 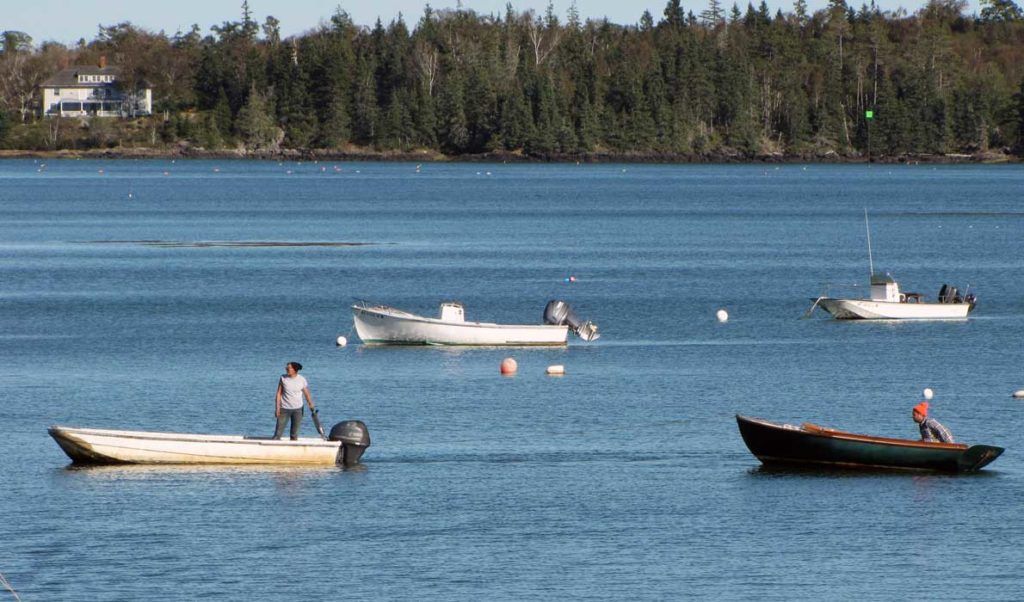 One fishermen uses a skiff to tow a skiff with another fisherman in the Fox Islands Thorofare.